Handing Out the NFL’s Quarter-Season Awards 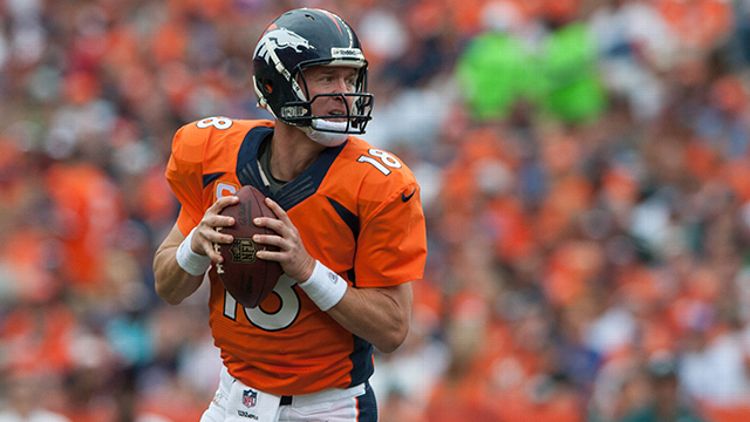 During Monday Night Football, Jon Gruden noted that every one of the coaches he knows (which is presumably a lot of coaches) breaks up the season into four quarters. It’s their way of breaking down the season into manageable chunks; if you can go 2-2 in each quarter, you’re doing a decent job. That logic is good enough for me, mainly because it allows me to get away with doing one of my favorite columns: short-term awards! I would do an awards ballot every week if I could get away with it. Once every four weeks is actually pretty good, since it strikes a reasonable balance between putting things in perspective and updating the bigger picture with a meaningful amount of new information.

Comeback Player of the Year

This is one of the most difficult awards to give out so early in the season, just because so many comebacks reveal themselves over the course of an entire season. Through four weeks last year, Adrian Peterson was good, but he didn’t really hit his stride until the second half of the campaign.

So far in 2013, I’d consider the Comeback Player of the Year to be Terrell Suggs. Suggs technically came back from his torn Achilles last season, but he was a shell of his former self and gutted his way through the end of the regular season and the playoffs at about 50 percent. This year, Suggs is back to his old ways. He has four sacks and 10 quarterback hits through four games, and he looks better on tape than he does on the scoresheet; Suggs is consistently impacting plays in the way that he did before the Achilles injury. That’s enough for me to push him ahead of Philip Rivers (coming back from Norvitude) for Comeback Player of the Year.

Coach of the Year

I think it’s a dead heat between Andy Reid and Sean Payton. It’s hard to argue against picking any head coach who has managed to double his team’s win total from the previous year before October 1, and Reid has done a phenomenal job in building an offense that fits his roster while getting the most out of his talented core of defensive players. Kansas City’s offensive line is playing well (besides, perhaps, first overall pick Eric Fisher), and the Chiefs have become a dangerously efficient team in the vein of the 2011 49ers.

On the other hand, there’s Payton and his 4-0 Saints. We saw the impact that Payton’s absence had on the Saints last year, and while part of their improvement has been driven by the arrival of new defensive coordinator Rob Ryan, Payton has helped restore Drew Brees to his former heights and managed game situations better than his assistants did a year ago. While Reid brought his 4-0 team from deeper straits than Payton, the Saints feel like a better 4-0 team than the Chiefs. I’d probably lean Reid, but I wouldn’t argue if you preferred Payton.

This is one of the easier choices on the list. While I’ve been impressed by safeties like Kenny Vaccaro and Eric Reid, the clear favorite for Defensive Rookie of the Year is Bills middle linebacker Kiko Alonso, who has become a team leader and playmaker after just four games. With the Buffalo secondary ravaged by injuries from day one, Alonso has been a force to be reckoned with in the middle. His range as a defender allows him to cover just about any tight end or running back creditably, and when balls get tipped in the air or thrown away from their targets, Alonso has been picking up free opportunities for takeaways. He’s tied for the league lead with four interceptions through four games. Alonso is also another success story for trading down; the Bills acquired the second-round pick they used to draft Alonso by trading down in the first round. The major pieces in that trade ended up becoming Tavon Austin for Alonso and EJ Manuel; it’s ridiculous to judge it after four games, but if you’re in the mood to be ridiculous, it has been a huge win for the Bills so far.

Would you believe that it’s another second-round pick? Geno Smith is still going through some pretty noticeable growing pains, but he has been a competent quarterback at the helm of a Jets offense that is mostly connected by duct tape. Injuries haven’t made that job any easier, but Smith has shown an ability to create big plays with both his feet and his arm. He seems like a lackluster choice after last year’s bevy of rookie superstars, but Smith is a superior option to the likes of DeAndre Hopkins or Giovani Bernard.

With apologies to a host of competitive candidates — Daryl Smith, Robert Quinn, NaVorro Bowman, and Richard Sherman come to mind — this is a two-man race between J.J. Watt and Justin Houston. Houston has been more productive as a pass-rusher, with 7.5 sacks to Watt’s 3.5. Watt has hit opposing quarterbacks 10 times to Houston’s eight, though, and he has more tackles for loss (eight to six).

I’ll take Watt more so from what I see when I watch these two guys play. I love Houston and think he’s a phenomenal football player; his closing speed is incredible, and he does a great job of getting to the quarterback. Watt, though? He’s in a class of his own. Nobody influences opposing offenses on a play-by-play basis like Watt, who seems to live in the offense’s backfield to an extent that no other defender in football can. Watt may not produce the same pass-rushing totals he did a year ago, but his impact as a two-way defender and a lane eliminator make J.J. Watt the Defensive Player of the Year through four games.

Since the unwritten rules of award voting suggest that the MVP can’t win Offensive Player of the Year, I won’t consider my MVP pick for this award.

That leaves a couple of viable candidates. Do you pick LeSean McCoy for all the excitement and missed tackles he has created during the season, considering he leads the league in rushing after four games? It’s defensible. Personally, I’m opting for Drew Brees, mainly because I think you have to be head and shoulders above the crowd as a running back to justify beating out a quarterback for any award, and McCoy isn’t that far ahead of Adrian Peterson after four games.

Brees is back to his usual tricks with Payton around. His completion percentage isn’t in the 70s like it was a couple of years ago, but it’s back up from 63 percent last year to 66.9 percent in 2013, a noticeable improvement. He’s averaging 8.6 yards per attempt, which would be his best figure as a pro. The two small downsides are that he has already thrown four picks and he’s taking sacks at roughly twice the rate he has during his first few years with the team, but I think both his interception rate and sack rate will slide down as the season goes along. He’s been incredibly efficient in back-to-back wins against the tough pass defenses of Arizona and Miami, so he should be even better once the schedule gets easier. He’ll find it hard to catch my MVP candidate, though …

How can anybody select anyone other than Peyton Manning through the first four games of the year? He has been downright surgical through four games, completing 75 percent of his passes, averaging 9.4 yards per attempt, and throwing 16 touchdowns against zero interceptions. Among passers with 100 attempts or more through the first four games of their season, Manning’s figures are second-best in completion percentage (Tom Brady, 2007), ninth-best in yards per attempt, tops in passer rating, and tops in touchdown-to-interception ratio (infinite, since it’s still 16-to-freaking-zero). He’s the conductor at the helm of the best offense in modern NFL history through four games, and that’s while losing his star left tackle, Ryan Clady, in the process. Even if he doesn’t quite keep up these lofty heights, Manning’s still the clear favorite to win his fifth MVP award with 12 games to go.

What We Learned on NHL Opening Night