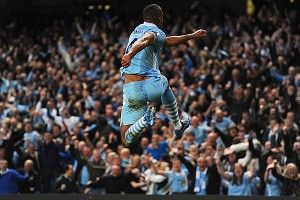 Story lines abound as the English Premier League enters the sharp end of the season. On Monday, Americans everywhere feigned illness to slip out of work and into the nearest Irish pub to watch the seismic Manchester Derby. City’s victory nudges them ahead in the tightest title race finish in 23 years, and the Men in Blazers couldn’t be happier. In this week’s pod, Michael and Roger review the crap game of football that yielded managerial handbags, Vincent Kompany’s winner, and the appearance of soccer’s most famous father-in-law, Diego Maradona.

Plus, they take a look at the moral victories that weren’t for Liverpool and Chelsea, welcome Reading and Southampton, the first two sides slated for a return to the Premier League next year, and analyze the appointment of Roy Hodgson as England manager.