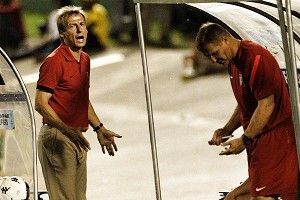 The international break brought both headache and relief after the Mighty Von Trapps split a pair of World Cup qualifiers with menacing Jamaica. In this week’s pod, Michael and Roger (fresh off a trip to Columbus for the return leg) recap what went right and wrong for the United States. Luckily, there was much Cherun and Doloing in the 1-0 home victory.

But the Blazered Men aren’t only concerned with CONCACAF. The team behind Fox’s new series Being: Liverpool join to discuss what it was like to go behind the scenes with the famed club. Among the highlights: the Brendan Rodgers portrait in Brendan Rodgers’s living room.