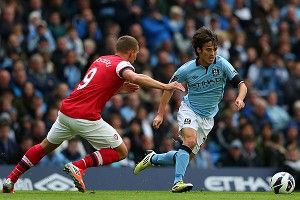 Even after being shut out of the Emmys, the Men in Blazers were still riding high from what was arguably the best weekend yet of Premier League football. Since the week before, anyway. Sure, midfield-less Manchester United triumphed in typically suspect fashion against 10-man Liverpool, and Chelsea and Manchester City continued their uninspired play in a win and a draw, respectively. But somehow, some way, Everton and West Brom find themselves in the Top 4 in the Season of Weird™. In this week’s pod, Michael and Roger recap all the story lines both real (John Terry retiring from international play) and surreal (Mario Balotelli and Carlos Tevez share a cuddle), and answer more hard-hitting telegrams.

In the end, though, it all comes back to #QuarterbackStyle as the Blazered Ones announce the winner of the anonymously signed Stoke City jersey. This is football podcasting at its most suboptimal.