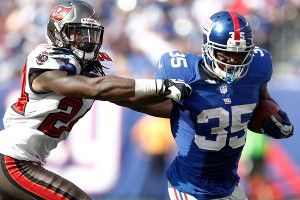 As an organization, the Giants get a lot of things right. They have a competitive advantage when it comes to identifying and developing pass rushers and build their team around doing so. They’re comfortable drafting the likes of Mathias Kiwanuka and Jason Pierre-Paul in the first round without a glaring need up front, knowing that their talents and the ravages of time will combine to create an opportunity. General manager Jerry Reese has been able to integrate rookies from his draft classes into each of his two Super Bowl winners, and since that 2007 season, only the Packers and Saints have won more games in the NFC than Tom Coughlin’s team.

There is one blind spot for the organization, though, that has repeatedly caused them to waste money. Why are they convinced that they need to devote significant resources to their ball carriers at running back? Over a stretch that dates back nearly 20 years, they’ve gotten little return on their investments at halfback. On Thursday night, they will stumble into the latest of their many changes at running back by virtue of an injury to Ahmad Bradshaw, a move that might end up sticking for a while.

This story starts in the early ’90s, when the post-Parcells Giants stumbled through Sunday mornings with an offense that looked hungover and lethargic. That unit was built around the 3.8 yards per carry of Rodney Hampton, the last first-round pick of the Parcells Era. Hampton’s Giants had a variety of dismal quarterbacks and had just one above-average season in terms of points scored.

Hampton was joined in the backfield by two other first-round picks, neither of whom lived up to expectations. In 1991, the Giants made the remarkably quaint move of drafting a fullback in the first round, taking Michigan back Jarrod Bunch with the 27th pick. Bunch was the next-to-last fullback in league history to be taken in the opening round of the draft, narrowly preceding William Floyd in 1994, and serves as the second half of the last tandem of running backs to be taken by the same team in the first round of consecutive drafts.

In 1995, the Giants decided to add to their rushing attack by spending the 17th overall pick on Michigan’s Tyrone Wheatley, a 235-pound bruiser who they hoped could split time with Hampton. Why they felt like they needed to spend their first-round pick on a platoon back is a mystery lost to the sands of the Hudson River. Wheatley never ran for more than 583 yards in a single season with the Giants, offered nothing as a receiver, and promptly had two decent seasons with the Raiders after he left, before retreating into a backup role.

The Giants took their next franchise back in 1997 … they just didn’t trust him until 2002. Tiki Barber was part of a multi-back rotation taking over for Hampton as a second-round pick out of Virginia during his rookie season, but he served as a scatback and kick returner for most of his first three seasons with the team. That year, Wheatley and Barber combined for 55 percent of the carries and averaged just 3.8 yards per pop. A sixth-round pick that the Giants had used at fullback, Charles Way, got 29 percent of the carries and averaged 4.6 yards per carry.

Dissatisfied with their options, the Giants cut Hampton and dipped into free agency to sign Gary Brown, who had been cast off by a 4-12 Chargers team. He surprised with a 1,063-yard season in 1998 before missing most of 1999 and retiring. That year, the Giants’ leading rusher was rookie second-round pick Joe Montgomery, who ran the ball 115 times and averaged a devastating 3.0 yards per carry. Only 13 backs have produced a worse figure on 100 carries or more in a season since.

Montgomery’s failure led the Giants to take another running back in the first round of the 2000 draft, their sixth first- or second-round pick at running back in 10 years. That back was Ron Dayne, and despite his collegiate success as Wisconsin, he hit the hole in the same sense that you hit the hay; it seemed warm and inviting to Dayne, and once he got there, he wanted to spend eight hours in it without moving. He averaged just 3.5 yards per carry and failed to run for more than 770 yards in a season with the Giants.

While the Giants teamed Barber with Dayne as an early version of Thunder and Lightning, they were mostly just wasting time with Dayne. In 2002, the team finally gave Barber the lion’s share of the workload, and he became the first back since Hampton to really capture the starting role and serve as a workhorse. Over the next five seasons, he averaged 2,055 yards from scrimmage with 10 touchdowns per year. Barber overcame fumble issues and concerns about his durability to become the lone example of a time when the Giants managed to simultaneously invest a lot in one running back and get a legitimate return on that spending.

Of course, the Giants famously won their first Super Bowl since 1990 in the season after Barber’s departure, a 2007 campaign that saw Big Blue’s offense score 18 more points than they had in the previous season. That year’s rushing attack was built around a group of nobodies at running back. Mammoth Brandon Jacobs, a fourth-round pick who had posted excellent per-carry numbers in two seasons as Barber’s understudy and goal-line back. Behind him was practice squad journeyman Derrick Ward and rookie seventh-rounder Bradshaw, who parlayed a long run against the Bills in Week 16 into steady work during the playoffs. In 2006, Barber ran 327 times for 1,662 yards, an average of 5.1 yards per pop. During the 2007 season, the combination of Jacobs, Ward, and Bradshaw accrued 350 carries and 1,801 rushing yards, also averaging 5.1 yards per pop. Barber’s cap hit in 2006 was just under $7.5 million. The three-headed hydra in 2007 came in right around $1.75 million, delivering 100 percent of the performance for 23.3 percent of the cost.

That went even further in 2008, when the Giants’ offensive line became known as the best unit in all of football. Jacobs and Ward each ran for more than 1,000 yards, and all three backs exceeded 5.0 yards per carry. It became an important test case for judging rushing attacks and valuing players. If three unheralded backs are all effective, and there’s one offensive line creating holes for those three players, doesn’t Occam’s razor hold that the offensive line deserves a huge chunk of the credit for each back’s success?

NFL teams didn’t think so, the Giants included. After that season, Ward cashed in as a free agent and signed with the Buccaneers, but he only ran for 409 yards in his lone season as a Tampa back before being released.

Jacobs got a four-year, $26-million deal to stay with the team after being franchised before the 2009 season, only to see his performance drastically decline almost immediately after signing the deal. He lost his starting job to Bradshaw in 2010, created a number of controversies on and off the field, and wasn’t re-signed by the team after his deal ended. Bradshaw earned himself a new contract before the 2011 campaign, one that was marked by injuries and middling play. Giants fans have fond memories of him desperately trying to not push the winning touchdown over the goal line at the end of Super Bowl XLVI, but he also nearly fumbled the game away in the NFC Championship Game and nearly cost the team seven points with another key fumble in his own territory during the Super Bowl.

And yes, despite the struggles that they had seen with guaranteeing running backs decent-sized contracts, Reese dipped back into the draft this year and selected running back David Wilson with the team’s first-round pick. A fumble in Week 1 has already consigned Wilson to the bench for the time being, a move which has launched unlikely starter and journeyman Andre Brown into the stating lineup for the time being.

Brown came into the league as a fourth-round pick from North Carolina State with a Speed Score of 110.2, the best figure in a relatively disappointing class of halfbacks. Brown’s mix of size, speed, and versatility would have made him a natural change of pace for the limited receiving skills of Jacobs and Bradshaw, but he suffered a torn Achilles during his first preseason and bounced around four other teams’ practice squads in 2010 before returning to the Giants in 2011. When Bradshaw left the game last week, the Giants didn’t turn to Wilson, preferring to give the ball to Brown.

Brown put a spark in the Giants offense, averaging 5.5 yards per carry on his 13 attempts. He even threw in a rushing touchdown. Afterward, Brown noted that he’d merely been waiting for an opportunity to show off what he could do. There’s no guarantee that he’ll be an adequate replacement for Bradshaw, of course, but there’s also no guarantee that he won’t outperform the more expensive back for a fraction of the cost. That seems to happen far more frequently with running backs than it does with replacement-level talent at virtually any other position besides kicker. It speaks to just how important offensive line play and offensive schemes are in determining how successful a running back and a running game are.

Of course, it could be worse for the Giants; they could be the Panthers. Carolina’s committed $50 million or so in guaranteed contracts to DeAngelo Williams and Jonathan Stewart, talented backs who struggle with staying healthy and often serve to complement one another in the backfield. Carolina features devastating rushing weapon Cam Newton at quarterback, and research has suggested that halfbacks on teams with running quarterbacks tend to produce more yards per carry than backs in traditional situations. Either way, committing $50 million to a backfield is insanity, a contract negotiation tactic that general manager Marty Hurney seems particularly fond of.

And it’s easy for Giants fans to point to the banners announcing their Super Bowl successes under Reese or Coughlin, but don’t pretend that every move the Giants made during that time frame was perfect. New York didn’t go 16-0 and win the Super Bowl every season from 2007 through 2011; they won two and three heartbreaking years in between. What if the Giants had saved the money on Jacobs and Bradshaw and used that cap space to acquire a veteran offensive tackle or an extra cornerback when they all had the injuries in their secondary? It’s entirely possible that we could be talking about the three- or four-time recent Super Bowl champions. Success should never preclude self-analysis and improvement, and as good as the Giants are at some aspects of player development and valuation, they’ve placed a value on veteran running backs that doesn’t remotely match the reality of how those players produce. Thursday night may provide the latest example of how a hungry late-round pick can be of more consequence than a first-rounder or a expensive veteran.