Gazprom, Zenit St. Petersburg, and the Intersection of Global Politics and World Football 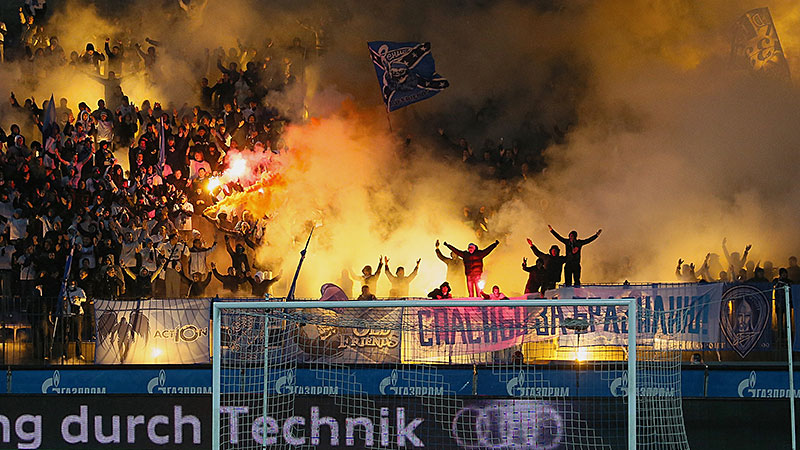 Zenit St. Petersburg will almost certainly bow out of the Champions League against Borussia Dortmund today. Zenit going out of the Champions League is an almost annual event. Seemingly every year, Zenit represent the Russian Premier League in European competition. They play some matches, remind everyone for a little while where the once-were and almost-stars like Hulk, Danny, Axel Witsel, Andrei Arshavin, and Domenico Criscito have wound up. We watch them play and ask, Zenit? Why are they all playing in St. Petersburg? The answer, of course, is money.

Sports fans most likely know Gazprom as an official partner of the Champions League. It’s pretty hard to miss its name plastered all over everything. The company purchased Zenit in 2005 and has not been shy about splashing its cash around ever since. The natural gas company spent more than 10 million euros on an individual player eight times. It dropped an eye-watering 55 million euros on Hulk and an almost equally insane 40 million euros on Witsel (all transfer fees as reported on transfermarkt.co.uk). With that kind of financial muscle, Zenit have become a mainstay in Europe. And while they have yet to progress past the round of 16 in the Champions League, they did become the first Russian team to win a European competition when they took the 2008 UEFA Cup. Their deep pockets have now attracted Andre Villas-Boas to take over as manager.

Gazprom’s sports influence isn’t confined to Zenit. It is a major sponsor of Schalke 04 as well as Red Star Belgrade and the official “Global Energy Partner” of Chelsea. Oh, and it is official partners with FIFA as well, with a deal beginning in 2015 and lasting through 2018, when Russia will host the World Cup.

Gazprom has its fingers in just about every football pie you can possibly imagine, and yet that is without a doubt the least important thing about the company.

Trying to break down exactly what Gazprom is, and the role it plays in world geopolitics is an incredibly complex conversation, one that exists entirely outside the realm of sports. This is kind of the point. Gazprom is an energy company, mostly owned by the Russian government. It supplies natural gas to much of Europe, and by some estimates accounts for roughly 30 percent of it. Most immediately important, negotiations over its gas deal with Ukraine was one of the precipitating events for the recent overthrow of the Ukrainian government, which was the precipitating event for the Russian annexation of Crimea. Nothing like boiling perhaps the biggest geopolitical crisis in years down to one sentence, but we must get back to the sports.

It’s downright unnerving that there is a direct line between Russia’s energy policy — which is a big and important deal when it comes to things like the entire world not blowing itself up — and the reunion of Hulk and Villas-Boas, a big deal when it comes to me having to find creative ways to watch the Russian Premier League. In 2011, when Schalke sold Manuel Neuer to Bayern Munich, Russian President Vladimir Putin personally attempted to stop the transfer. Maybe all this means is that Putin is a big fan of ball-playing goalkeepers, or maybe there’s something more complex going on. Either way, it’s certainly notable just how involved Putin can be in his sports interests.

European soccer has been inextricably intertwined with the world outside of European soccer for the better part of a century. Perhaps most notable are examples like Italian Prime Minister Silvio Berlusconi riding his ownership of AC Milan to political power in Italy or the roots of Barcelona–Real Madrid’s fierce rivalry dating back to the Spanish Civil War. Across Europe, various clubs have developed as politically left-leaning or right-leaning, organized around political parties. In a very real sense, football is part of the fabric of broader social issues.

When it comes to American sports, there’s never really any doubt as to why an owner wants to be involved with a team. It’s either money or it’s prestige. That’s the list.

That’s not to say the various leagues don’t have their fair share of scumbags and hucksters; it’s just that the motivations of said scumbags and hucksters remain easy to decipher. Oh, and they don’t have access to nuclear weapons. The worst thing an incompetent basketball owner can do is trade for Andrea Bargnani. That’s a far cry from starting World War III (despite what the Knicks blogosphere might have you believe).

It’s not hard to come up with reasons why it is in Russia’s best interest to have an internationally competitive soccer team. It’s also not hard to think of reasons it might want Gazprom’s name on football jerseys around the world. In sports, we call it marketing; in politics, we call it propaganda. However you frame it, you can see why Russia might want the world to think of Gazprom as the company that sponsors the Champions League or the rich Russian owners that bought Hulk rather than the company that threatened to shut off Ukraine’s heat during the winter (and is now proposing to develop oil and gas fields in the newly annexed Crimea).

That Gazprom’s motivations for being involved with sports need contemplation at all is different from what a typical American fan is used to. It’s another reminder that while sports might be the same the world over, the business of sports can be dramatically different. American sports can often seem detached from the world around it. That’s not always the case elsewhere. While Zenit are playing for their proverbial lives in Germany on Wednesday, their owners will be holding millions of actual lives in their hands less than 2,000 miles away.

Kentucky's NBA alumni are making a combined $73 million in salaries this season, which puts them narrowly ahead of UCLA's, Florida's and Duke's.

Q&A: Goran Dragic on Being Fearless, Playing His Game, and ‘Words With Friends’