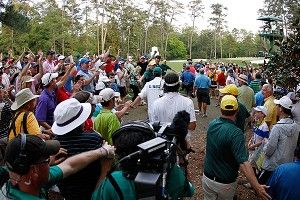 Overtime is an interesting phenomenon. There’s no way to go into a sporting event expecting it. If you think about it, two teams or individuals getting the exact same score, be it over 48 minutes, nine innings, or four days, is kind of crazy. Anyway, for the invested sports fan, this whole overtime thing usually becomes a point of great stress. Yes, if your team was down and fought back, then you’re ecstatic, because at the very least, you have the momentum going into extra time. But it’s still stressful. For someone who is simply a fan of sports and has no real investment in the competitors, teams, or event, however, there’s nothing better.

One of my earliest basketball memories is going to an Atlanta Hawks game at the Omni (RIP), watching the game go to overtime, and hearing a guy behind me and my mother stand up and scream, “FREE BASKETBALL.” That’s always stuck with me, because that’s exactly what it is. Extra sports weren’t included in the original package, and essentially, this additional time spent watching the game was on the house.

There were two opportunities to catch free sports on Sunday. Due to a weird cocktail of high theatrics and Carmelo Anthony, the New York Knicks rallied late to force overtime against the Chicago Bulls. And down at Augusta National, Louis Oosthuizen and Bubba Watson forced a playoff at the Masters.

In addition to getting free sports, the other great thing about having no real investment in the winner is that, for no real reason, you can root for one of the two competitors and suddenly care about nothing outside of their success. After Carmelo tied the game in regulation with a swag-ladened 3-pointer (yes, that’s what it’s called when you pull up two feet behind the 3-point line, shoot it, and then, instead of holding your follow-through, dropping your arms to look at what you’ve done, a la Junior Griffey mid-’90s home run swing), I knew I was rooting for the Knicks to win.

Even though I live in New York, and the city is infinitely more fun when New York teams win, I shouldn’t root for the Knicks. A surging Knicks team is not good for my highly volatile Hawks. We’re in fifth place in the East, and the Knicks are tied for seventh. A Knicks win puts New York closer to bumping Atlanta down, also known as having to play the Miami Heat. But Carmelo’s 3 was so good, I couldn’t help it. He made it and I screamed like my team had just won the pennant.

And then he did the SAME thing in overtime, which caused me to beat my chest while running around the living room, screaming. I didn’t even mean to, but it happened. The game was over, the Knicks had won, and my heart was racing. Even though I changed the channel about 10 seconds later and filed it in the “great sports viewing events” folder in my brain, I reminded myself that there’s just nothing better than free basketball.

I love Oosthuizen. Not for anything golf-related, but for everything not golf-related. I love the gap in his teeth. I love the fact he’s sponsored by UPS. The guy is the man. Once the realization that Tiger wasn’t going to win set in, I needed someone else to root for. Watching a guy hit a double eagle (ALBATROSS, BABY) made that decision pretty easy. But as the 16th hole approached Sunday, something happened as I watched Bubba Watson walk to the tee. While Oosthuizen’s face was pretty animated for the duration of the contest, Bubba was donning a Kobe-esque stone-face stare. I don’t think I’ve ever been as focused as he looked. It was a startling thing to see, especially coupled with the old-school visor, the all-white outfit, and the Southern boy swoop. I couldn’t take my eyes off Bubba.

As 17 turned into 18, which turned into sudden death, it became clear Bubba was my guy. I had never seen someone have so much home-court advantage at a golf tournament, and that was refreshing to watch. The University of Georgia faithful was out to root for their guy Bubba in the gallery, and by “root,” I mean scream “BUBBA!” the millisecond after his club touched the golf ball. As free golf began and they walked back to repeat the 18th hole, Southern pride was taking over my body. This is a pretty interesting thing to feel, seeing as that long-time practices of Augusta National are one of the many reasons I’ve long told people “I’m not from Georgia, I’m from Atlanta.” But, again, I couldn’t help it.

As the sudden-death playoff stretched into a second hole, and Bubba hit an atrocious tee shot, I was crushed. You’re a professional, Bubba, why hit the biggest shot of your life in a patch of pine straw? Why, Bubba, why? Now furious that Oosthuizen was about to win, I almost changed the channel. I didn’t want to have to witness Bubba lose the Masters. Luckily for me (and Bubba), he had one last trick of his sleeve. I was certain nothing could top Carmelo’s two clutch 3-pointers, but Bubba hooking a magic bullet second shot around a canopy of trees, and ending up on the green, did just that. With Carmelo, I beat my chest, stood up, and screamed. Post-Bubba, I almost fainted. Just unbelievable.

It soon became clear Bubba was going to win the Masters. After watching him sink the final putt and proceed to cry on every member of his rapper entourage-sized crew, I, again, smiled, filed it away, and changed the channel. Bubba had been my overtime guy, he pulled it out, and I thanked him for it. Yes, I had quickly moved on, but for that half hour, it became clear free golf was pretty unbeatable.

But then again, there’s free tennis. And that whole shootout thing in soccer. Oh, and the last scene in D2: The Mighty Ducks. Ugh, I can’t decide. Life is hard.