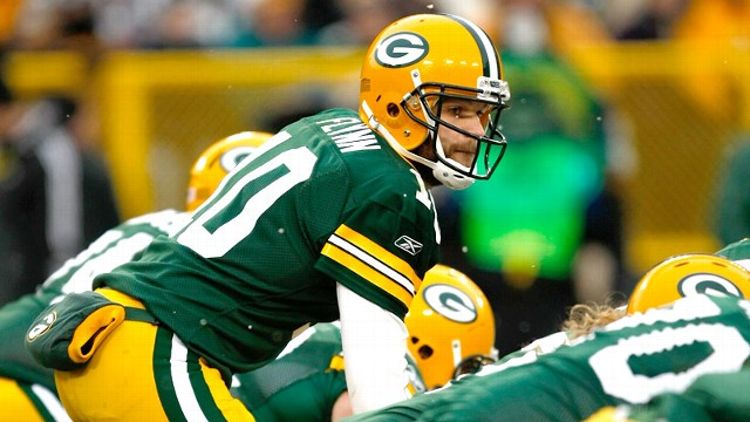 Disclaimer: This article is part of my series on free agency from the perspective of the agent, where I prepare Scott Boras-esque “books” that detail where each player stands in the marketplace and why he deserves as much of your team’s money as possible. Normally, my goal is to use statistics and historical context to present the most accurate depiction of football that we can, but in this series, all I want to do is convince you to spend money on the player in question. As a result, I may include information or suggest comparisons that I don’t necessarily agree with, just as an agent might try to play up his clients’ strengths. Keep that in mind when you’re reading. (For more on this, check out the Monday piece on Mike Wallace that started this series.)

It’s that same reason — the presence of another franchise quarterback on the roster — and that same reason alone that has allowed Matt Flynn to hit the free agent market. When Aaron Rodgers has been unavailable and Flynn’s had a chance to work with the first team in practice, the former national champion at LSU has been consistently brilliant. For whatever Flynn lacks in experience, his work during stints under center with the Packers have shown that he possesses the rare ability required to lead a team to the Super Bowl. His record shows as much.

Flynn has never been held back because he wasn’t good enough. In college, he matriculated behind a first overall pick (JaMarcus Russell) before leading his team to a national title with his first opportunity. At the professional level, he’s learned from the league’s best quarterback in a system that’s consistently produced excellent starters. Veteran players who are capable of serving as Super Bowl leaders don’t often hit the free agent market, let alone at 26. Flynn is the rare exception, and whichever team chooses to focus on his considerable skills is going to end up acquiring a franchise quarterback for free.

Flynn vs. the Lions

When Flynn led the Packers to a 45-41 win over the Lions in Week 17, his spectacular performance was a signifier that he possesses elite ability. His passing line that day — 31-of-44 for an incredible 480 yards with six touchdowns and just one interception — produced a better passer rating than any other quarterback who started a game against the Lions all season, including Aaron Rodgers and Drew Brees. More impressively, he did all this without having top Packers wideout Greg Jennings or tackle Bryan Bulaga available.

To put Flynn’s performance in context and establish the company with which this sort of game resides, let’s place a definition on what a truly great quarterback performance is. Consider the following criteria:

Of course, there are a million ways to define what a “great game” by a quarterback is, but it’s impossible to deny that a quarterback who puts up that sort of performance did anything but play fantastic football. Flynn exceeds the criteria by a wide margin in most categories, having completed over 70 percent of his passes while throwing for nearly 500 yards and averaging just under 11 yards per attempt.

Since 1990, there has been just one performance of that caliber per season: 22 such games in 22 seasons. That’s useful trivia, but what’s more important is this fact about the quarterbacks who produced those 22 games: Every single one of them had either already made the Pro Bowl or would do so in the future. Twenty-two for 22. The list of players who produced those sorts of games is exceedingly impressive company:

That’s the sort of quarterback every team without a franchise quarterback wants to acquire. And remember that these players have only had, at most, three magical games like this across their entire career. Flynn did this in his second career start. Flynn didn’t need this sort of monster game to prove that he could play at the professional level, but now that he has a performance like this under his belt, it’s clear that he has elite skills waiting to be unleashed.

It’s true that, for a 26-year-old in the pros, Flynn is a relatively inexperienced quarterback. That’s indisputable. On the other hand, Flynn’s spent the last eight years working underneath some of the best coaches in the country at LSU and Green Bay, an everyday advantage that other quarterbacks haven’t been able to enjoy, even as they’ve been in the starting lineup. In addition, Flynn has a performance record that’s superior to every other quarterback of his ilk since the AFL-NFL merger, including those quarterbacks who have gone on to successful professional careers after starting their careers in a similar situation.

After completing the 2011 season, Flynn had thrown 132 pass attempts at the NFL level. Since the merger in 1970, 36 other quarterbacks had finished their age-26 season with between 100 and 150 career pass attempts. When we compare Flynn to those quarterbacks through their respective careers at 26, his performance record is stellar:

Several of those 36 players went on to have successful NFL careers after turning 27, notably Steve Bono, Gary Danielson, and David Garrard, the three quarterbacks in the group who each went on to throw more than 1,500 additional NFL passes during their careers. Flynn’s performance through 26 is far superior to their totals.

In addition, the West Coast Offense that the Packers run has a history of producing viable starters from players who were backing up already-established starters on successful franchises. The most notable example of such a player is Matt Hasselbeck, who spent three years as a little-known late-round pick on the Packers before becoming a three-time Pro Bowl quarterback for the Seahawks. Compared to Hasselbeck, Flynn is both more experienced and successful:

Every player benefits from getting the opportunity to practice with the first team while knowing all week that he’ll be on the field come game day. It’s just human nature. That would naturally go even further for a young player like Flynn, who has had to battle to get onto the field behind Aaron Rodgers for his professional career. As you might suspect, Flynn has been a far better player during his two professional starts, when he’s gotten the first-team reps in practice, than he has been when coming off the bench without warning. In fact, the difference between the two is jarring:

Aaron Rodgers, over the past two years, has completed 67.0 percent of his passes and averaged 8.8 yards per attempt; Flynn’s matched and actually slightly exceeded those figures in his two starts over that time frame. When Flynn goes to his next team, he’s going to have an opportunity to spend an entire training camp and a full season practicing with the first team while retaining the confidence that comes with being a starting quarterback in this league. When he’s had that available to him as a starter, he’s produced at a level similar to the league MVP. What more can you ask for?

There are only a few ways to acquire a franchise quarterback, and most of them aren’t much fun. You can have an awful season and, if you’re lucky, have one fall into your lap with one of the first few picks in the draft. You can wait for one to get old and then trade away multiple draft picks hoping that the guy some other team decided wasn’t worth holding on to is good enough to be yours. Maybe you get lucky with a late-round pick and stumble onto one. Those are all pretty dire, unenviable situations to be in.

The only other way to end up with one, though, is to be the lucky team that benefits when one organization somehow happens to have two franchise quarterbacks on their roster at one time and has one of them hit free agency. The Saints were lucky enough to be the team who benefited when Drew Brees hit the marketplace in 2006. Somebody’s going to be that lucky this time around. Without having to give up a single draft pick or endure a losing season, they’re going to be able to head into free agency and come out of it with a franchise quarterback. Matt Flynn is the only player available on the market with a championship pedigree and an elite performance record. He’s your lucky break, the franchise quarterback who gives you a ticket out of that endless search for “the guy” at quarterback. And he’s going to be that lucky break without touching a single asset on your roster.