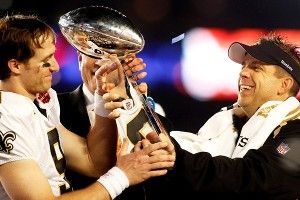 In football, it’s usually true that everything you see has happened before and will happen again. Sure, you might only get an Immaculate Reception once every 200 years or so, but when it comes to team-building and paths to success, the league’s 32 organizations roughly follow a few similar story lines and situations. In thinking about the four teams left in this year’s playoffs, certain Super Bowl winners from the recent past come to mind. They’re not perfect matches, mind you, but they’re teams that have either been constructed in a similar way and/or have undergone the same trials and tribulations to get where they are today. By understanding how they finished their trip to and through the Super Bowl, we can get an idea of what 2012’s playoff teams need to do to win this year’s Lombardi Trophy.

That starts in Atlanta, where the comparisons between quarterbacks battling seemingly endless criticism continues …

That Colts team stands out as the most obvious comparison for me, thanks to the story lines surrounding Peyton Manning and Matt Ryan at these respective points of their careers. Those Colts didn’t finish the regular season hot, losing three of their last five, while their defense slumped to 23rd in points allowed. Manning had his first playoff win under his belt, but he was 3-6 in the playoffs at that point, including two double-digit playoff losses to the Patriots. During the regular season, Manning had come up with his second consecutive regular-season victory over New England, 27-20, in a game in which Tom Brady threw four interceptions. That victory ended up being enough to secure home-field advantage for the Colts in the AFC Championship Game against those same Patriots. The Colts got there after beating the no. 2 seed Ravens in Baltimore in a dismal 15-6 affair in which neither team scored a touchdown and the Colts recovered all five fumbles.

In that fateful game, after trailing 21-3 in the second quarter, Manning led a comeback to tie the game at 28-all in the fourth, and with the Colts down 34-31 with 2:17 left, Manning delivered with a 80-yard touchdown drive — one in which he was 3-for-4 for 57 yards with a roughing-the-passer penalty thrown in — to put the Colts ahead and propel them into the Super Bowl.

Ryan doesn’t have a Patriots-esque arch-nemesis to overcome in the NFC Championship Game, but there are some similarities that come into play. The Falcons were able to secure home-field advantage for this game, a fact that might help them mount a comeback if the 49ers get up early, if only because the game will be played indoors on turf. Of course, considering how fast the 49ers looked last week, it might also help the challengers in producing explosive plays, too. The Falcons have a pair of receivers to rival the combination of Marvin Harrison and Reggie Wayne, as well as a tight end (Tony Gonzalez) who seems to always come up with big plays when his team needs them. Manning’s two big plays on those fourth-quarter drives were on long catch-and-runs from Dallas Clark and Bryan Fletcher, Indy’s two receiving tight ends at the time. The 49ers are infinitely deeper at linebacker than those Patriots were, but their safeties can be manipulated and exploited for big plays. It’ll be part of Atlanta’s game plan to do just that.

Manning overcame his playoff Patriots problem and promptly won a Super Bowl before anyone could accuse him of needing to do so to secure his legacy, beating the Bears two weeks later. Ryan can get the jump on people saying that he needs to do the same thing in the year of his first playoff victory by upsetting the 49ers at home and winning the Super Bowl himself this year.

The Packers were a team that figured it all out in the playoffs after years of showing signs they were capable of doing anything they wanted. They finished as a 10-6 team, but they had the Pythagorean expectation of a 12-4 team, a level of performance they displayed during a dominant postseason run. The playoffs weren’t quite a hornet’s nest for that Packers team, but they had begun to hear whispers about their inability to win the big game after losing to the Giants at home in the 2007 NFC Championship Game (with Brett Favre at quarterback) and dropping an exhilarating 51-45 overtime thriller to the Cardinals in 2009.

Green Bay made a notable switch at the end of the regular season that helped them in the playoffs; after struggling to find a suitable running back for most of the season, they finally settled on untested rookie James Starks, who ran for more yards in the first playoff game than he did all season.

The 49ers obviously brought in Colin Kaepernick earlier than the Packers did Starks, but it’s the same sort of story: Kaepernick was the last piece the 49ers needed to be dominant in all facets of the game. While he doesn’t lack for accuracy in the efficient passing attack that the 49ers used with Alex Smith under center, Kaepernick gives the 49ers a big-play weapon — both with his arm and his feet — that they previously missed. Now, San Francisco can play any style of game with any team in the league and be a very dangerous football team. That’s terrifying.

Coincidentally, the 49ers-Saints game from last year’s divisional round shares a comfortable resemblance to the Falcons-Seahawks game from last week. The home team looks shaky at times but gets some big plays from its defense and steady work from its offense to build a big lead early — the Niners led, 17-0, in the second quarter — but surrenders the lead when the other team starts making big plays on offense. Lead changes abound in the final couple of minutes, but it takes a stunning last-second play by a tight end to win the game.

The Giants were no team of destiny until they turned out to be a team of destiny all along. For all the talk now that they were a team that knew they were something great in Week 17, the Giants were really a team that limped into the playoffs on the heels of a terrible stretch of play. Eli Manning had a seven-game stretch in the second half that saw him complete 52.4 percent of his passes, and the Giants’ wins came over teams quarterbacked by Cleo Lemon, Rex Grossman, Trent Edwards, and Donovan McNabb. (Hey, some things never change.) As he entered the playoffs, Manning was closer to getting run out of town than he was to winning a Super Bowl. New York’s defense seemed too old; they’d gotten an indifferent year from Michael Strahan, who had talked about retiring in training camp, and their best cornerback (Sam Madison) was fading fast.

So, of course, they won the Super Bowl. Manning turned his game around and became a franchise quarterback at the perfect moment. A multi-back attack kept teams off-balance as the Giants relied on their excellent rookie draft class to make contributions up and down the roster. Despite their injuries, the defense suddenly came to life, as veterans Strahan and Antonio Pierce made huge plays alongside those left for dead, like cornerback Corey Webster, a healthy scratch at times during the season. Despite having to do their work on the road, the Giants survived their way through the playoffs and knocked off a heavy favorite in the Super Bowl, the same heavy favorite this year’s Ravens are going to have to beat in the AFC Championship Game.

You can see a lot of the same trademarks here. The franchise quarterback who has struggled to be the real deal. The fill-ins and backups who’ve had to learn the ropes at new positions quicker than they expected, especially at cornerback, where special-teams dynamo Corey Graham has gone from being an afterthought to the team’s top corner. The team’s defensive anchor isn’t 100 percent, but just as Strahan won a ring in his final season, Ray Lewis is trying to do the same in his. To get to the Super Bowl, though, the Ravens will have to outlast a legend in the AFC Championship Game, just as the Giants had to get past Brett Favre in their conference championship tilt.

No, this year’s Patriots team doesn’t resemble their championship winners from the past. For one, the personnel is virtually all different. The only player left on the Patriots from that 2001 championship team is Tom Brady, and just two others — Deion Branch and Vince Wilfork — are still around from the 2004 Super Bowl–winning side. Their style of play has changed, the roster construction has changed, most of the coaches have changed … it’s just not the same team, for better or worse.

Instead, these Patriots look and act more like that Saints team than anybody else. They’re driven by a superstar quarterback, obviously, but there’s more to it than that. They’re an aggressive team, one that goes for it on fourth down when it wants to, one comfortable changing the tempo at any point of the game to fit its liking, one that toys with teams. The Patriots run the ball very effectively, but just as the Saints did, their success comes from the opposition’s fear of the passing game. The Patriots pass to set up the run. Their personnel at receiver is eerily similar, as both teams are built around a combination of superb underneath options and freakish athletes who can line up anywhere on the field and run past — or through — whoever is covering them. Aaron Hernandez is their Marques Colston. Brandon Lloyd is their Robert Meachem. Wes Welker is their Lance Moore. They have backs who can catch the ball out of the backfield and an offensive line that does a great job of shifting from pass protection to mauling and back.

And like the Saints, the Patriots will need their defense to stay above-average long enough for the offense to score. That team had one elite cornerback, Jabari Greer, and a bunch of ballhawks at the other positions. The Patriots have a very good cornerback in Aqib Talib, and the rest of their secondary can intercept just about anything that gets put in the air, even if they’re going to give up plenty of yards in between those interceptions.

The Saints survived a sloppy NFC Championship Game against the Vikings to make the Super Bowl, where they famously upset the Colts. In that game against Minnesota, Sean Payton made a hugely gutsy call that’s been entirely forgotten; in overtime, with his team driving for the winning score, he chose to go for it on fourth-and-1 from the Minnesota 43-yard line, as opposed to doing what most teams would do: punt. He was right to go for it, and while Pierre Thomas nearly fumbled the ball away as he was hit by Chad Greenway, he got the first down. Four plays later, New Orleans kicked the game-winning field goal. When it comes down to a big decision, the Patriots can be confident that they, too, have a gutsy decision-maker who’ll do the best thing for his team, even if it won’t win him a press conference. If you saw Thank You For Not Coaching this week, you know how gutsiness alone can be the difference between winning and losing a close playoff game.

For No Reason Whatsoever, Here's a Video of the 1988 Arizona Wildcats Rapping