Fourth-and-Short: It’s Only One Game, Houston 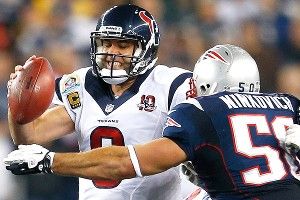 Patriots-Texans looked like Monday Night Football‘s most mouthwatering tilt for about 19 minutes of game time last night. By the time New England finished its third drive, the Pats had a 21-0 lead that the Texans never came close to challenging the rest of the way. Houston fans could argue that they were unlucky — who knows what happens if the Texans recover a Stevan Ridley fumble inside their own 5-yard line and Matt Schaub avoids a killer interception in the end zone on the ensuing series — but on the whole, they were outplayed by the Patriots and were clearly the second-best team on the field. (Also, the Texans had recovered 66.7 percent of fumbles in their games this year, the league’s second-best rate, so they’ve been lucky there.)

By the time that Ryan Mallett was throwing interceptions and Mike Tirico was rooting for the over to come in, it was safe to say that we had learned a fair amount about how these two teams might interact if they meet again in the AFC playoffs. We learned that the Texans aren’t quite the same offensively if they can’t force teams to honor their run-action on play fakes, but that they can still probably throw the ball on anybody by creating mismatches with Owen Daniels on drag routes. We learned that Tom Brady is still comfortable throwing to anybody on any down, even if it’s Donte’ Stallworth, and that he’s still going to get inappropriately excited about running for a first down up three scores at the end of the third quarter. But do we know, definitively, that the Texans aren’t ready to compete at the highest level?

The topic that came up after the game was that the Texans might not be ready for prime time, both figuratively and literally. That manifests itself in a number of ways, each of which we can analyze to see if there’s any truth.

For one, Matt Schaub’s numbers in night games are awful. After you add his disappointing performance against the Patriots to the mix, Schaub’s day-night splits are stark:

You generally don’t want your franchise quarterback turning into Derek Anderson once the sun goes down when the Super Bowl is going to be a night game. Ten games isn’t an enormous sample, but 300 pass attempts isn’t exactly a sample you can write off as a bad day, either. Is there some further insight that helps explain why Schaub’s been so bad at night?

Well, there seems to be one obvious answer: Night games take place in prime time, which usually means superior opposition and tougher defenses. That’s a testable hypothesis! Schaub has eight starts as the Texans quarterback underneath the prime-time lights, which account for 294 of the 301 pass attempts referenced in the table above. I went back and noted how each of those eight opponents ranked in terms of their pass defense DVOA, and I found that the concerns about his strength of schedule in night games are marginal. Schaub has faced one top-ranked pass defense (this year’s Bears), four that were ranked between sixth and ninth, and three that ranked between 22nd and 26th. The average rank of the eight teams in pass defense DVOA was 13th; that’s above-average, but not so much that it completely accounts for the huge dip in his performance versus day games. It could be nothing, but it’s at least worth mentioning.

What about the broader Texans team? Was the dramatic loss to the Patriots on the national stage a sure sign that they won’t be able to hold their own in the playoffs? For this one, Texans fans, I have better news: While the loss to the Patriots suggests that the Texans are perhaps not quite as good as their record indicates, losing to a playoff team by a significant margin doesn’t preclude a team from competing come playoff time.

I went through the past few years and found a number of teams who lost by 21 points or more to a fellow playoff team during the regular season before eventually enjoying postseason success. One team stands out there. In 2011, the New York Giants were blown out by the Saints on Monday Night Football, 49-24. You may remember them winning the Super Bowl. In 2007, those same Giants were handed a whupping on Sunday afternoon by the Packers, 35-13, in a Week 2 game that saw Big Blue booed off (and on) the field by their fans. Not only did that Giants team win the Super Bowl, but they went through the Packers in the NFC Championship Game to do so. The 2008 Cardinals didn’t win the Super Bowl, but they responded to a 48-20 manhandling by the Eagles on Thanksgiving night with a 32-25 victory over Philly in the NFC Championship Game. Even the Patriots aren’t immune to this. In 2010, they beat the New York Jets, 45-3, at home in Week 13, only to lose to Gang Green, 28-21, on the same field in the divisional playoffs. Obviously, you’d rather see your team of choice beat a fellow playoff team during the regular season, but losing handily to another contender is hardly a death knell.

I never thought I’d have to spend time over the final four weeks of the year praising Norv Turner, but after Sunday’s 34-24 win by the Chargers in Pittsburgh over the contending Steelers, it’s only fair to give Turner some credit. The final score barely reflects what an impressive performance this was by the Chargers; they went up 27-3 in the third quarter on the road and allowed some garbage-time points to make the final score look closer than it actually was. Nobody would’ve been surprised to see the 4-8 Chargers show up flat and disinterested with nothing to play for, so some of the plaudits for getting them to play hard must go to Turner and his coaching staff.

Even more impressively, the Chargers managed to score 27 points on a perennially excellent defense, one with Troy Polamalu back in the lineup for the second week in a row. (The San Diego defense recovered a fumble for the other seven points.) That would be exceptional if the Chargers were fully healthy themselves, but San Diego limped into Sunday with what must be the worst set of offensive tackles in recent memory protecting Philip Rivers.

On the right side, the Chargers suited up utility lineman Reggie Wells, who was a regular starter for the Cardinals at guard … in 2009. Since then, he has started one game over four years with six different teams, but the Chargers signed him last Wednesday and gave him the start at right tackle four days later. Protecting Philip Rivers’s blind side at left tackle? That job fell to practice-squad journeyman Kevin Haslam, who made his first career start in just his second week on the active roster for San Diego. Like Wells, he’s also nominally a guard, but the Chargers were left without options on the line because of injuries.

Amazingly, the Chargers were able to make hay and keep Rivers upright, despite having to use the inexperienced tackles. The Steelers were without star pass-rusher LaMarr Woodley, but James Harrison & Co. were able to sack Rivers only once (for zero yards) in 42 dropbacks, which is stunning. Rivers had a middling day, going 21-of-41 for 200 yards, but he did have enough time to throw three touchdown passes and was knocked down on only three other occasions. That’s a good day for the league’s best offensive line, let alone its worst. For whatever criticisms the Turner era in San Diego will endure over these final few weeks, the embattled Chargers coach got a pair of journeymen linemen ready and kept his quarterback upright in a game in which nobody would’ve batted an eye if neither of those things had happened. It resulted in a win that just might keep the Steelers out of the AFC playoffs.