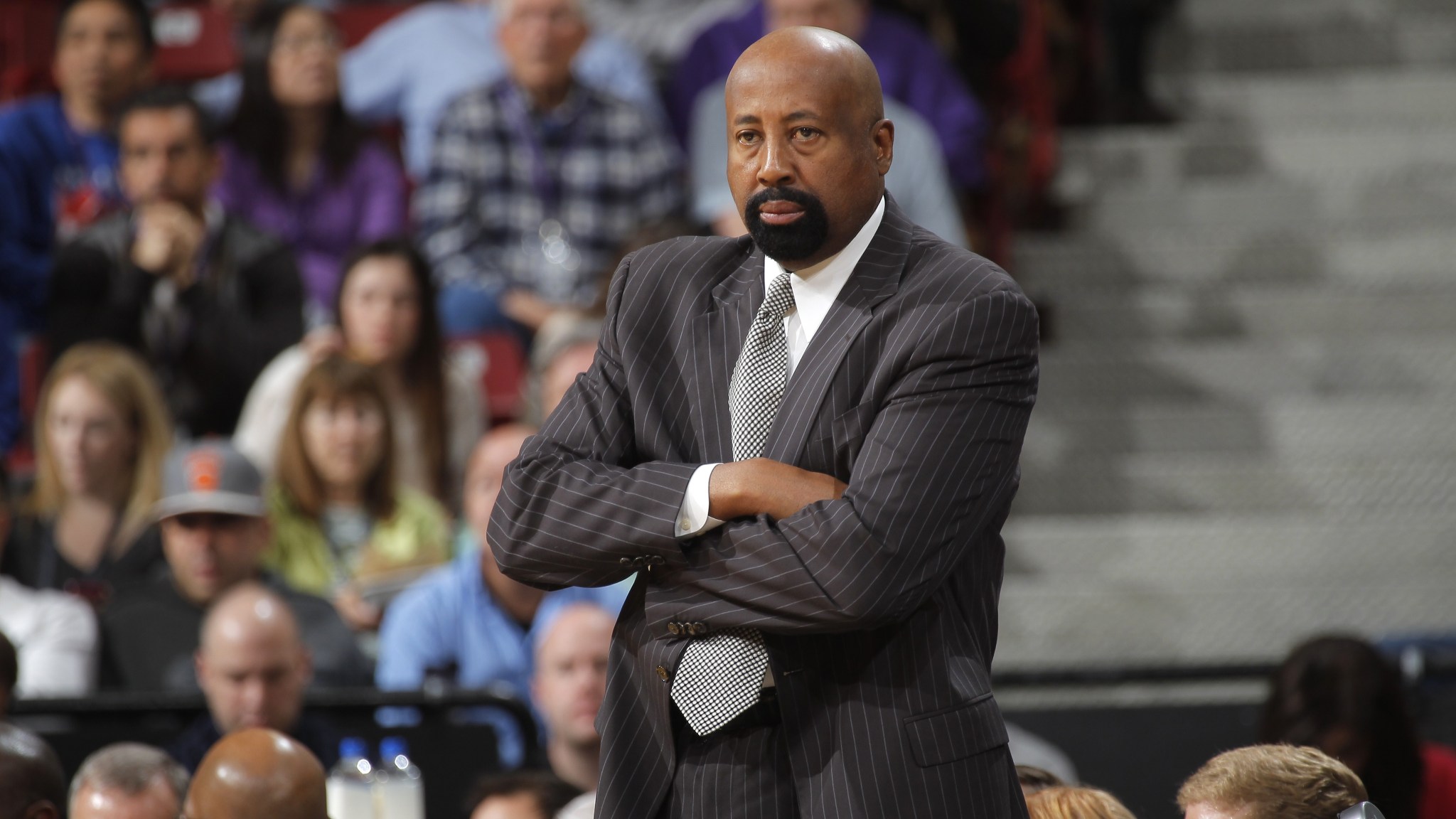 Mike Woodson had no chance of returning as Knicks coach once James Dolan shelled out that sweet, sweet Cablevision money for Phil Jackson. Woodson has a reputation as a defense-first guy, but with the exception of the mini-season he coached after Mike D’Antoni’s semi-firing, the Knicks were somewhere between below average and unwatchable on defense under Woodson.

And in a bit of Knicks history everyone seems to forget, D’Antoni already had those 2011-12 Knicks working as a borderline top-10 defense before New York let him walk.

The Knicks ranked 24th in points allowed per possession this season. Every team below them was either tanking on purpose (Utah, Philadelphia); tanking by accident (the Lakers and Bucks); incompetent enough defensively that they tanked the end of the season to make sure they kept their draft pick (Detroit); or decimated by injuries (New Orleans). The Knicks were basically the worst defensive team among NBA teams that were trying to win NBA basketball games.

The front office did not bless Woodson with a good defensive roster. Rick Carlisle is a genius coach with a great staff, and yet the Mavs finished only two spots ahead of New York in the overall defensive efficiency rankings. But the Knicks had two advantages over Dallas in this theoretical exercise: a former Defensive Player of the Year in Tyson Chandler, and 52 games against the sad-sack Eastern Conference. The sheer awfulness of the East was the only thing keeping the Knicks alive in the playoff race. They rediscovered some of their 3-happy, low-turnover offense from last season against a soft March/April schedule, and the injury-riddled Hawks propped open the door like a sleeping drunk.

The Knicks just weren’t good enough to seize their chances. There is only so much you can do on defense with Amar’e Stoudemire, Carmelo Anthony, J.R. Smith, Raymond Felton, Tim Hardaway Jr., and Andrea Bargnani. Woodson’s critics howled for more of Pablo Prigioni, and though the Knicks played off-the-charts ball with Prigioni on the court last season, those numbers did not carry over into 2013-14. Prigioni is a limited player, the kind who can thrive in 18 minutes but get exposed in 35. It should be no surprise that they imploded defensively in fatal late-season losses against Cleveland and the Lakers, the latter of which featured perhaps the lowest point of the Woodson era not involving a fire extinguisher or Bargnani’s headless defense — the Lakers’ 51-point third quarter.

Woodson’s idiosyncratic scheming didn’t work, and the failures weren’t just about the endless on- and off-ball switching the Knicks used as a crutch. Switching isn’t bad on its own, and can be an effective salve for a team lacking in skilled defensive personnel. But the Knicks lazily switched when there was no reason to do so, not even a real screen, and they suffered Keystone Kops–level communication breakdowns in every quarter of every game. Two Knicks would chase one guy on a botched switch, leaving openings across the court.

Teams also tore New York apart on the pick-and-roll. The Knicks ranked dead last in points allowed per possession on plays finished by both pick-and-roll ball handlers and screen setters, per Synergy Sports. It would be hard to pull off that double indignity without trying. Even more damning: This was all a repeat of 2012-13, when New York ranked 19th in points allowed per possession and couldn’t contain the simplest high pick-and-rolls.

Opposing ball handlers got to the middle of the floor whenever they wanted, something Woodson told me in preseason was not a serious problem. Woodson employed an unusual scheme in which the big man defending the screener, typically Chandler, would stick very close to home instead of sliding over to contain the ball handler. Woodson wanted that containment to come from other players, even if it required uncomfortable rotations. Sometimes those rotations never came, and ball handlers waltzed to the rim around Chandler’s non-help:

Sometimes New York’s other perimeter players had to abandon their marks in order to stop penetration, including via Woodson’s patented “jump switch,” in which a defender guarding a corner shooter darts over to stop a driving ball handler — with the hope the ball handler’s defender reads the play and scurries over to the corner:

Woodson is the only coach who uses the jump switch, probably because the rest of the league has figured out the value of the corner 3. The Knicks would never have been a good defensive team, but they might have been able to reach league-average status had Woodson implemented a more conservative style. Chandler wasn’t always healthy enough to move like Joakim Noah, but Woodson’s use of him was puzzling.

It wasn’t all bad for Woody in New York. He made the correct decision in 2012-13 to slot Carmelo Anthony at power forward, spread the floor with shooting, and whip the ball around for a record number of 3-point attempts. Those Knicks were an elite offense, and Woodson smartly turned Anthony’s isolation tendencies into a vehicle for unselfish play.

It’s clear now that style was an accident Woodson discovered amid Stoudemire’s endless health issues. Woodson wanted to go big, even if it meant playing Bargnani heavy minutes after the Knicks foolishly dealt three draft picks for him. Bargnani was a good theoretical fit if you ignored years of evidence that he was a subpar 3-point shooter and imagined him as a lethal stretch big man who could space the floor for Melo’s post-ups.

But Bargnani shot just 28 percent from long range, almost exactly what he has averaged over the last three seasons combined, and he was predictably disastrous on defense and on the glass. But somehow, even in his last week on the job, Woodson was lamenting Bargnani’s midseason injury and wondering what might have been.

Again: This wasn’t all on Woodson. The Knicks have a roster full of bad defenders. J.R. Smith was a mess until it was too late. Iman Shumpert has never been able to find a happy medium for extended stretches. The team’s internal culture eroded in meaningful ways without Jason Kidd, Rasheed Wallace, and Kurt Thomas around to police the asylum.

It was disturbing to watch New York flop defensively the same way it had flopped in 2012-13, and fail to make any real adjustments. Woodson brings some good qualities as a coach, but it was time for him to go.

And so now we wait to see what is next, for both the coaching staff and Anthony, who will decline his player option for next season and hit free agency. Steve Kerr is the favorite to succeed Woody; he declined comment today when I reached out to him. The signing last week of Lamar Odom signals Jackson’s interest in installing the triangle offense, and Kerr would lean that way if he gets the job.

Anthony’s free agency symbolizes the plight of these Knicks. They have refused to even consider trading him over the last year, and now he can leave without compensation. They are out two future first-round picks, and though both Shumpert and Hardaway Jr. hold promise, the Knicks don’t exactly have the chips of a killer rebuilding situation. They won’t have any cap room until after next season, and a new max contract for Melo would pay him $24.5 million in 2015-16 — soaking up a giant portion of New York’s free agency appeal.

Ponying up that kind of cash for Melo, at nearly 30, would jeopardize and perhaps destroy New York’s dream of signing two max-level free agents to play beside him in 2016 and beyond. The Knicks got some good news over the weekend when Larry Coon reported that the league now estimates the 2015-16 cap could rise north of $66 million, a projection that might jump again in the next six months. Even so, the Knicks’ 2015-16 cap sheet could also include about $11 million combined for Smith and Felton, Shumpert’s cap hold, the cost of their 2015 first-round pick (they actually have one!), charges for empty roster spots, and salaries of any free agents they sign to multiyear deals this summer.

That is the cost of a Melo mega-max. The Knicks have painted themselves into a corner in which there is no other attractive alternative, save for voluntarily being horrible next season. They could sign-and-trade Anthony over the summer, or extend-and-trade him, and the league’s increased cap estimate for next season should give Melo suitors in such transactions a tad more breathing room. (Note: The new estimate for next season’s cap, about $63 million, is only about $1 million higher than the league’s most recent prior projections.) There would be a market for him, and the Knicks could nab players who could at least allow Dolan to put together an entertaining product next season ahead of the Knicks’ first real shot at cap room since the summer of 2010.

What then? Who’s coming here to play with Melo trade fodder and little else? The Knicks will always be a major threat in free agency, but the Stoudemire albatross is a reminder that missing out on the best two or three free agents can lure a franchise into a bad overpay with long-term consequences.

Anthony is a very valuable player, and as I wrote here, he could fit well in the triangle. It would be a win for New York to coax even a small discount from him this summer — the price of Melo’s long-term security as he approaches his decline.

Regardless: The Knicks have a ton of work ahead of them. They are still at the beginning of the Jackson-era prologue. Woodson’s dismissal was the inevitable first step, and a good one. But what comes next is more important.

We’d be remiss to skip over Adelman’s retirement in Minnesota today. This was about as predictable as the Woodson firing in New York. Adelman has had one foot out of the coaching life for years, due in part to his wife’s prolonged illness, and he seemed distant and cranky overseeing a disappointing Minnesota team this season.

I addressed much of that disappointment at length here — the state of the Wolves, the future of Kevin Love, and Adelman’s role in both. He will stay on as an adviser, the team announced today, and he can be a valuable asset in that regard. He is a massively important figure in league history, perhaps the most underrated coach ever. He never won a ring as the head guy, and both his Portland and Sacramento teams flailed around a bit in pressurized moments. But his Blazers made two Finals, and shady officiating and some plain old bad luck likely robbed the 2002 Kings of a title.

Injuries derailed his best Houston teams, which were among the league’s elite defensive clubs during half of Adelman’s tenure there. We will rightly remember Adelman for his offense, but he was a very smart defensive coach. He was early in understanding the value of forcing midrange jumpers, and he designed low-risk, low-foul defenses that produced heaps of  misses. Those defenses worked better with Yao Ming backing them than they did with Kevin Love and Nikola Pekovic, but Adelman’s staff produced above-average defense from limited Minnesota teams.

Every team uses elements of Adelman’s corner offense, which involves high-post passing, cuts all over the floor, and some Princeton-style elements. He’s a solid all-around coach, one worthy of Hall of Fame consideration.