Duke-UNC: Q&A With the Director of the ‘Blue Blood Rivalry’ Documentary 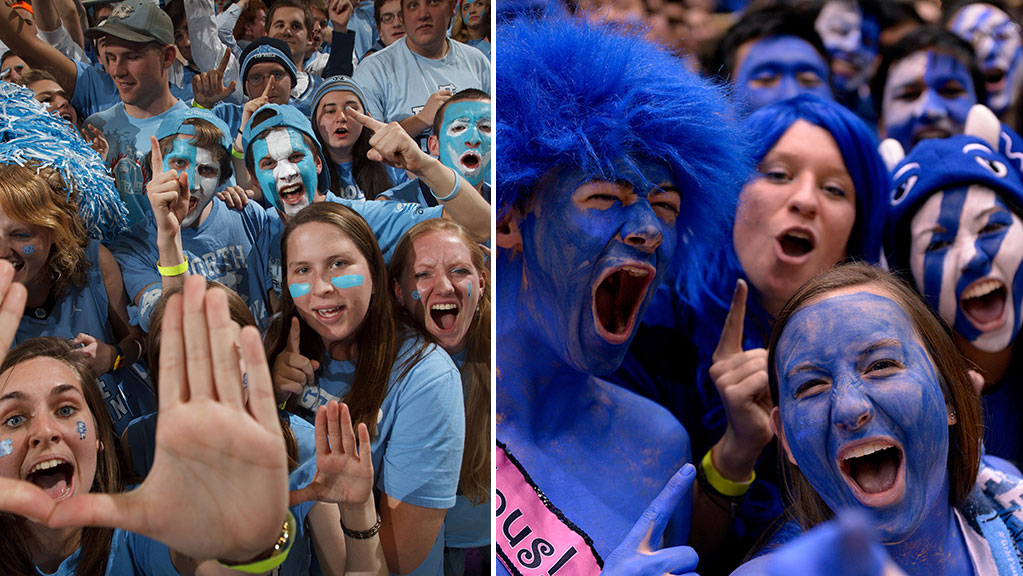 College basketball rivalry week began Monday, and to prepare ourselves for tonight’s Duke-UNC game, we watched Duke-Carolina: The Blue Blood Rivalry, a 95-minute documentary released last November. The film is based on Art Chansky’s books of the same name and features clips of past games, interviews with former Tar Heel and Blue Devil players, and visits to Chapel Hill and Durham on the day of the North Carolina home game two years ago. We talked to Jason Rem, the executive producer, writer, and director of the documentary, about his inspiration for making the film and his thoughts on the Tobacco Road rivalry:

First off, how did you become involved in the project?

I got a call from a good friend, Hassan Pinto, and he had gotten the rights to the book Duke-Carolina: Blue Blood and wanted to do a little video shoot. I said to Hassan, “You have all the rights to the book, you know people, why don’t we make a documentary about this?” Hassan said, “I would love to make a documentary. I haven’t made one, but let’s do it.” Hassan and I are both entrepreneurs, so we went for it. That was a couple of years back, but that’s kind of how the whole thing started.

So were you familiar with the rivalry beforehand?

Click here for all of our interviews with fascinating people from the worlds of sports and pop culture.
I had always heard about the seven miles between the two and the rivalry, but I never really understood it. They say it’s a friendly kind of rivalry, unlike Bama and Auburn, like the guy killing the trees. Here, the level of rivalry was so interesting and funny and cool. One of the members of our team told me about how his kids’ teachers were wearing their favorite colors, Carolina blue or Duke blue, so I started hearing the human stories of it.

Now that you’ve interacted with people from both sides, you must have a favorite, right?

I used to be agnostic, and now that I’ve made the film, I’m truly a fan of both. I didn’t have a favorite going in, had a lot of people on my team — everyone on my team was on one side or the other — who were able to maintain that balance journalistically, and I was inspired by and respectful of everyone that’s part of that rivalry. Going into the bars and watching fans have so much fun about it, that was great. On Franklin Street when the Austin Rivers shot went off in the Dean Dome, we were walking from I think Goodfellows, and I’m like, “All right, they’re up by 12 points. This is over.” I don’t know the rivalry that well, and Hassan looked at me and was like, “I got a funny feeling about this,” so we ducked into a little café, watched the Rivers shot there, and I was exposed to that feeling of high-high and immediate low-low.

I watched all of the fans spill out on to Franklin Street and they were just shocked, and I really got a true feeling of the emotional valence of this rivalry. People were literally so worried and upset because they were in such shock, so for me to be able to experience that was a great moment for the film. And of course, Carolina did beat Duke at Cameron, so there was that balance.

When I was younger, I was a fan of all of these L.A. teams, but I’m a little older now, so it’s easier for me to balance. I truly am a fan of both, and I met Coach K briefly, and saw Roy [Williams] and all of those guys, and I can’t pick one now. They’re all great folks.

Fine, fine, I’ll let you off the hook on that one. This story has been told before, not just in book form, but in video. How was this project different?

We get that Michael Jordan and James Worthy and Christian Laettner and Grant Hill tell the same stories of the game, well that’s been done. HBO did one two years before we started this one. Creatively, I wanted to do something different. The team agreed that instead of doing the sport-venture film, we wanted to focus on everyone behind the scene. Of course we would interview Coach K and Roy Williams, but what makes this movie different is we wanted the audience to feel like they woke up there, spent the day there, were just getting ready for something special, and the ability to creatively be able to implement the idea and have the team to do it was great.

Yeah, one of the great parts of the documentary is how the team actually hits the streets and talks to fans in the area. How did you guys go about choosing the locations to film?

We wanted the environment, so the campuses, the bars, the police station, the fire station. We had plans to interview 50 people, so we did Chapel Hill first, started at 7 a.m. and went with it. Like most films, half of it was planned, where Hassan and Art were able to go and connect with the restaurants and the people. How we got started with four gentlemen in the café in the morning, that was an accident. Then we found another couple, the husband and wife sitting at a table, and then the day just started rolling, going from location to location and finding people. That’s how it went for Carolina day, and we came back later for Cameron Indoor. We went to the café, the family where the daughter went to K-ville when she was 3, and then talking to Duke’s athletic director and chancellor and some of the more well-known people. We did the majority of filming over two days.

Beyond the local cafés and bars, you also went to the campuses of both schools. What is it like visiting K-ville or talking with students at The Pit on game day?

Until you meet the people, you really don’t have an idea, and hopefully the film does that a little bit, but when you meet the kids in K-ville, you see how excited they are. These are kids that come from pretty nice backgrounds and are sleeping in tents, their things are getting dirty, and they don’t care. They’re just so excited to be at that game, win or lose. The intensity to being there, the contrast between Carolina’s campus and Duke’s campus, and the two arenas. You have the kind of loud environment that you have at the Dean Dome and playing in the nice dome, and all of that is one type of experience.

Then you have the small, cramped, breathing-down-your-back if you’re a player at Cameron Indoor and the people there. When the guy talks about how kids are sneaking in, trying to sleep in the bathroom, that kind of thing was what I was amazed at. All eyes are on the game, and the minute people wake up the next day, well, one of the couples we interviewed said he woke up and watched that game over and over. It was 10 a.m. and he had already watched it over and over again.

Wow, that’s really crazy. What about from the player perspective? From talking to them, did you notice anything special about the rivalry or changes from the way it was then versus how it is now?

The teams have a much healthier relationship than they did in even the ’80s. There were these two players I interviewed, they were both on the Lakers last year, Chris Duhon and Antawn Jamison. I sat the two down and had them now talk about it, and they were joking with each other. When Duhon made that last shot, Antawn started jumping around saying he didn’t see it. They were having fun with the rivalry, and it extends beyond time. Even now, Kendall Marshall and Ryan Kelly, that’s another Duke-Carolina rivalry with the Lakers.

This rivalry is what sports are all about. These two teams are competing on the highest levels of competition. When you root for your team, you want to have that rival, that USC/UCLA, that Yankees/Red Sox, but so many rivalries go by the wayside; even Celtics/Lakers had a good run, but it’s not like it was in the ’80s when Bird and Magic were doing it. But with this rivalry, the first coach for Carolina (Frank McGuire) came from New York to Carolina. It started then and maintained through Coach K, a great leader for Duke, and Roy. They have a rivalry that doesn’t boil down to fighting. Sometimes you say something at home, or there’s an office rivalry split, but it’s two times a year, and sometimes during the ACC tournament, maybe one day at the NCAA tournament.

They get fired up, have fun, have a party, and the winner wins, the loser loses, and there’s another game in that year or next year. And they go right back to it.

This interview has been edited and condensed. You can watch Duke-Carolina: The Blue Blood Rivalry on either iTunes or Amazon. The Duke-UNC game will be televised on ESPN at 9 p.m. ET Wednesday at the Dean Dome.