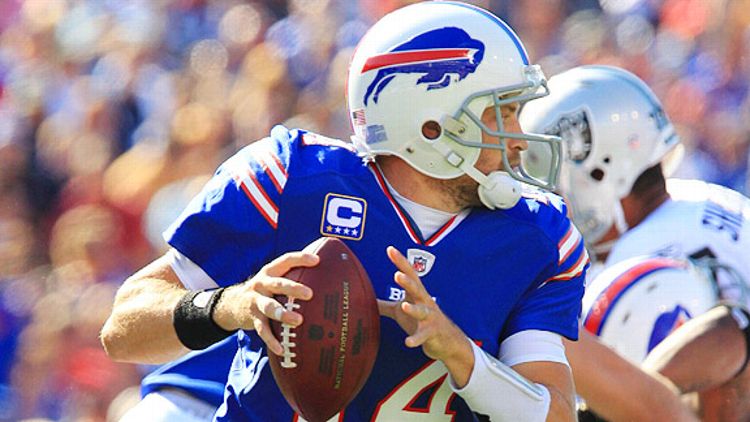 Coming into this season, I didn’t think the Buffalo Bills were that bad. Apparently, neither did the Bills. Buffalo won again Sunday to bring its record to 2-0. The Bills crushed the Kansas City Chiefs en route to a sleepy victory in Week 1, but their win Sunday over the Oakland Raiders was full of pyrotechnics: an 18-point comeback and a back-and-forth fourth quarter capped with Ryan Fitzpatrick’s touchdown pass to David Nelson to give Buffalo the lead.

What made the play even more staggering was how Nelson was. How, in such a critical situation, can a guy who had already caught nine passes be left that wide open? The mistake is understandable (even if it isn’t excusable).

The route concept the Bills used on the play is an old West Coast offense staple: the “drive” concept. On the play the outside receiver, usually in a short motion (just as Nelson was), comes in motion toward the line of scrimmage and runs a crossing route. An inside receiver will push straight upfield to 10 to 12 yards and break across (on this play, the Bills used a man-to-man technique in which the receiver turned outside but pivoted back inside), while a third receiver, in this case the running back, ran to the flat.

The point of the play is to confuse the defense and to “rub” defenders against each other — making them climb over and past receivers and their own teammates to get to their assigned receiver. But rarely does it work out so well for the offense.

The Raiders lined up in a man-to-man defense with a safety in pass support, but he was cheated to the two-receiver side on the other side of the field to help with Bills go-to guy Stevie Johnson. So far so good: Everyone is in man-to-man coverage and everyone should have their man.

The breakdown happened when the running back ran his swing route to the sideline: Two, not one, man defenders followed him, a mistake caused by the tight bunch formation and the crisscrossing routes. Because that kind of route is so difficult to defend man-to-man given all the traffic, many defenses use something called a “banjo” technique. That’s just a fancy way of saying something like this: I have this guy and you have that guy, but if they crisscross right away and one runs to me and the other runs to you, we’ll just trade assignments.

That’s all well and good, but the problem for the Raiders is that apparently only the cornerback got the memo; the inside defender didn’t look for Nelson on the cross and instead followed the swing. The result? A wide-open touchdown.

Related: Can Ryan Fitzpatrick Save Buffalo?