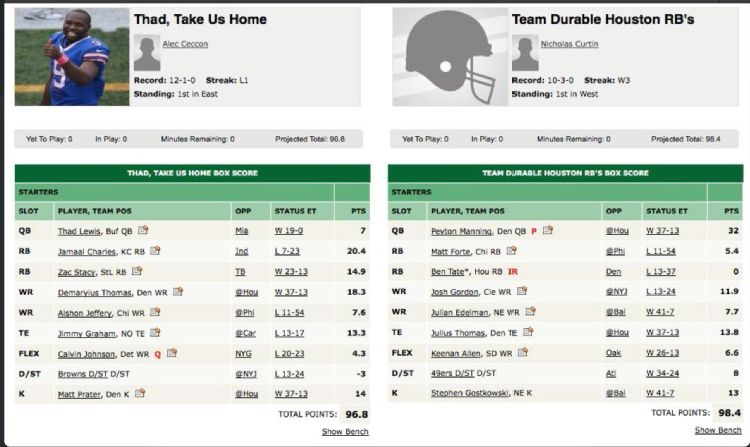 And you thought it was going to be so simple. But with (yet another) meaningful Dallas game in December waiting for Tony Romo and his tragic reputation this Sunday night against the Eagles, disaster struck for the Cowboys.

Romo suffered what appeared to be an ankle injury during the game against Washington last week before leading the Cowboys back with an incredible drive for the win. But it was apparently a herniated disk, an injury that should keep him out for the remainder of the regular season and all of the 2013 playoffs. Dallas is denying the severity of the injury, but it’s also trying out David Carr this morning, and it’s not like he’s suddenly in vogue. Kyle Orton is almost surely going to be the starting quarterback for the Cowboys from here on out.

You don’t need me to tell you that going from Romo to Orton represents an enormous downgrade for the Cowboys. Orton’s one of the better backup quarterbacks in football, but he’s replacing one of the NFL’s best starters. Even if you were down on Romo for his poor play in key moments like the one he was about to face in Week 17, the last time Orton was getting reps was in 2011, when he was benched (rightly) for Tim Tebow. What’s really interesting is trying to figure out how the move will affect Romo’s legacy. If the Cowboys lose Sunday, almost no one will remember what Romo did to lead his team back in Week 16. He’ll get written off as a failure because he wasn’t healthy when the Cowboys needed him.

On the flip side, what happens if Orton plays well and the Cowboys beat the Eagles before making a deep playoff push? Orton is capable of such a run, having exhibited signs of above-average play for stretches in the past. If he does, though, the coverage is going to be insufferable. We’ll be having a national debate about whether the Cowboys ever needed Romo to begin with and how the Cowboys might be better off without him. That’s absurd, but couldn’t you see that conversation happening publicly?

No matter how well Orton plays, let me be clear: Unless he’s injured, Romo is going to be the starting quarterback for the 2014 Dallas Cowboys. Romo just signed a seven-year contract extension this offseason, and it’s going to keep him in a Dallas uniform for a long time to come, even if the Cowboys see something in Orton that made them want to keep him around as their starter.

$41.7 million. That’s how much the Cowboys would owe to Romo on this year’s cap if they decided to cut or trade him after this season. He’s already on the cap for $21.7 million (before a likely restructuring of the contract), so the Cowboys would be eating $20 million on their cap this year to pay the Romo debt. They could designate him as a post–June 1 cut and apply some of his cap hit to the 2015 cap, but in either scenario, the Cowboys simply owe Romo too much to move on from him. This is a temporary respite, not a permanent one, regardless of how well Orton plays during his run as Dallas’s injury replacement.

Obviously, the Romo news has affected Dallas’s chances of winning Sunday. The Cowboys were three-point home underdogs before the news broke; after the Romo story hit Twitter, the line moved four points. Dallas is now a seven-point underdog for its must-win game. The money line moved concurrently and, combined with the Eagles money line, implies that the market believes the Cowboys have just less than a 27 percent chance of winning. Before the Romo news, they were right about an even 45 percent. Imagine how much the line would have dropped if everybody didn’t believe Romo would have failed in the clutch anyway!

As promised, I went in after the Sunday-night game and replaced my log5 estimates for each playoff contender’s winning percentage in Week 17 with the Vegas money-line estimate, since I think that does a better job of capturing the public’s perception of each team’s true chances of winning next week. When I wrote this on Monday night, there were no money lines available for the games involving the two teams from the Monday-night game (Atlanta and San Francisco) and for the Chicago–Green Bay tilt. I continued to estimate those games’ win percentages using the log5 method and each team’s point differential.

There were a number of notable changes within given matchups, but outside of the Eagles situation, the broader picture didn’t shift very much. It seems like the Chiefs will probably sit some of their stars in a meaningless (for them) Week 17 game against the Chargers, so San Diego’s win expectancy per Vegas is way higher than my initial estimate. That strengthens both San Diego’s chances as well as Miami’s, since the Dolphins would get in with a Dolphins win and a Chargers win. Those improvements come at the expense of Baltimore’s chances (although the Ravens would qualify if all four wild-card candidates lose, as opposed to what I mistakenly said yesterday). In fact, after I plugged in the Vegas money lines for all four relevant AFC matchups, the Chargers actually have a slightly better shot at making the playoffs than the Ravens do:

Meanwhile, the 49ers clinched a playoff berth with their narrow win over the Falcons on Monday night. Had they lost, all kinds of different scenarios would have cropped up. The Cardinals-49ers game would have become the third play-in game of the weekend. Seattle would have sealed up the top seed in the NFC, which would have allowed it to rest its starters in Week 17. Alas, that’s no longer the case.

At the moment, if everything goes as planned, the NFL’s six seeds in each conference will stay the same in Week 17. Seattle will win at home against St. Louis and clinch the top seed, Carolina will beat the pesky Falcons in Atlanta to claim the NFC South and the 2-seed, with the Saints beating the Buccaneers to nab a playoff berth and knock the Cardinals out of the playoffs. San Francisco will beat Arizona to lock up the fifth spot, while the Eagles and Bears will win their divisional play-in games to seal the third and fourth spots, respectively. That’s the most likely scenario, but there’s just a 12 percent chance that all six games will go that way. There’s likely to be at least one upset Sunday, and that loss will have ramifications.

Here’s the updated estimate for each team’s playoff chances and shot at each given seed heading into Week 17. Note how the Eagles have leaped up over the past 24 hours:

Given the relatively resigned chatter surrounding Aaron Rodgers, my suspicion is that the Packers are overvalued by log5, since it includes the Packers’ point totals from Rodgers’s time with the team. If we just use their numbers from games with Seneca Wallace, Scott Tolzien, and Matt Flynn as their starting quarterbacks (the WTF Era) and plug them into a log5 equation, the Packers’ chances of winning fall from 48.5 percent to 30.5 percent.

Beyond that, having already projected into last night’s numbers that the 49ers would beat the Falcons before it happened, the odds for each given team haven’t changed very much. Essentially, there are six teams competing for three slots: Packers-Bears, Cowboys-Eagles, and Cardinals-Saints. The first two combinations are actual games that will happen Sunday, but the Cardinals and Saints are also competing for one playoff spot, too, just not directly. The Cardinals need to win and hope the Saints lose, which would knock New Orleans out of the playoffs; likewise, a Saints win or a Cardinals loss would push the Saints into the playoffs. There’s no scenario in which they can each make it into January. The Cardinals and Saints are playing a playoff game this weekend, just not against one another — and with the odds greatly weighted in New Orleans’s favor.

Earlier this year, when the Bills named journeyman passer Thad Lewis as their quarterback for a game against the intimidating Bengals defense, I dared fantasy football owners around the country to bench their usual starter and stick Lewis into their fantasy lineup. It was the #thadchallenge. It was … OK, it wasn’t a hit. But it made me laugh, and when Lewis produced an extremely competent game under center, it actually helped some folks win their games that week.

The second contest has to be harder than the first, of course. When the Bills named Lewis as their starter for Week 16’s game with the Dolphins, SB Nation’s Jon Bois asked me to bring back the Thad Lewis Challenge for Week 16, the traditional fantasy football championship week. I couldn’t say no.

As you might suspect, far fewer people had the guts to insert Lewis into their lineups when their fantasy crowns were on the line. (I specifically ruled out multi-QB leagues.) I received a handful of entries and decided to select one … finalist for the Thad Lewis Challenge. I verified through screenshots that these were teams that were legitimately in the playoff finals of their leagues.

That finalist, unfortunately, played the Thad Lewis Challenge the way he was supposed to and still lost. Alec Ceccon got cocky and thought he could just finish off his opponent, 10-3 Nicholas Curtin. Curtin was equally cocky. Ceccon thought so little of Curtin that he put Lewis into his starting lineup for the final game of the year. Curtin thought that wasn’t enough and kept an injured Ben Tate in his lineup. In any case, Lewis could muster up only seven points, and Ceccon’s team lost in ignominious fashion:

Then again, fantasy teams with Thad Lewis as their quarterback mostly deserve to lose in ignominious fashion. Congratulations, Alec. Please accept my apologies. And thanks to the others who participated!