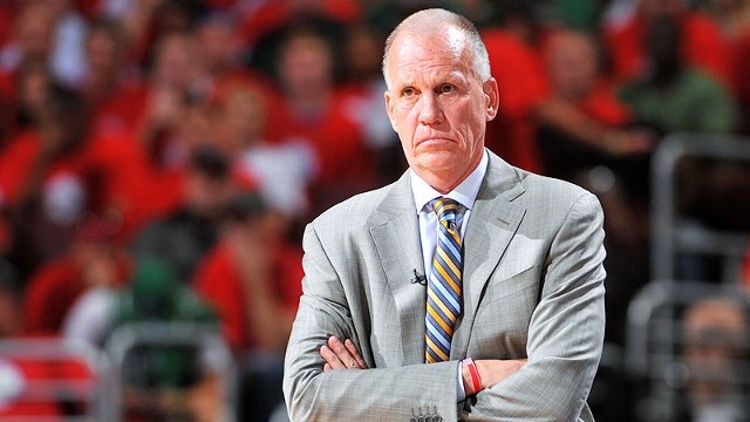 A lost season hit its low point last night in Philadelphia, when an Orlando team that is now 4-28 in its last 32 games blew out the Sixers, resulting in a postgame borderline meltdown from Doug Collins. Over an excruciating 10 minutes, Collins did the following:

• Passed the buck for Philly’s awful game almost totally onto the players, saying he’s only in charge of “execution,” while implying the players are responsible for everything else. That includes “effort,” Collins said. And more: “I did not think our guys prepared themselves during the [All-Star] break to come back and play.”

• Went out of his way to specifically mention that Nikola Vucevic grabbed 19 rebounds, while Spencer Hawes snagged just one in 21 minutes. In related news: Vucevic was a member of the Sixers last season, and he was even in the rotation before Collins tossed him through the always-revolving turnstile that leads to Collins’s doghouse. Vucevic played less than three minutes total in Philly’s 13 playoff games. The Sixers’ front office, acting to a large extent under Collins’s directive, traded Vucevic, Moe Harkless, Andre Iguodala, and a future first-round pick away in the Andrew Bynum deal.

• Mentioned repeatedly that the Sixers have gotten nothing out of the Bynum deal. Bynum has not played one minute this season, and it’s clear now that he’s going to play only a token number of games, if any at all.

Collins has a right to be frustrated. The Sixers built around a player who is not playing and may never play for them. They lost another integral piece in Jason Richardson, an active catch-and-shoot player with responsible shot selection, sorely needed 3-point range, and a willingness to play hard — and correctly — on defense. The Sixers have actually functioned quite well this season when Richardson has been on the floor with two or all three of Evan Turner, Jrue Holiday, and Thaddeus Young, per NBA.com’s stats database. (That quartet has outscored opponents by about three points per 100 possessions, the inverse of Philly’s negative overall scoring margin.) The Sixers have given Richardson’s minutes to some combination of Nick Young, Dorell Wright, Damien Wilkins, Royal Ivey, and Jeremy Pargo. It has gone about as you’d expect, and it got worse when Thaddeus Young had to miss a handful of games with a hamstring issue.

Hawes has regressed on the glass and as a defender, and he has never approached the level of two-way efficiency he flashed during a red-hot start to last season. He is like Philly’s conservative talk-show host version of Andrea Bargnani in this sense, and in other senses. (Note: Hawes’s combination of shooting and passing could make him a useful piece in someone’s rotation, but it hasn’t worked in Philly.) Turner has shown some progress in Season 3, including a corner 3-pointer, but it has come in fits and starts and hasn’t been nearly dramatic enough to offset all the other bad stuff. Basically: Philly has a losing roster, and they are losing a lot of games one year after winning better than half of them. The Sixers are 12-27 since starting 10-6, and they are almost certainly done as a playoff threat. That would frustrate any coach.

Except for two things:

1. Collins played a large role in putting this roster together.

2. He has coached it with an offensive philosophy that quite clearly doesn’t work.

The Sixers are 27th in points per possession, in real danger of falling to 29th, and with an outside shot of overtaking the comparatively scorching Wizards for dead last before the season is through. They were 17th last season, which makes it sound as if their collapse this season has been somewhat surprising. That’s not the case. After a promising start to last season in which Collins’s motion-heavy system produced top-10 results, the Sixers’ offense fell apart; Philly over its last 45 games scored at a rate that would have ranked about 23rd for the full season, and they were a disaster against two stingy defenses — Boston and Chicago — during the playoffs.

Last year’s Sixers had all the hallmarks of a terrible, antiquated NBA offense. Only one team attempted fewer shots in the restricted area, per NBA.com. Only five attempted fewer 3-pointers, and just three tried fewer of those juicy corner 3s. Philly led the league in midrange 2-pointers, the least efficient shot in the league, and set an all-time NBA record for futility in getting to the foul line. The flip side: Philly’s offense was so low-risk — so averse to post-ups or aggressive forays into the lane — the Sixers also set a record for the lowest turnover rate in league history. But taking care of the ball doesn’t matter if you take bad shots and miss most of them.

Bynum was supposed to change that by working as the bulwark of an inside-out offense, bullying guys down low and kicking to the army of shooters with whom Philly had surrounded him. But Bynum hasn’t played, and Collins has fallen back on the same conservative offensive philosophy, with some small X’s-and-O’s tweaks and tiny steps in the right direction. Philly now ranks a robust 21st in shot attempts within the restricted area, progress that would mean a bit more if Philly weren’t on pace to obliterate the anti–free throw record it set just last season. (Orlando is on pace to do the same, and free throws have fallen to record-low numbers over the last few seasons.) Only five teams have taken fewer 3s, though Philly, thanks in large part to Turner and Young, has added about two corner 3s per game to its repertoire. And once again: Nobody has taken more long 2-point jump shots.

It is just very hard to win this way, unless you have two historically elite midrange shooters — something along the lines of the Jason Terry–Dirk Nowitzki combination who drove top-shelf Dallas offenses that scored well despite (at times, and not in their championship year) a suboptimal shot selection.

Philly does not have such players. There are two solutions to that problem: get different players or coach the ones you have differently. Save the Bynum trade, Philly has punted on both choices.

And “save the Bynum trade” isn’t some throwaway caveat. The Sixers could have begun last summer’s free-agency frenzy with about $20 million in cap spacing after using the amnesty provision on Elton Brand and letting Lou Williams — an actual productive offensive player — walk away. They almost immediately used that space on Hawes, Wright, Nick Young, and Kwame Brown. Read those names again. Wright and Young fit with the “we need to embrace 2008 and shoot more 3s” notion, but Collins soured on Wright after briefly using him as a small-ball power forward, and everyone sours on Young eventually. Brown’s failure to earn even token minutes is probably a surprise to everyone but Collins, who touted Brown as a potential starting front-court player (alongside Hawes) and coached him in Washington, during Collins’s disastrous, cantankerous, Jordan-tainted tenure there. And the last person who should be surprised at Hawes’s limitations on D and on the glass is the guy who has coached him since 2010 and voluntarily re-signed him for $6.5 million per season.

That $20 million could have brought any number of players who might have helped on both sides of the ball, even if some of the prime jewels on the market were restricted free agents. Orlando signed-and-traded away Ryan Anderson, an impactful long-range shooter who boosts the offense whenever he’s on the floor, for Gustavo Ayon and a trade exception. Ersan Ilyasova was available with a similar skill set, and with similarly shaky defense. Philadelphia could have leveled the Bulls with the same exact poison-pill offer — a short-term, three-year deal — through which Houston pried away Omer Asik.

Asik isn’t a star, but he brings two skills the Sixers lack now and lacked before the Bynum deal — a big guy who draws attention by rolling hard to the basket on offense, and a true rim protector who can thwart opposing pick-and-rolls. They could have found the “hard rolling” part of that skill set on the cheap with someone like J.J. Hickson, or nabbed a well-rounded offensive big guy off the amnesty market in Luis Scola. There are any number of perimeter guys outplaying the Wright-Young combination on cheaper deals, including O.J. Mayo, Kyle Korver (obtained via a trade exception, admittedly), Martell Webster, Carlos Delfino, and Jarrett Jack — the latter a player the Warriors snagged in the same three-team deal in which the Sixers landed Wright. Philly could have splurged on a defense-first jack-of-all-trades in Andrei Kirilenko or simply kept Williams.

There are roadblocks in all of these scenarios, including competition from other suitors and the preferences of the players themselves. But to come out with the players Philly chose represents a failure.

Ditto for Collins’s offensive philosophy. Give this same roster to Gregg Popovich or Rick Carlisle, and I’d bet good money they could lift it to within sniffing distance of league-average productivity. League-average isn’t great, but it’s good enough to be competitive. Philly hasn’t been competitive in months.

The Sixers could try pushing the pace, as Carlisle did early this season when he realized his team wasn’t good enough to score efficiently in the half court without Nowitzki. They could allow Thaddeus Young to shoot 3-pointers again. It’s a hazy memory now, but Young was a league-average 3-point shooter on a healthy number of attempts in both 2008-09 and 2009-10. They could have their bigs roll hard to the rim more often, just to see what might happen.

And again, Collins has tried some new stuff, including more corner 3s, some screen-the-screener action preceding Holiday pick-and-rolls, and a few other things. But the larger system is broken, to the point that Philly has thrown up its hands and embraced one of the simplest sets you’ll see in the NBA this season — a variation of the three-man weave, with the big men vacating the lane, that can either produce an isolation drive (at the start) or a modified screening action, like this one:

Collins is clearly a very good coach, despite what I’ve written here. He has helped every team he’s coached almost immediately upon his hiring, and he turned a “blah” Philly roster into a defensive powerhouse last season. Guys play for him, and they play defense, especially, the right way. And he’d do better with better players, and better health luck.

But he can’t pass the buck for what has happened to this Sixers team. An organization succeeds or fails as a whole. The next step for Philly — for Collins, and Tony DiLeo, and Rod Thorn — is to nail some very large offseason decisions over the next couple of years. A new deal for Bynum would soak up all of Philly’s $13 million or so in potential cap room this summer. A subsequent new deal for Turner would do the same the following summer and into the future. Are they worth it?