Do You Want Him on Your Team? The Vicious Brilliance of Ndamukong Suh 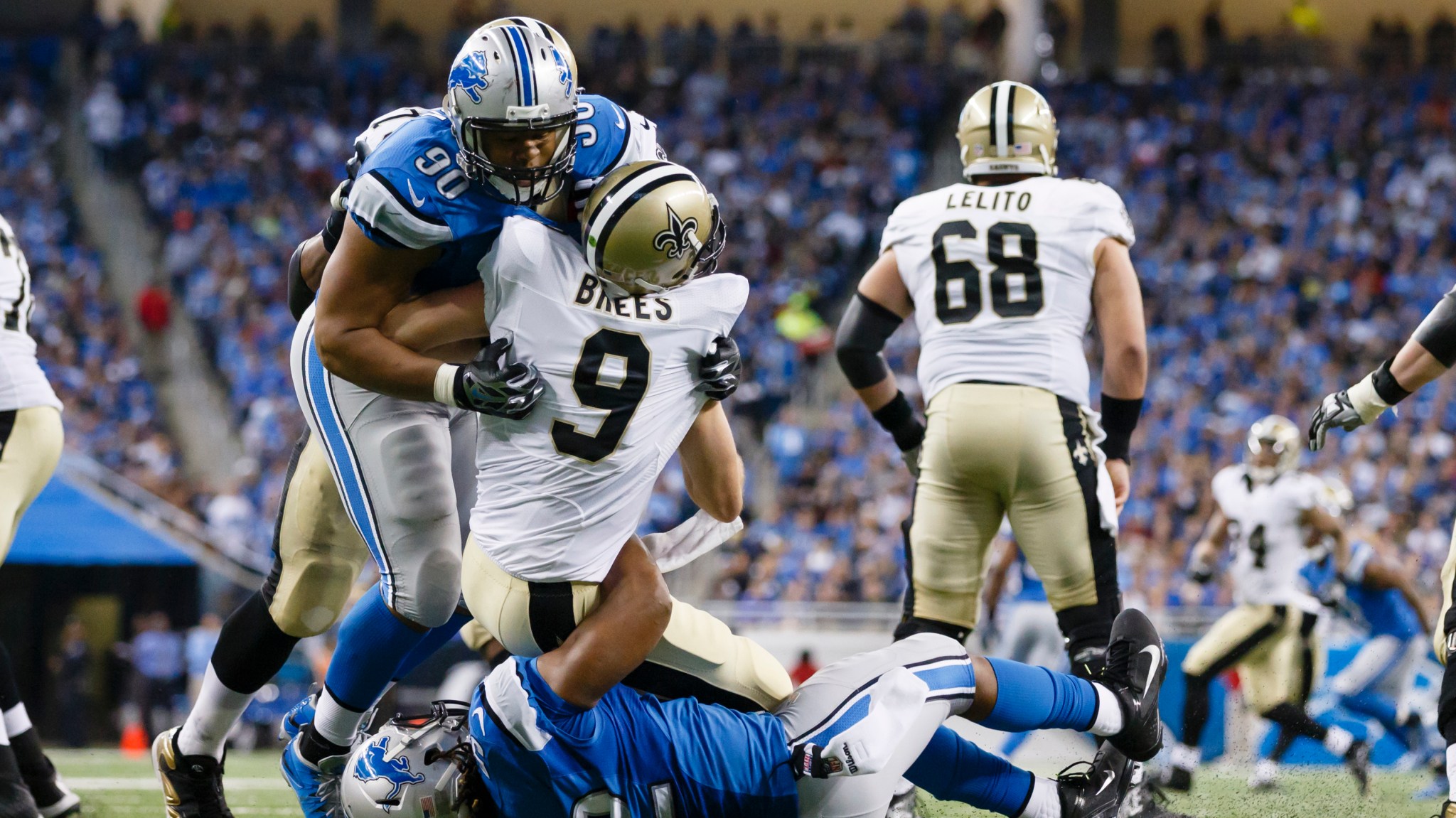 Ndamukong Suh, the NFL’s best defensive tackle, is entering free agency next week, after Detroit decided to save some cap space by not placing a franchise tag on him. Suh’s free agency is a time of dark hope for football fans. More than four years after his first fine for dirty play — which came during the preseason before his rookie year; say what you want, but the man knows how to make an entrance — Suh is easily the most reviled football player on earth. He’s also the best defensive player to hit free agency this decade, a stop-at-nothing, backfield-shattering terror who could alter the course of any franchise that signed him. And so, if your city is on his long list of potential suitors, the odds are good that you’ve spent this week sidling up to some uncomfortable questions.

Do you hate Ndamukong Suh?

Do you want him on your team?

It’s no mystery why Suh is so — I almost wrote “polarizing,” but that would imply the existence of a large segment of neutrals who defend him. Since his debut as the second overall pick in the 2010 NFL draft, Suh has been responsible for some of the most flagrant player-safety violations in the league; he’s a cheap-shot all-star, a player who’s provoked not one but several national scandals just by being a dick. Suh is the guy who stomped Evan Dietrich-Smith’s arm (on Thanksgiving), who kicked Matt Schaub in the groin (also on Thanksgiving), who drew a record $100,000 fine for chop-blocking John Sullivan (not on Thanksgiving, but Sullivan might have woken up thinking it was). Suh is the guy who cultivated a years-long hobby of murdering Jay Cutler — not always even illegally! — by ripping his helmet off, walloping him in the head, and doing things to him that there are not verbs for in English. Suh is the guy who, just this past December, stepped on Aaron Rodgers’s injured leg. Suh is relentless, aggressive, massive, strong, and at times uncontrollable; it’s a scary combination. Bill Romanowski once shattered the eye socket of one of his own teammates during a practice scrimmage. Here is an Internet list of dirty players in which Romanowski was voted second, behind Suh.

Do you want a guy like that on your team?

How flexible are your feelings about him?

It’s not this simple, though. The resentment that fans feel for Suh may begin with his specific infractions, but it gets beyond them pretty quickly — there’s no way, for instance, that the stomp on Dietrich-Smith would have been the world-ending scandal it became if it hadn’t happened on a football-focused national holiday, when half the country was watching over pie. (Think of the children!) Suh has a weird way of taking the unpleasant forces that the NFL normally keeps repressed and exposing them on national television. We all know that being at the bottom of a pile is a nasty business; it’s an open secret that a lot of violent stuff happens around NFL plays that never makes it on camera. But when you hear ex-players reminiscing about the twisting/grabbing/ball-punching/etc., it’s usually accompanied by a lot of wry chuckling and boys-will-be-boys fondness from whatever afternoon radio host happens to be asking the questions. We can afford to find that stuff amusing as long as we don’t have to witness it, in the same way that “locker-room antics” were seen as good fun before Richie Incognito put Jonathan Martin in his iPhone contacts.

But then here comes Ndamukong Suh — 6-foot-4, 305 pounds, and blazing with talent, a quarterback-harrying nightmare — and he doesn’t have the courtesy to keep his viciousness offscreen. He’s right there, stomping and smashing and kicking on your DVR, on your ESPN app, on your Facebook feed. He forces you to watch — not because he wants you to, but because whatever tiny surplus of aggression makes him 2 percent more ruthless than other players is also the difference between bending an opponent’s finger back in a pileup and standing on top of him screaming “Are you not entertained?” on CBS.1

How would you judge someone who bought his jersey?

Could you cheer for Suh?

In his worst, most announcer-melting moments, Suh leaves you disturbed, not just by the bad thing you saw him do but by what that bad thing suggests about the NFL itself. It’s tempting to see Suh as a kind of antihero, someone who does frankly what his peers do only in secret and then is martyred for it by a hypocritical punditocracy. The problem with that explanation, of course, is that Suh always denies having done anything at all. But the overdriven belligerence that makes him a perpetual stomp risk is also what makes him such a formidable defensive player, so what do you do with that? Suh’s teammates talk about him with a kind of awe: someone who never takes a play off (basically unheard of on an NFL defense), who never stops grinding, who’s always switched all the way on, who’s never satisfied except by total victory. Early in his career, Suh had to make a conscious adjustment to do stuff like say hi to other players in the hall; he was so intense that it made him almost otherworldly. So to call him a brilliant player who sometimes snaps after the whistle is the wrong way to read his career. He’s a brilliant player whose voltage regulator sometimes can’t handle that much juice.

Football is violent, because we like fantasizing about violence. But the violence of football is controlled, because the fantasy of violence can be taken only so far and still remain a fantasy. This leaves the game in a state of constant tension, and many of the problems in the NFL’s wide and starry universe of contemporary problems have to do with how that tension manifests off the field: domestic abuse, concussions (which are sustained in games but mostly make themselves felt much later), CTE-linked mental illness, suicide. To the extent that Suh is a problem for the NFL, he’s a minor one compared to any of those. But he makes it impossible to ignore how the tension between violence and control manifests in the game itself. He shows that the détente breaks down on the field too. When he’s playing, it’s harder to rest in the assumption that we can criticize the NFL on Saturday and then uncomplicatedly enjoy Sunday’s games.

Suh plays with a zeal so huge it threatens to eclipse the rulebook. The hard question — and the question you have to ask yourself, if you want to go on hating him — is where does that insatiability, that keenness, come from? We want football players to be blood-scenting berserkers half the time and upstanding sportsmen the other half; even if you don’t agree that the line is in kind of an arbitrary place, can you imagine how hard that would be to navigate, from Pop Warner on? You’re a big, fast kid who can hit people hard. You’re taken into a room and told, first of all, that this makes you special, and second of all, that your special self is subordinate to a team. You’re told that all your future specialness will depend on how completely you subordinate yourself. You’re told to give everything. Give your all. Leave it on the field. Never stop trying to win. Never stop trying to get better. You’re told that there’s no room for weakness. You’re told that there are no excuses. You’re told to make yourself a weapon. You’re told that the only thing that matters is beating your rivals. You’re told to call me sir. You’re told that what you’re doing when you’re playing defense is hunting. You’re told to seek out any edge, any advantage, any crack you can use for a toehold. If you win, the crowd roars your name. But the crowd will like you only if you’re humble. The crowd is screaming for you to kill your opponent. But do it at the wrong time, in the wrong way, and they’ll turn on you. Be a warrior. Be a killer. But be respectful. Give 110 percent, but hold yourself in check.

As a set of inputs, this is madness. What person’s brain could line that up into anything like coherence? Fortunately, most players take the messages they get from football with a grain of salt, and in the context of a million other messages that work together to influence their judgment — because that’s how minds work. But what if someone followed only the football inputs? What if someone actually believed them? What if someone tried to be as possessed, unyielding, single-minded, obedient, and merciless as a football coach yelled at them to be? Combine that with world-class physical talent and wouldn’t you get an astonishing, driven player whose judgment was subject to these massive short circuits? Wouldn’t this hypothetical player look a lot like Ndamukong Suh?

Do you hate him?

Could you cheer for him anyway?

Football players live in that nebulous realm between violence and discipline, between rage and deference. If Suh shows us anything, it’s how murky this territory really is. We expect players never to cross a border that’s almost invisibly thin. Suh makes us uneasy, and not only because he tries to hurt people. It’s also because he drags into the light something we’d prefer to keep hidden — the game is what we made it. The things we like least about football are things we put there ourselves.

Do you hate him? Do you?

But do you want him on your team?