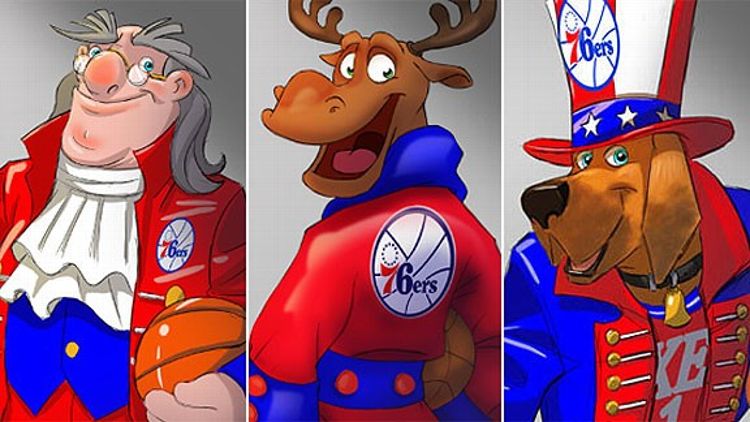 In late November, the new owners of the Philadelphia 76ers announced that Hip-Hop, a doo-rag-wearing rabbit who was the team mascot since 1996, had “relocated to a rural part of Pennsylvania to start a family.” We can read between the lines. That’s corporate code-speak for “sentenced to 12 years in Frackville State Correctional Facility for his role in a home invasion robbery spree.” But whatever the cause for Hip-Hop’s removal, it may have been time for a change.

During the days when Allen Iverson bounced across the hardwood like a malevolent tumbleweed, Hip-Hop was a fitting mascot for the team. Sure, the muscular, sunglasses-clad bunny was the NBA’s version of The Simpsons’ Poochie, an idiotic creature squeezed from the womb of bungling marketers who hoped to capitalize on the cachet of urban cool. But Iverson was the face and tatted neck of the franchise, and Hip-Hop was a derivative underling who dunked off trampolines during TV timeouts and otherwise got out of the way. The modern equivalent would be the Mavs creating a flaxen-haired German mascot named Kaiser von Dunken who rifles schnitzel into the maws of the crowd.

What does Hip-Hop have to do with the current incarnation of the Sixers franchise? Not much. Like a woman who now dates teetotaling accountants because she was once mistreated by a rock star, Philadelphia management has painstakingly assembled a collection of high character, nonthreatening, mostly mediocre players. Perhaps they will eventually finish the season with a winning record, but in the meantime, they’re a nice group of guys to eat ice cream sandwiches with. Unless Drake was willing to spend this winter crooning in the Wells Fargo Center, a mascot named Hip-Hop isn’t the ideal representative.

But Hip-Hop also was a remnant of a different NBA. Following the 2004 brawl between the Pacers and the Pistons, NBA Commissioner David Stern wielded the powers of an ornery headmaster to ensure Caucasian fans would not urinate themselves with fear at the sight of the large black men who dominate the league’s pantheon of superstars. Draconian suspensions for tussling were instated. Taunting and celebrating were outlawed. Complaining to the referees was banned. And a dress code was installed to guarantee that players dressed like tax magistrates instead of rappers (that edict may have mushroomed into an era when guys like Amar’e Stoudamire and LeBron James crouch in front rows during Fashion Week and daintily pluck at crudité aside Anna Wintour).

For the time being, let’s ignore that Big Ben looks strikingly familiar to the mascot used by University of Pennsylvania Quakers. Let’s ignore that he bears a strong resemble to the porridge pitchman on the vat of Quaker Oats. And let’s also ignore that a loveable, happy-handed character with the same name currently represents the in-state Pittsburgh Steelers. Beyond this lack of originality, having a mascot based on Benjamin Franklin propagates the notion that Philadelphia hosted the signing of the Declaration of Independence and then rested on its laurels for the next 235 years. At least the local Arena Football League team gave a nod to local legends like the O’Jays, Delfonics, and Patti LaBelle by dubbing the franchise the Philadelphia Soul. But most important, the last thing the Sixers need is Evan Turner spending his time on the bench watching the crowd cheer for a pacifist.

Just as Utah is renowned as a hotbed of soulful Jazz, the connection between Philadelphia and moose is profound. “Hey, I’m going to Philly for the weekend.” “Well, shit, you’ve got to try a ‘whiz, wit’ at Pat’s and see some Eurasian elk.” “Duh.” Yes, the boulevards of the city are teeming with giant herbivores that feast on the lush terrestrial vegetation sprouting along South 23rd and Tasker. For Sixers fans, the sight of Tyrone Hill riding his moose through downtown Philadelphia en route to another sterling four-point, seven-rebound performance at the First Union Center was one of those special shared civic moments.

More recently, who can forget when Spencer Hawes giddily drove his used Ford F-150 into a herd of moose after a wild night at a Sarah Palin book signing? Thank God for the three chapters on emergency field-dressing. According to the moose’s bio, he was “traded” to the 76ers this offseason. As it turns out, this was the final piece of the deal that sent Charles Barkley to Phoenix in exchange for Jeff Hornacek, Tim Perry, Andrew Lang, and Phil E. Moose. Time to reap the savory reward of venison sausage, Philadelphia!

Described as a “the All-American pet,” B. Franklin Dogg may be more dangerous than his Marmaduke appearance indicates. His surname indicates an association with Death Row Records’ Dogg Pound — although he was likely more of a Bow Wow than a Daz Dillinger in terms of street credibility — but his affiliation with the Bloods gang could be problematic. While B-Dogg appears a mindless, slobbering puppy who just wants Lou Williams to scratch his belly, we know he’s somewhere in this video, whiskers concealed by a red bandanna. Even if we give Dogg the benefit of the doubt and believe his days of gangbanging are ancient history, the NBA already has a mutt mascot in the Cleveland Cavs’ Moondog. Andre Iguodala can fabricate an interesting personality with fedoras and chunky-rimmed glasses. A dog wearing a big bell on its head still isn’t compelling. Screw this pooch.