Crime and Punishment: Should the Penalty Kick Spot Be Moved Back? 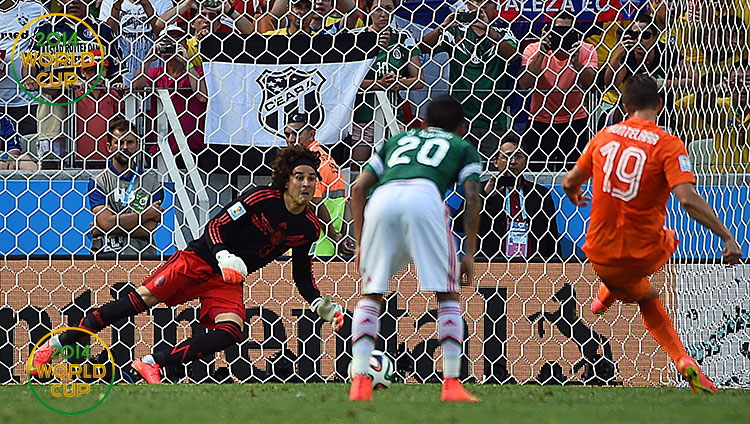 Yesterday in Fortaleza, a penalty in the box decided another World Cup match. For the second time in less than a week, a whistle helped determine the fate of an entire nation’s footballing dreams. Last Tuesday, it was the Ivory Coast. Sunday it was Mexico. These penalty-area calls and the direct kicks they spawn not only shape the outcomes of games in the world’s biggest sporting event, they also change the way players behave on the pitch.

1. During the group stage of the 2014 World Cup, players attempted 1,236 shots on goal; they converted 10 percent of them. Even within 5 yards of the goal, players still fail to convert even half of their shots (per Opta). 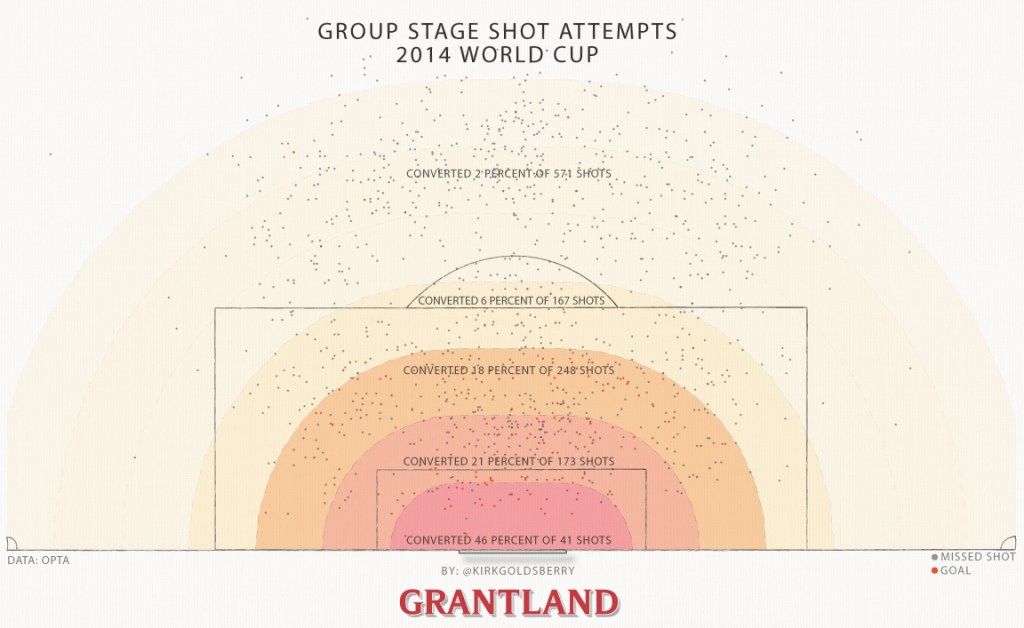 In other words, the best shots on goal at the World Cup almost always follow the sound of a whistle, something that savvy players like Arjen Robben are keenly aware of.

That the expected value of any penalty shot far exceeds that of almost any other “live play” scenario is not just some wonky statistical quirk. This is why Rafael Márquez’s “trip” so easily “felled” Robben on Sunday. Although Robben was undeniably threatening the Mexico defense, even the slight opportunity to draw a whistle — and a subsequent PK — at the moment Márquez’s boot disrupted his stride was too alluring to pass up. So Robben fell. And then the whistle blew. And, fair or not, Mexico went home.

While many hot takes today will surround the practice of diving, perhaps yesterday’s events should also prompt a discussion about the underlying motivations for diving in the first place. Instead of putting the entire onus on the competitors to “do the right thing” in the heat of the biggest matches of their lives, why not examine the wild punitive imbalances that provide the root cause of the problem?

Penalty kicks are the most draconian and most influential penalties in any sport. This is compounded by a needlessly inflexible penal code, applied within an arbitrary box, that disables referees from exercising any sort of reasonable judgment. The problem isn’t that Márquez may or may not have fouled Robben in the penalty area, nor is it that Robben may or may not have dove. The problem is the game’s current system of on-field justice. 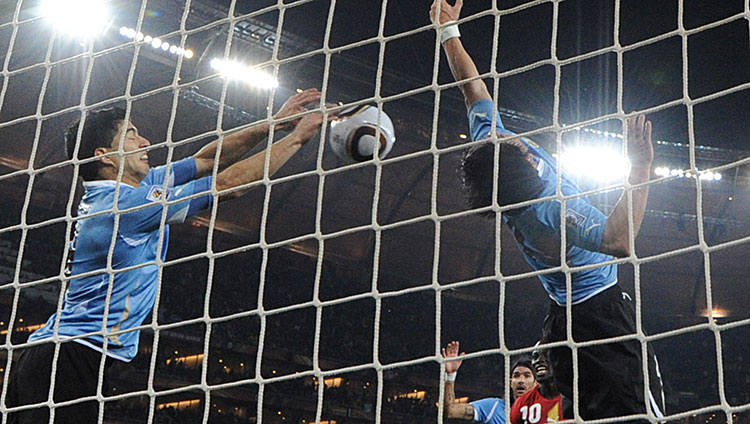 The fact that Márquez’s incidental foul is punished the exact same way as exponentially more egregious acts, like Luis Suárez’s intentional (game-saving) handball in 2010 is ludicrous. One is a misdemeanor, one is a felony, but in a world where no such distinctions exist, the sentences are identical, and the governing body errs on the side of punitive adjudication each and every time. In FIFA County, you go to the gallows for stealing a horse. You also go there for littering. 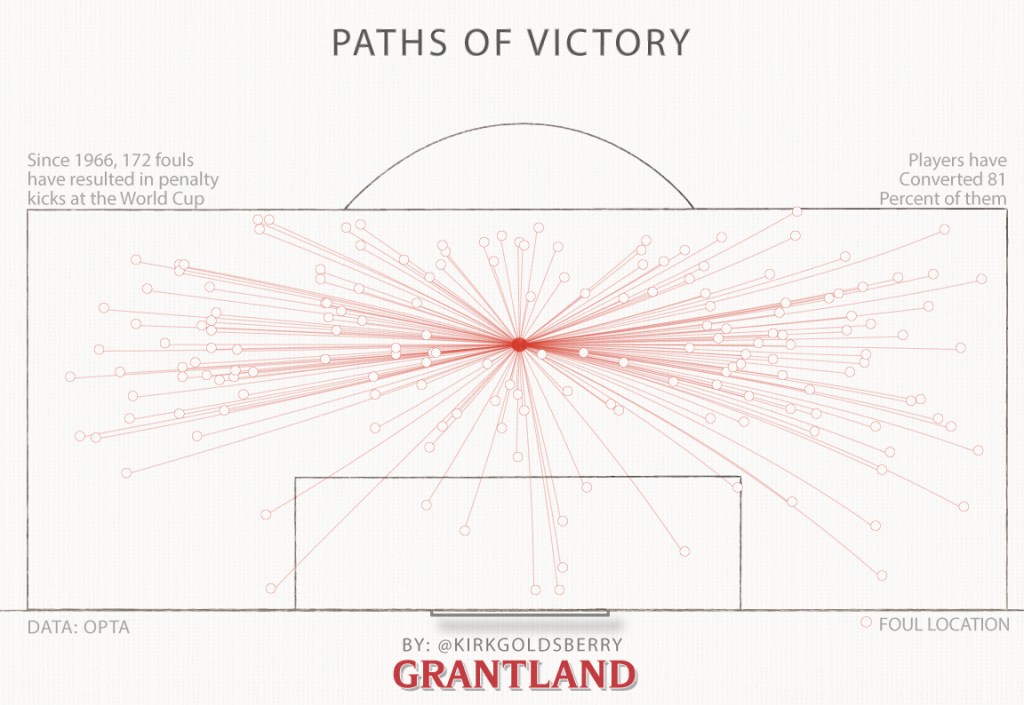 Basketball, which has its own problems in this area, at least uses a tiered foul system that enables officials to exercise situational judgment and penalize accordingly. Referees can call multiple levels of fouls — regardless of court space — including personal fouls (some of which are deemed “shooting fouls”), flagrant fouls, and technical fouls. Each kind comes with its own level of punishment, and in turn, in the world of basketball, the punishment is more likely to fit the crime. It’s not rocket science.

With the possible exception of the game’s most egregious acts, it’s hard to justify any case where awarding a direct kick 12 yards from the goal is a suitable consequence. While there’s no denying that there should be a punitive aspect to penalizing overly aggressive defensive play, the current penalty spot is probably too close to the goal.

Remember in the World Cup, 81 percent of trips to the penalty spot result in goals. That’s a really high number, and the core reason these penalties in the box often provide the biggest inflection points of these matches. What if the spot were moved back? What if that number were 50 percent or 33 percent instead? How would moving the penalty spot back a few yards affect this situation? If players converted half their penalty shots, would fouls in the box go way up? What if there were two penalty spots, a farther one for incidental fouls, a closer one for flagrant fouls?

These are interesting hypothetical questions. But they don’t have to be hypothetical, and maybe it’s time FIFA examines how it calls and penalizes fouls near the goal. Last week, I wrote about how it’s time for the NBA to at least consider moving back its 3-point arc, since that shot has become easier and more frequent than ever. Perhaps it’s also time for FIFA to do something similar. That unassuming little white dot in the grass too often becomes the most important mark on the pitch; we should at least put some thought into where it is.

The Sportstorialist: The Yeses, Nos, and Boy-Oh-Boys of the 2014 NBA Draft