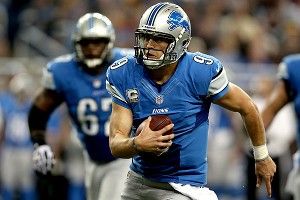 Quick poll: Did anyone else turn a 70,000 -jermajesties profit on NFL propositions last week, taking his or her season-long total to 182,0500 jermajesties in the plus overall? Probably not, since jermajesties* don’t really exist, except in Jermaine Jackson’s household. Actually, I did come across some good news, as the soon-to-be-defunct Hostess Brands Inc. has agreed to let me purchase their remaining stock using jermajesties. Looks like everyone’s getting a gross of Twinkies and Suzy Q’s from me for Christmas.

Where was I? Oh yeah — Twinkies. This is a tough week to pick props. Mainly because as of Tuesday night, there were absolutely none to be found.

Because everyone on the Grantland staff (including and especially myself) is too lazy to work on Friday, we’ll have to make do on three propositions that I’m pretty sure will be on the board, followed by a bunch I’m positive you will not be able to wager on.

Lions +3 in the first half vs. the Texans

We’ve been through this routine before. The Lions play tough on Thanksgiving for about an hour and then the tryptophan kicks in. And that’s in years past, when they could’ve been beaten by Glee‘s high school football team. Now they’re struggling but still decent. Most important, they’re facing a team that will have traveled twice in 11 days and just played a five-quarter game a few days ago. The Texans are more exhausted than the Weight Watchers employee who airbrushes Jessica Simpson’s “after” picture. They’ll show it for a while, at least. 20,000 jermajesties

Redskins will score over 22.5 points vs. the Cowboys

You might as well parlay this prop with over 6.5 pounds of squash casserole hurled at my flat-screen after RG3 runs for his fourth TD. Am I just another overreacting, whining Cowboys fan? Probably — but you would be, too, if you watched Brandon Weeden hop around the pocket for seven seconds at a time while laughing hysterically at Rob Ryan’s ineffective three-man rush. 15,000 jermajesties

Seahawks will score under 21 points vs. the Dolphins

Before playing this prop, ask yourself this: Would I ever bet Nicolas Almagro when he’s playing on grass or cement? Follow that with: Who the hell is Nicolas Almagro? Nicolas Almagro is a professional tennis player whose success has come primarily on clay courts. I’ll admit, I had to undergo an intense three-minute Google research expedition to find this out. Apparently, he’s made it to at least the quarterfinals of the French Open three times — never having done so in any of the other Grand Slam events. My point is, the Seattle Seahawks are the Nicolas Almagro of the NFL. I’m sure you’ve heard this comparison before. At home, Seattle and Russell Hustle-and-Bustle-Man-Muscle Wilson are dynamite. On the road, the Seahawks are subpar. Here are their point totals away from CenturyLink Field: 16, 13, 16, 6, and 24. In other words, if you played this prop under, you’d be 4-1. Make it 5-1 against the desperate Phins. 15,000 jermajesties

Over/under 12.5: Number of turducken references made by Joe Buck, Troy Aikman, and the Fox studio crew during broadcast of the Redskins-Cowboys game

News flash, fellas — John Madden choked to death on turducken years ago when his tour bus hit a pothole. Wait — that didn’t happen? My bad. Either way — it’s time to move on from the turducken. It’s our duty as American football fans to come up with a different beloved hybrid Thanksgiving bird. I vote for the pigeonowlibis. Dee-licious!

More points this year: Those allowed by the Raiders defense or those racked up on Lindsay Lohan’s driving record?

It’s only a matter of time before TMZ demands access to NFL stadiums to witness the train wreck left behind by the silver-and-black secondary.

From this point forward, what will happen first: An Arizona Cardinals quarterback starts three games in a row or permanent peace is achieved in the Middle East?

That’s a coin flip. From what I’ve seen, I actually think Ryan Lindley would be better suited to broker an agreement between the Israelis and Palestinians than he is throwing passes in the NFL.

Luckily, the suspension and most of the fine was overturned. I’m sorry, but fining a defensive back for a hard hit in a Steelers-Ravens game is like fining a herd for goring fleeing Spaniards in the running of the bulls. Caveat emptor.

Over/under $75.50: Amount ESPN will be able to charge for a 30-second ad for this Monday’s barn-burner between the Panthers and the Eagles

Settle in for an onslaught of cheaply self-made slanket commercials.

6/1: Odds that Andy Reid’s mustache actually decides it has seen enough and flees his face during what appears to be his final halftime speech this Monday night

Perhaps ESPN will be able to save the above fake proposition if they can promise they’ll capture the actual firing for the viewers. Sorry, Andy. The good news is I hear Sesame Street might be looking for a new Elmo.

1/5: Odds I get knocked out of my elimination pool this week

After somehow surviving that wretched Cowboys game last Sunday — thus picking a winner 11 straight weeks — I feel my luck has run out. Not to mention — in my pool — starting Week 12, you have to pick two teams to survive … a task I’ve NEVER been able to complete since the pool started. My choices: Denver and Tennessee. Translation: Bet the Chiefs and Jags money lines separately. There’s a winner in there for you somewhere.

Over/under 6½: Minutes into the second quarter of the Patriots-Jets game before my parents begin angrily tossing the word “schmuck” at each other at the Thanksgiving table

This is the first time my folks — who can’t stand each other — are spending Thanksgiving together in almost a decade. They have agreed to end the Cold War for the sake of the grandchildren. Cute gesture — but the trends dictate that at some point my dining room will resemble an episode of Maury, minus the paternity tests.

Continuing on with the family feuding theme — please check out a bit that aired on Jimmy Kimmel Live this week, featuring me, Jimmy, Jimmy’s dad, and my Aunt Chippy as we explore our family’s roots courtesy of Ancestry.com. Or at least watch the first 20 seconds, in which my Aunt Chippy unexpectedly falls hard on her padded ass, and then you may discontinue viewing. Yes — I promise we didn’t plan it. Sometimes the comedy gods work their magic for us.

That’s that. Enjoy Week 12 and have a Happy Thanksgiving!