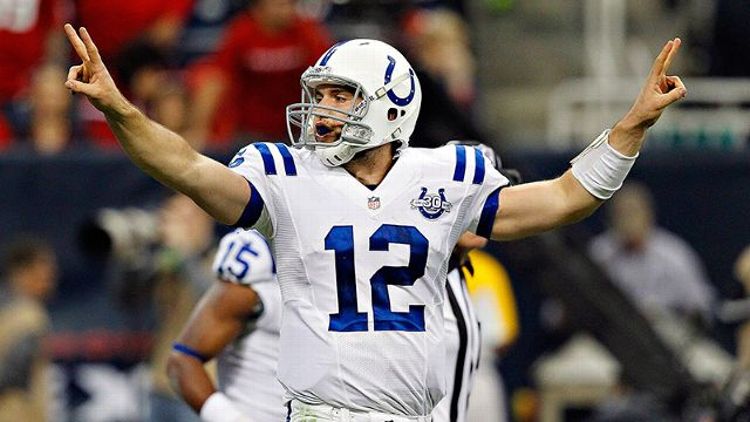 My sincerest apologies for Week 9. Let this be a lesson to everyone to never, ever underestimate Tampa Bay Bucs sixth-string running back Mike James again. James outran Chris Johnson by eight yards, costing me 70,000 jermajesties for my “most prolific rusher” play. (Would’ve paid 7/1.)

One more disgraceful week like that and I’m throwing my hat in the ring to run for mayor of Toronto.

Colts second half (+-?) over the Rams

In poker they call this blind bidding. You wager without seeing your hand. It’s an arrogant way to prove once and for all that you belong in the upper echelon of hopeless degenerate gamblers. In this case, I’m instructing you to bet the Colts in the second half without seeing the line or even knowing the game situation. Why? In their last six games, Indy has outscored its opponents 91-40 in the second half. I don’t know if the Colts players’ contract incentives are entirely based on second-half stats or if Coach Pagano shows some of his 2012 MRI results as inspiration, but in the last two quarters Indy is for real.

Note: The halftime bet is void if the Colts are up by 20-plus or if Andrew the Giant Luck mysteriously develops the bird flu in the game’s first 30 minutes. 10,000 jermajesties

Ravens to score over 21.5 points vs. Bengals

I’m throwing all my eggs in John Harbaugh’s jermajesty basket. Or something like that. This is about the time last season when the Ravens woke up and went on their title run. I don’t expect them to take us on the same storied journey but I do foresee some pep this Sunday. While they’re not generally seen as a dominant home team, Baltimore is 20-3 in its last 23 at M&T Bank Stadium. This is the second straight road game for Cincy, which is without its best defensive player, Geno Atkins, for the remainder of the year. This should be enough to allow Ray Rice to out-gain Joe Flacco on the ground. Special teams TD … excited crowd. You get it. Play the over. 25,000 jermajesties

Drew Brees throws for over 340.5 yards passing over Cowboys

Forget 340.5. This season Rivers, Stafford, and both Mannings (there would be three Mannings if Archie could sign with the Raiders before Thanksgiving) have thrown for over 400 yards against Old Man Kiffin’s sievelike secondary. I’m guessing a seven-time Pro Bowler and two-time Offensive Player of the Year will have no problem joining this semi-elite club. I’d feel a lot better about my Cowboys’ chances if the only healthy and competent member of the secondary, Brandon Carr, could cover Colston, Moore, Stills, Graham, Meachem, Toon, and Sproles all at once. Is that asking too much? 35,000 jermajesties

Titans -1.5 over Jags
Hope you enjoyed the week off, Jags. Now please hurry back to sucking so we can check off our weekly three-team teaser gimme.

Packers +9 over Eagles
Sorry, Chip Kelly. Not buying the juggernaut scoring machine routine from last week. The Eagles will put up points, but the big story will be the Packers’ rushing attack (averages 149 yards per game), which will be plenty enough to win this one or keep it close in Clay Matthews’s return.

49ers +3.5 over Panthers
Lots of talk about the Cam Newton Show, but the focus should be on this 49ers squad, which has scored 30 points in five straight games while giving up just six touchdowns in all of October. Not to mention, Aldon Smith spent the last month clearing his head in rehab just in time to crash helmets with angry 300-pound linemen. What a country!

35,157,000/1 odds that Rhode Island high school football player Randolph Zleh, who was involved in perhaps the play of the year, gets selected in the 2019 NFL draft

Not sure what the big deal is. Running the 63-yard dash in 32 seconds certainly isn’t gonna cut it in today’s National Football League.

Oh, and just in case you thought I was joking …

And just like that we forget about Cooper’s racist rant from a few months ago at a Kenny Chesney concert. All of a sudden he’s the Squeaky Clean Touchdown Machine.

In all seriousness — with regard to this Dolphins bullying fiasco — the guy I feel the worst for is quarterback Ryan Tannehill. The second-year QB has been sacked a league-high 35 times. And now his knucklehead teammates — the ones who are supposed to be protecting him — are no longer on the team. So as a result of some towel-snapping and racist message–leaving, Tannehill now has to get used to an inferior version of these two dopes. Of course, I’d feel a lot worse about Tannehill’s situation if he wasn’t married to this woman.

Over/under 97.5 minutes of sleep lost last night begrudging the last-second decision to stay away from a Vikings/Stanford money line parlay

Bill: Who do you like?
Sal: Tonight’s all about the college games. I like Stanford.
Bill: I kind of like the Vikings.
Sal: Let’s parlay both to win.
Bill: Sounds good. What does that pay?
Sal: Almost 9/1. Forget it — we’ll never win.
Bill: You’re right. It’s a good stay-away.

Over/under 7.5 years before the man who stun-gunned his wife to pay off a bet on the Packers-Bears game receives sex again from said wife

I just pray she films her Tasering retaliation during the makeup sex.

Let’s hope for the under to win in a big way. Unless maybe you’re from Houston.

@TheCousinSal Texans named Wade interim coach. How much booze should I buy for the next few weeks?

I’m assuming you’re a Texans fan? If so — I would just plan on camping out and watching your team’s remaining games on an iPad in the liquor section at Costco. (-145) over

@TheCousinSal I have you at Negative 55,000 Jermajestys for the week. This is the worst performance since Jeff Ross put on dancing shoes!

Over/under 1,855.5 miles that the sweet little girl who disobeyed the “TAKE ONE” sign in my trick-or-treat hidden-camera bit airing on Jimmy Kimmel Live ran before she felt safe enough to turn around

Based on this video — I’m petitioning the NFL to employ a new means to measure a player’s speed … simply by scaring the crap out of prospective players on Halloween and seeing how fast/far they can scurry away. We’ll call it the the Frightened 40. You’re up, Randolph Zleh.

That’s that. Enjoy Week 10. And please don’t forget to turn your clocks back again Saturday night.