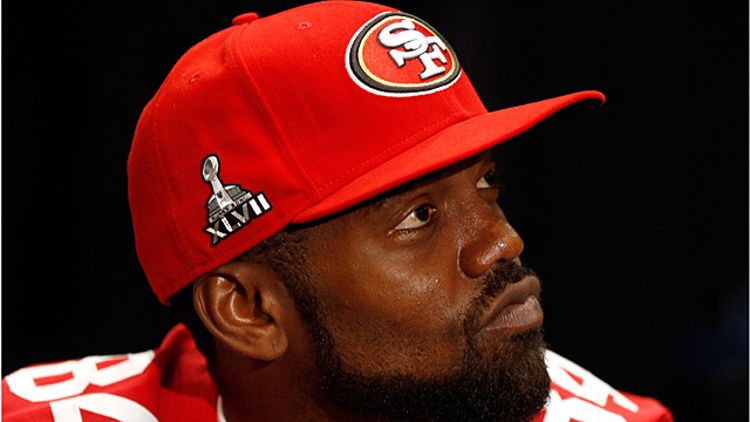 It’s here. Super Bowl XLVII. The biggest betting day of the year. Hundreds of propositions available to wager on. It’s very sad that my wife getting a Valentine’s Day gift is completely dependent upon what color Gatorade is poured on the winning Harbaugh’s head.

But I’m not too worried, as I’ve been on a Rain Man–esque gambling roll lately. I crushed my theoretical bookie on championship weekend, amassing 472,000 jermajesties* — taking my season-long total to a whopping (and I mean a short, pudgy Italian whopping) 612,500 jermajesties overall. Still a bit shy of our goal of 1 million jermajesties, but that’s what Super Bowl Sunday is for. Follow my lead and let’s go to Disney World together.

Against the Patriots, in the postseason, Pollard recorded 12 tackles last year and nine this year. Pollard has been held to two, four, five, and zero tackles in the postseason against all other opponents not wearing a Patriots jersey. I checked — the 49ers are wearing their traditional scarlet red, metallic gold, and white unis. Go under. 50,000 jermajesties

Moss took the opportunity at Media Day to declare that he is the greatest wide receiver of all time. That, of course, is debatable, but here’s one way you can tell for sure. If at any point in your career, Vegas has predicted you will catch fewer than three balls in one of the biggest games you’ve ever played in, you are not, in fact, the greatest ever. Greatest decoy? Maybe. 100,000 jermajesties

You can probably tell which way I’m leaning. Let’s face it: We’re long overdue for a crappy Super Bowl. And my presence at the venue skews the odds in favor of that even more. The 49ers are faster, younger, tougher, and will have 70 percent of the Superdome backing them. Worth a shot. 20,000 jermajesties each

Every Super Bowl I like to take an unknown player and put a substantial amount of jermajesties on or against him. Gary Russell and John Kuhn have made me eat Super Crow. But then last year Henry Hynoski (easily my favorite Giant of all time) came through with flying colors. This year the honor goes to 49ers fullback Bruce Miller. A couple years ago, the 49ers drafted the converted defensive end from Central Florida in the seventh round. Since then, he has been nothing short of unremarkable. Nonetheless, I am betting on him to catch a single pass on Sunday. Although he’s been shut out in the playoffs, Miller did haul in 10 passes over the last six regular-season weeks. Kaepernick is going to want to get the butterflies out with a quick, easy, high-percentage strike. That’s where Bruce Miller comes in. If everything goes according to plan, you’ll be able to cash in on this prop before you can say the word Tuiasosopo. In the meantime, please enjoy the Bruce Miller highlight reel. 200,000 jermajesties

This is the gimme of all gimmes. The guy works 40 miles from Baltimore and has named The Wire as his favorite TV show. The last thing he wants to do is let Omar down. 30,000 jermajesties

5/1: Odds Alicia Keys will be booed at any time during the singing of the national anthem

Believe it or not, we are still on the real, bettable props. As I mentioned earlier, I will be at the game this Sunday and have no reason to boo this woman — other than the fact that I’ll have money on whether Alicia Keys will get booed during the anthem. This megaphone is going to pay for itself. 10,000 jermajesties

This one is also real. When SportsBook.com foolishly put a line on this, my first thought was to throw this contest so that all my degenerate friends could open up online accounts and have some money to bet Super Bowl props with. But that’s no longer the case. Too much pride involved. I have the eye of the tiger-shrimp cocktail. You’re going down, House! And I’m backing these bold words with 1,000,000 jermajesties.

300/1: Odds that CBS will show a crowd cutaway of Emmanuel Lewis and Phil Simms will announce that Webster is Ray’s long lost brother

Now THAT would be the brother story we want to hear about. If Ray Lewis is right about this God guy, this particular fake prop will come to fruition.

Part of a settlement agreement he worked out with God’s true favorite — Tim Tebow.

150/1: Odds that during the game Ray Lewis is mistaken for a deer, shot by Ted Nugent’s long bow and processed as venison

I say over. That pregame show is going to be more like four hours of Old Lady Harbaugh poaching family pictures on Facebook.

Over/under 112.5: Times LL Cool J licks his lips in the many NCIS: Los Angeles promos that air during the Super Bowl

He’s clearly just holding out for a Chapstick endorsement.

Over/under 17 of them involve me, Joe House, or Tony Siragusa.

Which will be longer: Justin Tucker’s longest field or the look on Alex Smith’s face the entire game?

And now for my run of Alex Smith, poor jealous bastard, jokes …

Over under 2/3: Amount of salary spent by Alex Smith on Colin Kaepernick voodoo dolls in the French Quarter

30/1: Odds that, after the game, Alex Smith drags a drunken Colin Kaepernick to a tattoo parlor and tells the tattoo artist to give Colin a “That’s So Raven” tramp stamp on his lower back

75/1: Odds that, rather than shake hands after the game, the winning Harbaugh brother will give the losing brother a wedgie.

It’s amazing, in talking to New Orleans natives, to find out how much they despise this man. I actually read a history book at one of the local schools that blames him for Drew Brees’s weird birthmark.

17/1: Odds a Budweiser Clydesdale gets a concussion in a Super Bowl ad

If the replacement refs were still in charge this would for sure happen.

250/1: Odds that, after a lighting accident that takes out a female security guard, Alicia Keys actually screams the words “this girl is on fire”

Are you getting sick of these yet? Me, too.

Which will be longer on Sunday: total running time of Alicia Keys’s version of the national anthem or total time we see Lena Dunham’s boobs on the newest episode of Girls?

Don’t tell Chris Culliver, but I think I enjoy seeing Dunham’s on-screen boyfriend topless more than her? Speaking of …

He deserves it. He’s stupid.

75/1: Odds that Colin Kaepernick celebrates the Super Bowl win by getting a “chin hair patch” tattoo

There hasn’t been an odder placement of hair since the patch seen in the third fold of Honey Boo Boo’s mother’s neck.

Which will be higher: Points scored by 49ers or number of prostitutes at Charlie Sheen’s Super Bowl party?

12/1: Odds the remaining members of Destiny’s Child fight over a quarter during the coin flip

I have to say, making fun of poor women who are worth 10 times as much as you is oddly empowering.

Over/under 16.5: Too many fake prop jokes written for this column

I should’ve stopped with the waiters spitting in Goodell’s jambalaya. Lesson learned. That’s that. Enjoy the Super Bowl. And please tune in to Jimmy Kimmel Live this Monday night to see me give long, uncomfortable, unwanted hugs to losing fans outside the Superdome immediately following the game … provided I’m not erased from the Earth by Ray Lewis’s dejected relatives, in which case they probably won’t run the piece.

That’s that. Enjoy the game.