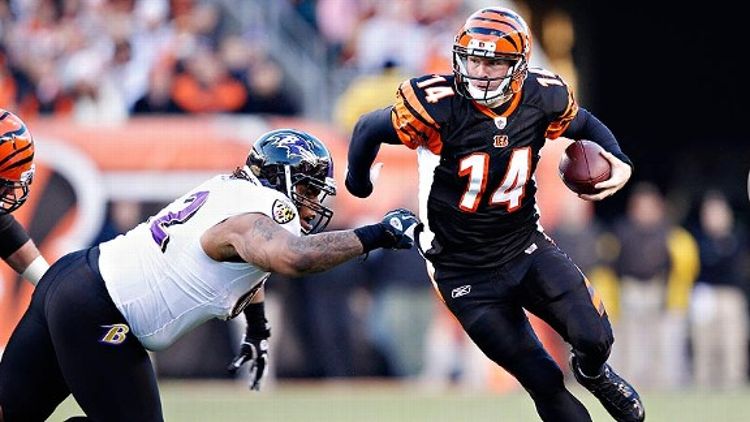 Happy New Year, everybody! Let’s see … where did we leave off? Oh yeah, you were humoring me by reading this weekly attempt at football humor and I was down an unspeakable amount of fake money betting NFL propositions. But like I said, it’s a new year and as the song tells us, old acquaintances should be forgotten. That’s why I’m bidding adieu to my old pal, Jermajesty Deficit … 325,750 jermajesties to be exact. I’m sure this will go over swimmingly with my bookie. Here are some rock-solid playoff props:

Bengals under 17.5 points vs. Texans (-110)
I adhere to very few theories when it comes to the postseason. One of my favorites, though, is the caveat about taking the under for points scored for redheaded rookie quarterbacks playing their first playoff game vs. a stingy defense in front of a hostile crowd on the road. So far, it’s never lost. (30,000 jermajesties)

Calvin Johnson will score a touchdown vs. the Saints (-155)
He might score two or three or four. The best part about this bet is it’s never done. The Lions will undoubtedly play this game from behind. Not even Oscar the Grouch benefits from garbage time as much as Megatron. (40,000 jermajesties)

Devery Henderson 12/1, Marques Colston 7/1 and Robert Meachem 12/1 to score the 1st touchdown vs. Lions
I swear to God, one of these years I’m going to hit this bet. (4,000 jermajesties each)

Incidentally, NO touchdown pays 10,000 to 1. Seriously, it does. Put a buck on it. I promise it will be the most exciting 2½ minutes of your life.

Falcons-Giants longest touchdown over 45.5 yards (-110)
The Falcons have Julio Jones. The Giants have that one guy who receives a 3-yard dink pass from Eli Manning and runs a marathon with it. The same guy who runs in circles downfield while Giants offensive linemen commit atrocious holds so Eli can conduct a spin class at the line of scrimmage and chuck the ball aimlessly downfield, completing the pass to said receiver in triple coverage. Yes — this diehard Cowboys fan is still bitter. (20,000 jermajesties)

Tim Tebow under 149.5 passing yards (-110)
Over 149.5 yards passing for Tim Tebow? Ahahahahaha! Ahahahaha! That’s hilarious! Maybe they meant 149.5 passing feet. This week John Elway told Tebow he should “pull the trigger more.” That’s interesting advice, but Elway should know that suicide is frowned upon in Tim’s religion. Unless the NFL announces at the last-minute that this game will be played as part of a triple-header … THIS … IS … A … MORTAL … LOCK. (70,000 jermajesties)

Lions/Saints passing yards vs. ounces of eye black Drew Brees uses to cover his birthmark in Saturday’s game
I put the number at approximately 1,237. Someday he’s going to make enough money to get that thing removed.

Over/under 75.5 compromising nude pictures of Chargers president Dean Spanos with Shamu the Whale that are in Norv Turner’s possession
Instead of upping his contract, the Chargers should have fired Turner and forced him to toss his Super Bowl ring in the Pacific Ocean. And that goes for any coach who allows Tim Tebow to steal the AFC West.

Over/under 19.5 facelifts from now before Jerry Jones agrees to follow the lead of the other 31 owners in the league and hire a GM (Yes– even STILL bitter)
In all honesty, I feel for Jerry. After losing bin Laden, Gaddafi and Kim Jong-il in 2011 this dictator has to think his number is up soon. Oh — and I forgot Andy Rooney.

7/1 odds Aaron Rodgers suffocates Matt Flynn by smothering him with a cheesehead in his sleep for having a career day and possibly c%*$-blocking the former from winning the MVP award
This week on the BS Report, I said that they should make a one-time exception and allow the NFC Championship winner decide the MVP. And if for some bizarre reason it doesn’t end up Saints/Packers, just give it to the guy who DIDN’T throw two or more interceptions in five games: Aaron Rodgers.

Snooki/Deena will hook up with over 32.5 juice-head gorillas on this season’s Jersey Shore
It’s T-shirt time and I’m betting the over. This year GTL + DTF = multiple STDs. I’m as excited for tonight’s premiere as a 40-year-old man with no life can possibly can be.

Don’t even get Nessler started on how East Virginia was screwed by the BCS.

That’s that. Enjoy the Wild Card round.