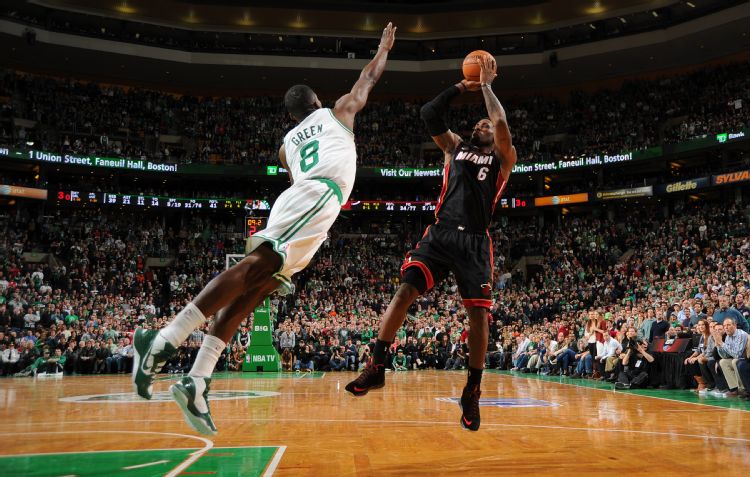 As spatial analytics slowly creeps its way into the NBA, we’re beginning to evaluate performances and tendencies in new ways. Perhaps the most basic illustration of the virtue of spatial approaches applies to shooting. Although field goal percentage is concise and simple, and, as a result, has made its way into the parlance of basketball fans everywhere, it can also be a misleading judge of shooting ability; generally speaking, FG percentage ignores space and the basic basketball tenet: Some shots are easier than others. Layups are easier than half-court heaves, and players who thrive exclusively close to the basket are always the league leaders in FG percentage. Consider the top five all-time career leaders in FG percentage: Tyson Chandler, Shaq, Artis Gilmore, Mark West, and Dwight Howard. Now these guys are obviously incredible scorers, but are they great shooters?

One simple way to evaluate shooting in the NBA is to examine FG percentage in different court spaces. As of January 22, the NBA had made 44.7 percent of its 100,607 shots, but its shooting efficiency varies considerably depending on space: 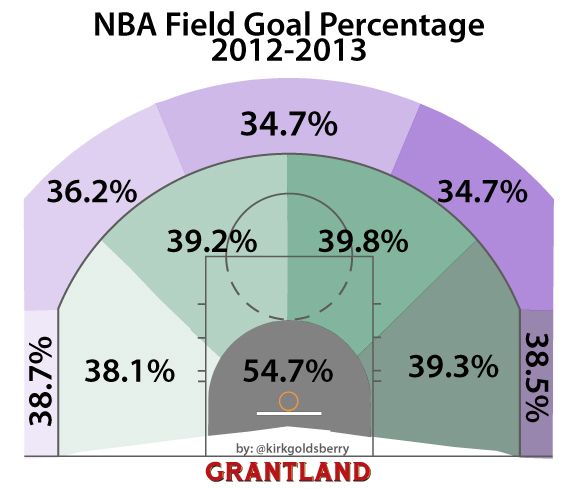 Although the league as a whole shoots 44.7 percent from the field, only one of the 10 areas on the court exceeds that efficiency. As a whole, the league shoots 54.7 percent in the close-range area within about 7.5 feet of the basket. The league also shoots the lion’s share of its shots in this zone: 41.6 percent of NBA shots occur within this area. Outside of this area, NBA shooting is a sub-40 percent proposition.

One reason the great Tyson Chandler again leads the league in FG percentage is that he’s extremely effective near the basket. He shoots an incredible 69 percent in the close-range area. Another reason, though, is that this is the only area he’s active in; he’s not a jump shooter: 248 of his 262 (95 percent) total shot attempts have come close to the basket. This kind of spatially limited shooting behavior is a common trait among dominant FG percentage guys. However, Chandler’s 69 percent FG percentage close to the basket is not the best in the NBA. Out of the 164 players with at least 100 attempts in the close-range zone, Chandler ranks third in efficiency — which is still amazing — but more amazing is that LeBron James shoots 72 percent down there. As of January 22, he had made 230 of his 318 close-range attempts, providing just another bit of evidence of just how great James has become: LeBron is outpacing Chandler in terms of both frequency and efficiency near the basket.

So if LeBron is better than Chandler near the rim, why doesn’t James lead the league in FG percentage? Well, because he’s also a very active jump shooter; this diminishes his overall shooting percentage and Chandler benefits by default. Although LeBron has become an above-average shooter from both the midrange and behind the arc, his activity in these areas costs him in terms of overall FG percentage — not that he cares, but this phenomenon provides a great illustration of the limitations of conventional FG percentage evaluations. Further, when we examine who leads the league in FG percentage from different court locations, we start to see very different types of player enter the discussion.

Who are the best shooters in the league so far this season? When you partition the court into different sections, you can evaluate shooting in interesting new ways. Halfway through the season, the samples are just large enough to begin to do this reliably. 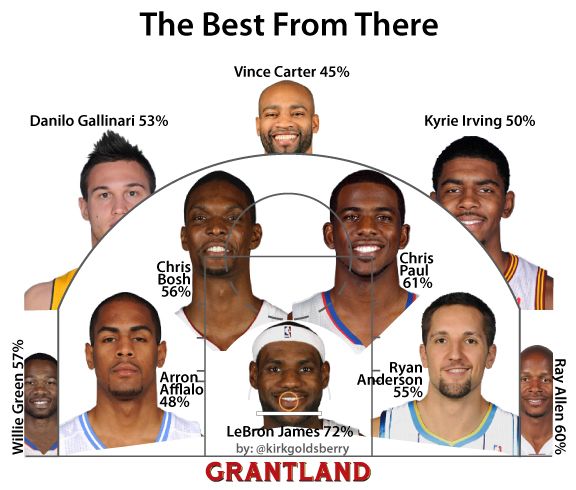 Midrange shots remain the least efficient scoring options in the NBA. They go in less than 40 percent of the time, and they’re only worth two points. Plus, the rebounding rates from missed midrange shots are among the lowest of any spots on the floor. Regardless, the league still shoots over one-third of its shots from the midrange, so players who can score efficiently in the midrange are extremely valuable. With this in mind, in the four midrange zones above, the NBA’s best midrange shooters so far are Arron Afflalo, Chris Bosh, Chris Paul, and Ryan Anderson. Bosh is having a great shooting year thus far, making just under 50 percent of his midrange shots. But in particular, he thrives near that left elbow, giving the Heat a potent midrange option to go with LeBron and their army of 3-point monsters.

Chris Paul is still the best point guard in the NBA. One reason is that he’s a very good midrange shooter. He’s the most efficient scorer in the league from that epicenter of pick-and-roll action near the right elbow. His ability to knock down shots from here keeps defenses honest and opens up more opportunities elsewhere on the court.

Behind the arc, Ray Allen from the left corner remains the most potent player-spot combination in the NBA. Allen’s shooting an incredible 60 percent from the left corner this season, up from a measly 57 percent last season. Aside from that, with all due respect to CP3, we’re also reminded that Kyrie Irving may soon be the best point guard in the NBA. Not only does he have a ridiculous handle, but the masked man can also shoot, especially from his left. For a player his age, this is a devastating combination. With only marginal improvements to his jump shot and his free throw shooting, Irving could be a 50/40/90 guy by the time he’s 23.

In the end, this graphic reveals that the Miami Heat are well-positioned for the chess games that are the NBA playoffs. In LeBron, they have the King James of the close range; in Ray, they have a deadly rook from the left corner; and in Bosh, they have a knight who can kill you in between. This trio, along with Dwyane Wade, presents a terrifying foursome of scoring. Not simply just because they’re each great scorers, but also because each thrives in different spaces.