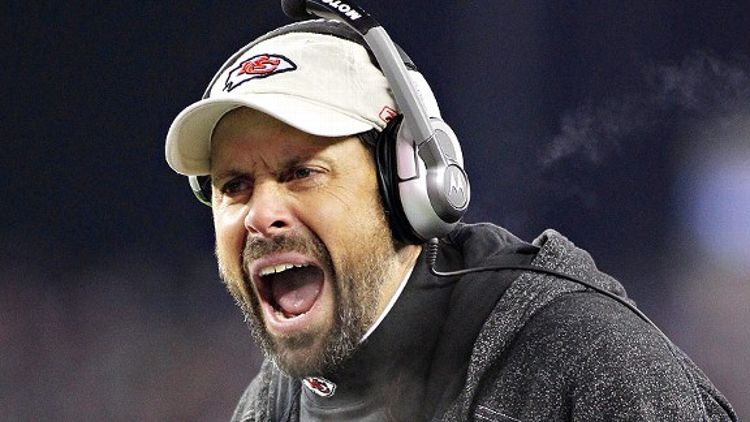 In one way, it’s easy to see why the Chiefs and Dolphins fired their head coaches on Monday. Hefty losses in Week 14 served as the final straw in each case, as the two teams lost by a combined 43 points on Sunday. Both Kansas City’s Todd Haley and Miami’s Tony Sparano were likely to receive the boot out of their roles after the season ended, so their Monday morning dismissal merely put them out of their misery a few weeks before expected.

On the other hand, making the decision to fire Haley and Sparano on Monday makes absolutely no sense whatsoever. Haley’s team is riddled with injuries and has one of the least-pedigreed quarterbacks in recent memory under center. Sparano’s team isn’t even playing all that poorly, having won four out of five before losing at home to the Eagles on Sunday. Even if their players are freshly motivated by the decision to fire the head coach, they’re being replaced by interim coaches who have a history of failure (Romeo Crennel in Kansas City) or no head coaching experience to speak of (Todd Bowles in Miami). Neither Crennel nor Bowles have a prayer of retaining their jobs into 2012, so why would players care about playing hard for them over the final three games of the season? It’s a pair of speciously-timed decisions, and the only logical reason why the moves were made right now is to help solidify the positions of each team’s general manager.

For Sparano, the long-rumored end finally came a day after Dolphins beat writer Armando Salguero said that the organization had decided to fire Sparano at the end of the season. It represented the latest leak out of an organization which has spent the last 12 months treating Sparano like their safety school during the college application process. After the 2010 season, Miami owner Stephen Ross flew out to California and flirted with Jim Harbaugh while Sparano was still employed as the team’s head coach. After Harbaugh spurned their advances, they tried to interview Eric Mangini for a “consulting” role before cancelling the meeting. Next, they scheduled and then cancelled a press conference that was to announce Sparano’s retention as the team’s head coach. And then finally, with their bridges burnt, the Dolphins gave Sparano a contract extension through 2013 to prove just how committed they were to retaining the boss they clearly had no interest in holding onto.

Once the Dolphins started their season 0-7, it was clear that Sparano’s tenure with the team wasn’t going to last beyond 2011. So why didn’t the team fire him then? Why let him go after he’s helped steady the ship? The organizational braintrust of general manager Jeff Ireland and owner Stephen Ross, which has presided over the same failing teams that Sparano stood on the sidelines and coached, came out on Monday and said that they were looking for a new Don Shula. That means they want a hot young coordinator with leadership ability, which is a problem, because that’s just about what every single team in the league looks for after they fire their coach. And nobody who fits that bill is going to be able to interview for the Dolphins job until January, anyway, so why fire Sparano now?

The logical answer is that it changes the narrative surrounding the Dolphins over the final few weeks of the year. Think about it from Ireland’s perspective. According to Salguero, Ireland and Sparano have sparred over decisions ever since Ireland flew out to California with Ross to interview Harbaugh. Remember, Ireland came to the team with Sparano and Bill Parcells in 2008, and now, he’s the only one left standing. By aligning himself with Ross and willingly abandoning the head coach he helped choose, Ireland’s made himself essential to the one guy the organization can’t fire. If Ireland lets Sparano stick around through the end of the season, the question surrounding the team remains, “Do the Dolphins need to blow things up and start over?” Now, by firing Sparano, Ireland has turned the question into: “Who will Miami hire as their new head coach?” He’s successfully deflected the concerns away from the questionable decisions he was involved with, like selecting Chad Henne as the team’s franchise quarterback or trading a pair of second-round picks for Brandon Marshall. And if the team does go after a young coordinator, it ensures that the organization won’t be shopping in the star coaches aisle, where Super Bowl winners like Bill Cowher or Jon Gruden would come in and take over control of the team’s personnel department, eliminating Ireland’s raison d’etre in the process.

That same narrative is true in Kansas City, where general manager Scott Pioli pushed Haley out only ten months after the Chiefs shockingly won the AFC West. On Twitter, Yahoo! writer Charles Robinson detailed the split between Pioli and Haley as a relationship that had been in the process of breaking down since Pioli selected low-ceiling defensive end Tyson Jackson with the third overall pick in the 2009 draft against Haley’s wishes. Jackson’s failed to even hit that ceiling in the three years since his selection.

Pioli also went out of his way to trade for Patriots quarterback Matt Cassel , and then gave Cassel a lucrative contract extension before the quarterback ever took a single snap as a Chiefs player. Of the 23 quarterbacks who have thrown 1000 passes or more from 2009 through 2011, Cassel is next-to-last in completion percentage (57.2 percent) and last in yards per attempt (6.4). Like Ireland in Miami, Pioli chose the wrong franchise quarterback and has fired his coach for not producing enough with him under center. Ironically, Robinson noted that Haley deserved a lot of the credit for whatever development Cassel’s made during his time in Kansas City, pointing out that deposed offensive coordinator Charlie Weis gave up on Cassel during Weis’s lone season with the team in 2010 and forced Haley to develop the struggling quarterback himself.

Unlike Sparano in Miami, though, there was reason to believe that Haley needed to go. Few coaches in recent memory have been weirder than Haley, who established a steady record of antagonizing the players and coaches around him during his tenure as head coach. In Haley’s three years with the team, he retained the same coordinator exactly once (Crennel in 2010-11). Haley inherited a team whose most promising players were wide receiver Dwayne Bowe and linebacker Derrick Johnson. He promptly benched them both, demoting Bowe to the third string during training camp before eventually restoring him to the starting lineup. Johnson played in a reserve role for the entire 2009 season before returning as a star during the triumphant 2010 campaign. Haley later started Kevin Curtis in a playoff game just six days after signing him off the street. What other coach besides Bill Belichick would do that?

Furthermore, he was a weird mix of contradictions. The offense he constructed was conservative to a fault on third down, but only the Saints went for it more frequently on fourth down last season. He was progressive enough to noticeably limit Jamaal Charles’s workload during the running back’s breakout 2010 campaign, but conservative enough to give limited veteran Thomas Jones 15 more carries than Charles, including many of them in short-yardage or goal-line situations, despite a lack of evidence pointing to Jones’s success in those roles. He ran an old-school team and was regarded as a disciplinarian, but he basically grew a homeless man’s beard. Would you trust anyone in a position of authority with unexpected facial hair? Didn’t think so. A year ago, Kansas City’s winning record would have seen all these qualities painted as Haley’s features; now, they’re bugs.

In the end, while Haley and Sparano might have had their faults, the biggest reason they fell came down to their team’s inability to identify a franchise quarterback, develop him, and keep him healthy through this 2011 season. An effective season from Cassel would have kept the Chiefs around .500 and prevented the organization from firing Haley, even as his generally prickish nature offended those around him. And growth from Henne would have allowed Sparano to see out the final year of his deal and, perhaps, oversee the growth of a young, championship-caliber defense that could have helped him win the AFC and keep his job. Instead, Haley and Sparano are both out of a job this Tuesday, and while they were imperfect, it’s not clear that they were really the problem at all.

Passing Around the Blame in Dallas
Can Tim Tebow Keep It Up?
Michael Vick Questions The Laws Of Energy

About Last Night: Seahawks Livin' On A Prayer