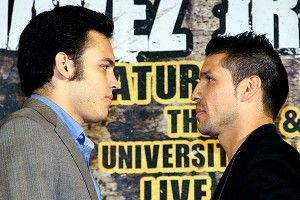 Much of boxing’s appeal comes from its simplicity. Never mind the handful of rules that aren’t inherently obvious to the first-time observer, the scoring system that is so open to interpretation as to be closed to explanation, and the myriad strategic complexities. At its core, boxing is two guys punching each other. It is the sport that everybody understands.

As such, a boxing match is often easiest to promote when there is simplicity to the hook. You don’t want it to take more than 30 seconds to explain the plotlines. You want opponents who openly despise each other (or are willing to pretend to), you want a fight where a legitimate championship or a meaningful pound-for-pound ranking is at stake, and, if possible, you want adherence to Storytelling 101 with a hero on one side and a villain on the other.

Ultimately, it’s raw star power that determines what the number on the far left of a fighter’s paycheck will be. But all of the numbers right of that will vary depending upon how marketable the matchup is.

Sergio Martinez vs. Julio Cesar Chavez Jr. is turning out to be a promotional dream. It starts with the burgeoning star power of Chavez, which, combined with his heritage and the fact that this is Mexico’s Independence Day weekend, has already secured a sold-out crowd of 19,186 at the Thomas & Mack Center in Las Vegas for Saturday. But it goes beyond that. Whether the enmity between Martinez and Chavez is real or staged, it came through spectacularly in the two-way trash talk of HBO’s Face Off program and throughout the rest of their media engagements. There is a true championship at stake, as Martinez is the legitimate middleweight champion, the man who beat the man who beat the man who beat the man who unified all of the belts. And based on the evidence presented on the second and final episode of 24/7 last week, we have our hero and our villain. Chavez’s fans are descending upon Vegas to see if he can follow in his father’s footsteps and become the true champion of the world. Everyone else will be tuning in to see the spoiled brat portrayed on HBO’s sales-vehicle-slash-documentary-series get his ass kicked.

It’s a fascinating and rare dynamic: The villain to most of the nationalistically neutral viewers at home will have the full support of the live crowd. On closer inspection, that’s not quite the most simplistic marketing hook of all time. But the bottom line is that everyone has somebody to root for and somebody to root against.

So what makes Chavez the bad guy?

It’s not that Junior came off as a malicious evildoer. Rather, he came off as boxing’s answer to Billy Madison. It’s unclear whether he cares more about the Martinez fight or Nudie Magazine Day.

There are all different levels of villainous behavior, and certainly Chavez’s childish entitlement doesn’t press anywhere near as many buttons as Floyd Mayweather’s egomaniacal excess or Antonio Margarito’s unapologetic glove-loading. But what they have in common is that they’ve all made for tremendous 24/7 characters. If you want to drive interest and inflate PPV sales, it sure helps to have a bad guy. “Villain” and “vanilla” are just one letter away from being an anagram, but nobody counting PPV receipts will ever get the words confused. Look at the 2.4 million buys for black hat Mayweather vs. white hat Oscar De La Hoya, far above expectations. Then look at the 225,000 buys for gray hat Joe Calzaghe vs. gray hat Roy Jones, less than half of what distributors were projecting.

It sure feels like Martinez vs. Chavez is going to go the exceeding-expectations route when the numbers come in. There’s no Mayweather or Pacquiao fight within a couple of months in either direction to deplete the boxing consumer’s budget. Thanks to newcomers like Gennady Golovkin and Daniel Geale, the middleweight division is heating up. After a slow summer, boxing as a whole is riding some positive momentum off of last weekend’s Andre Ward breakthrough, the outstanding Lucas Matthysse–Ajose Olusegun fight, and the unexpected Tomasz Adamek–Travis Walker heavyweight gem. Martinez would have been favored 10-1 a year ago, but now it’s just 2-1 in Vegas and getting closer as the Chavez money pours in.

It’s simply as perfectly timed, perfectly marketed a boxing match as you can have in the current climate without Mayweather or Pacquiao’s name attached. Throw in a punk kid with a penchant for petulance, and that pay-per-view upside for Martinez and Chavez should more than cover the cost of having each other go upside their heads.