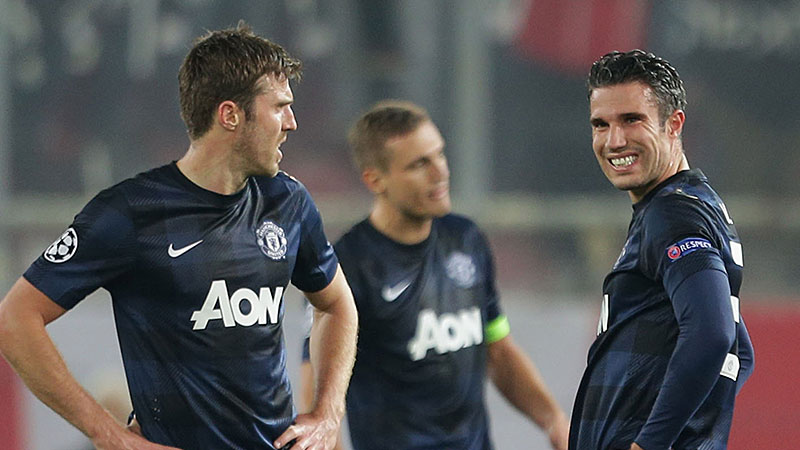 Mike L. Goodman: Some things in football are just cruel jokes. In an opening round filled with one-sided matchups that resulted in uncompetitive games, perhaps the least watchable of all was Manchester United vs. Olympiakos. It was also the only game that had a truly surprising result. That United lost 2-0 to Olympiakos is comical. It’s beyond comical. It would have been merely comical if Southampton or Newcastle had traveled to Greece and lost to Olympiakos. It’s not only that Olympiakos are bad, which they really, really are, it’s also that they play in a league in which they are, by far, the best team around. Olympiakos lead the Greek Super League by 20 points. They also sold their best player to Fulham (Fulham!) in January. That’s the team United lost to by two goals.

It’d be one thing if United dominated but gave up a couple of fluky goals. That would fit nicely into the team’s story line this year. Bad chances, lots of crosses, arguably played better, still couldn’t win. But that’s not what happened at all. Olympiakos outplayed United. They outshot United 12-7. They got four shots on target to United’s one. And while the Greek side let themselves be outpassed by United, 480-287, most of that possession was in areas that didn’t threaten Olympiakos in the slightest. United’s passing chalkboard thins out faster than Wayne Rooney’s old hairline as it approaches Olympiakos’s penalty area. 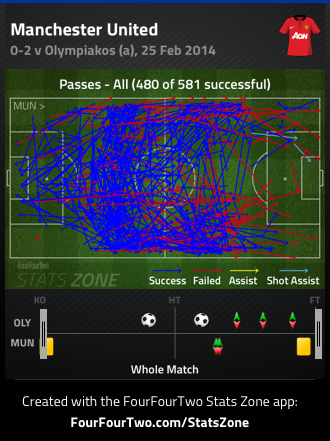 In an incredibly down year for United, David Moyes caught a ridiculously good break by drawing Olympiakos in the Champions League. While it’s hard to imagine they ever could have progressed further than the quarter finals, a short Champions League run would have at least cushioned the blow of the horrible domestic season. Instead, United and Moyes have hit new lows in a season of new lows. After losing to Olympiacos, it’s worth wondering exactly how many more there are left to hit, and how many of those Moyes will get to stay around for.

Announcing Their Presence With Authority 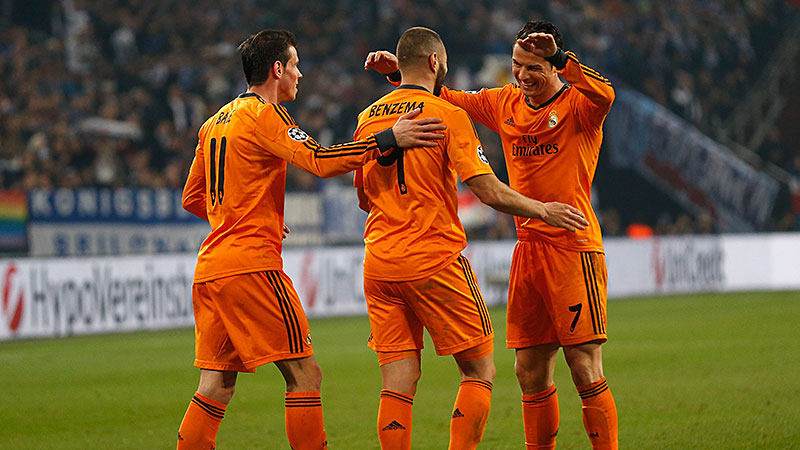 Spike Friedman: Real Madrid’s 6-1 demolition of Schalke 04 was not a tactical struggle. It was an exhibition of one team’s plan A being utterly unstoppable. Schalke had no answer for any of Madrid’s three forwards — Gareth Bale, Cristiano Ronaldo, and Karim Benzema — and all three left the match with a brace. While Bale’s first goal was truly sublime, and Ronaldo put himself in position to easily score as many as four, in a stunning performance, during which he completed 7/8 take-ons, it was Benzema’s performance that stood out among the trio.

By shipping out Gonzalo Higuain to Napoli, Carlo Ancelotti was effectively doubling down on the French striker. Higuain is the tidier finisher of the two strikers who split time last season, having posted higher conversion rates than Benzema in their time at Madrid. And with Bale incoming, keeping Higuain would have been the safe choice; flank a poacher with Ronaldo and Bale and watch the goals roll in. However, Benzema is the more complete player and the more intelligent passer, and his combination play stood out on Wednesday. In addition to his two goals, Benzema also tallied two assists, four chances created, 20/20 passing in the final third, and 33/33 passing overall. He also tallied four ball recoveries including this one, which led directly to Bale’s wonder goal.

Benzema’s complete performance was Madrid’s best on a day when everything was working for a team that suddenly looks like the tournament’s cofavorite. Actually, wait a second, Cristiano has something to say about that assessment:

Night of the Hunter 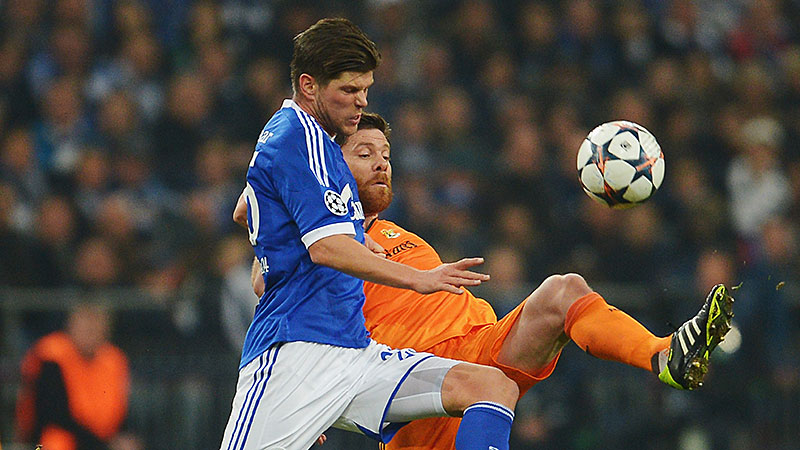 Friedman: I spent a decent chunk of time in Holland in the run-up to the 2010 World Cup and found myself shocked by the passion people felt toward Klaas-Jan Huntelaar. He was the rare star to have spent significant time with two of the three biggest sides in Holland (Ajax and PSV), and had paired with Luis Suarez the year prior to dominate the league. Check out this sweet ad starring the Huntelaar and current Norwich striker Ricky van Wolfswinkel. (Note: Dutch fans did not seem to have strong opinions about van Wolfswinkel.)

Then check out this sweet consolation goal Huntelaar volleyed in to make Schalke’s loss to Madrid ever so slightly less shameful.

Huntelaar was injured for Holland’s World Cup final run, and after a lackluster tenure at Real Madrid, his star has somewhat waned. That said, his legacy as one of the most prolific young strikers in Eredivisie history remains intact, and the Hunter is still capable of conjuring jaw-dropping strikes at any time. Even if that time is the 90th minute, down six goals to his former squad. 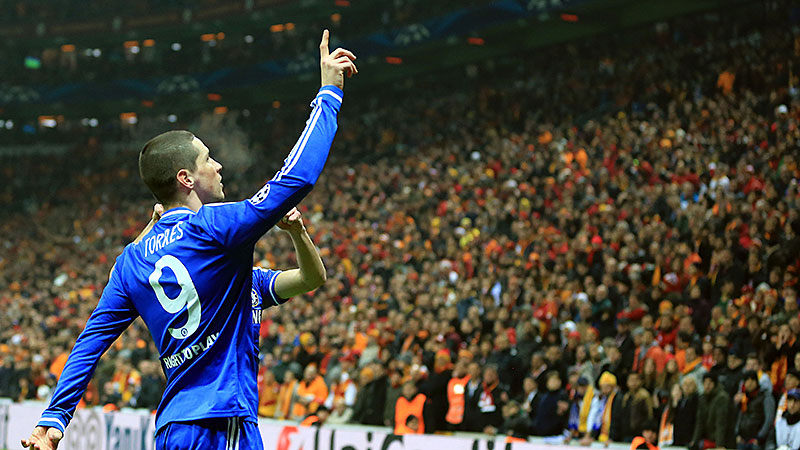 Goodman: The only truly competitive match during the first leg of the round of 16 happened in Turkey. As is not unusual, Galatasaray proved just good enough at home to not let a “bigger” European side come in and do what they wanted. (Just ask Juventus, who are now plying their wares in the Europa League.) It’s a testament to how well Galatasaray is built that their combination of expensive, veteran, imported talent and homegrown players continues to keep them competitive, year after year. But it’s hard to imagine them traveling to Stamford Bridge and getting a result. After all, nobody travels to Stamford Bridge and gets a result.

Which is kind of the point for Chelsea, on one level. After going up a goal early on a typically fast and precise Chelsea move, finished at least somewhat atypically by Fernando Torres, Chelsea settled into a morass.

The counterattacks didn’t quite come off. They weren’t quite as clinical shutting down the midfield as they usually are, Eden Hazard struggled to dominate the game as thoroughly as he has in recent weeks, and Galatasaray’s equalizer, when it came from a corner, wasn’t particularly surprising, following shortly after they rattled the post.

It was an underwhelming performance from Chelsea. It was also a performance that ended up giving them exactly what they needed: an away goal, and an opponent that has to play to win, at Stamford Bridge, to advance. That’s been the story of Chelsea year this year. They’ve been fantastic, but they’ve never really stood out. It always seems like they leave their opponents hanging around, that they rarely put in what you could consider a truly commanding, comfortable performance — but at the end of the day, Chelsea are leading the Premier League, and in great position to advance to the quarterfinals of the Champions League.

NBA Shootaround: To Cav and Cav Not

What's the Matter With the NHL Trade Market?