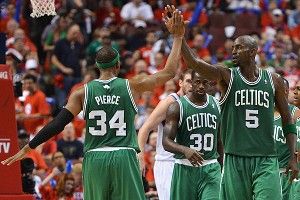 After splitting a couple of one-point games to open their series with the 76ers, the Boston Celtics emphatically won Game 3 in Philadelphia on Wednesday night by shooting 52 percent from the field while holding the Sixers to just 41 percent shooting. Since there was a mini Storage Wars marathon on A&E on Wednesday night, your plan was probably to watch that for a little bit before checking out the second half. But because the game was pretty much over at halftime, chances are you immediately flipped back to A&E for the remainder of the night. And when you woke up this morning, I’m guessing you regretted your decision and have spent all day wondering what happened with last night’s game. Well, luckily for you, I watched the entire thing and made notes on everything you missed. Here are my four observations.

Dick Stockton and Chris Webber are surprisingly great together.
My guess is that the only things Stockton and Webber have in common are a fierce loyalty to their respective barber shops and an irrational love for Golden Corral, yet they somehow have solid chemistry. Stockton has always been great at what he does and has been broadcasting for so long that I’m sure he could call a game with Ozzy Osbourne and make it sound good, so I guess the big surprise here is how good Webber was. Now, I know that Webber has been broadcasting for TNT for a while now, but I’ve never really paid attention because I’ve always been one to put NBA games on in the background while I screw around on the Internet. But as it turns out, all it took was paying the slightest bit of attention to realize he’s smart, funny, observant, and calls it like he sees it. I’ve always known that Webber is a charismatic guy, so this isn’t a complete shock. At the same time, though, we’re talking about a guy who chose to attend Michigan for his higher education, is responsible for the most famous mental lapse in college basketball history, was the central figure in the Michigan basketball scandal that set its program back 10 years, let Tyra Banks go when she was in her prime, and had a contract with a shoe company that made shoes for Latrell Sprewell with “spinners” in them. So yeah, I think my doubts were justified.

The Celtics still got it.
Anyone who so much as checked Wednesday’s box score can see that when everything is clicking for Boston, they are still one of the best teams in the league. From the second quarter on, the Celtics dominated every facet of the game, including offense and defense, which many experts consider to be the two most important facets. There was a lot of discussion throughout the broadcast about how the Celtics are aware that they’re getting old and their window of opportunity is closing because of it, and it’s hard not to think that that played a big role in their dominating win. It was as if they took the 76ers lightly in the first two games of the series, and after the Sixers stole Game 2 in Boston, they decided to stop messing around in Game 3. Boston is a better team than Philadelphia and shouldn’t have too much of a problem advancing, but the big question moving forward for them will be whether they can access the fountain of youth on a consistent enough basis to go toe-to-toe with the NBA’s elite. Either way, on Wednesday, they showed that they are obviously Toby Keith fans because they put a boot in Philly’s ass and proved that while they might not be as good as they once were, they’re certainly as good once as they ever were.

Searching “[athlete’s name] looks like” on Twitter is becoming my new favorite pastime.
When Mike Conley was trending on Twitter during a first-round Grizzlies-Clippers game, I noticed there seemed to be just as many tweets discussing what he looked like as there were about how well he was playing. I then spent the next half hour laughing to myself as I scrolled through tweets that said he looks like “the dog part of Catdog” or that “he has a twin brother and they wear a lot of turtlenecks.” I’ve searched Twitter every game I’ve watched since. I tracked Kevin Garnett tweets Wednesday night, and as you can imagine, the results were pretty awesome. Here are my favorites:

And my personal favorite …

Kevin Garnett looks like he owns a few swords.

I never realized that Evan “The Villain” Turner’s tattoo isn’t visible during games.
I shared a locker room with The Villain for three years at Ohio State, and while I wasn’t exactly fond of his terrible taste in music, his inability to pick up after himself, or his propensity to walk around naked as often as possible, it was all worth putting up with because nothing brought me greater joy than laughing every day at the Sonic the Hedgehog tattoo he has by his heart. I vividly remember the January day in 2009 when he showed up to practice with it for the first time. Like everyone else in the locker room, I noticed the tattoo immediately. But unlike everyone else in the locker room, I was a notorious antagonist and therefore had no choice but to speak up.

I asked, “Evan, do you realize that you have what appears to be a tattoo by your nipple?”

“Of course it is. How long do you plan on keeping that?”

“Well, being the creepy perv that you are, it’s obvious that you went to Chuck E. Cheese’s last night and while you were there you stole some temporary tattoos from a Sonic-themed birthday party.”

“Come on, bro. I’m hardcore. You know that. This shit is realer than Real Deal Holyfield.”

“You mean to tell me that you got a permanent tattoo of Sonic the Hedgehog on your chest?”

“Hell yeah. It represents what I’m about — I’m too fast to be contained and I’m on a mission to collect rings. And I always got the foxes by my side, if you know what I’m saying.”

So yeah, The Villain has a Sonic tattoo by his heart that he’s really proud of.

Anyway, since the practice jerseys at Ohio State were really loose every year, his tattoo was always visible during practices, and I assume it was visible during the games too. (I never paid attention to our games because I was too busy checking out the babes in the crowd.) Wednesday night, though, I realized that his NBA jersey fits much tighter and as a result his tattoo — which would surely be the most embarrassing one in the league now that Kenyon Martin had the lips on his neck covered up — unfortunately isn’t exposed.

(OK, so I made up everything you just read and as far as I know, The Villain doesn’t have any tattoos. But that shouldn’t get in the way of you telling everyone you know that he has a Sonic tattoo on his left boob.)