Can the Sixers’ Middle-Class Dream Be Saved? 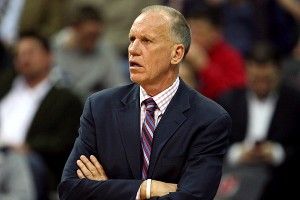 Tuesday night, in a boring game few people watched in person or on television, the 76ers battered the Nets by 19 points. With minimal coordination, both teams could have left the arena at halftime and enjoyed Skinnygirl margaritas in the Prudential Center parking lot while the first half was rebroadcast on the YES Network. At any rate, once the Sixers amassed a double-digit lead, the Nets concluded it made more sense to gather Ping-Pong balls in the Anthony Davis sweepstakes than to muster resistance. Happily, Kris Humphries, dissed by Kanye West on the recent track “Theraflu,” showed no ill effects.

For Philly, the bland affair was also a crucial victory. Mired in a perplexing and ill-timed slump, the team that led the Atlantic Division all season is now in the undignified position of clawing to preserve their playoff perch. After a 20-9 start, the Sixers have won only 10 of their last 26 games. Even after last night’s triumph over the Nets, they trail the Celtics by three games and are destined to scrounge for the unenviable seventh and eighth seeds with New York and Milwaukee.

How did the NBA’s feel-good story grind to such a dismal ending? For the Sixers, it’s unraveling like Flowers for Algernon: The brain-awakening surgery performed by coach Doug Collins has lost its effectiveness and the team is slowly returning to its initial stupor. Reports from Philly paint a portrait of a club in free-fall, with players revolting against Collins’s pedantic hectoring and accusing each other of selfishness. It’s a remarkable descent into chaos for a team previously hailed for embracing egoless, disciplined basketball.

A few months back, we marveled at the Sixers’ egalitarian approach. It existed as a Trotskyite alternative to the regimes installed in Miami, Los Angeles, or Oklahoma City, where small cadres of superstars monopolize the basketball and leave the peasants scraping for moldy crusts. But in Philly, merry workers whistled “L’Internationale” while industriously erecting a giant stone bust of Dear Leader Doug Collins. Even now, statistical abnormalities are evidence of their cooperative zeal: The Sixers’ leading scorer comes off the bench, their All-Star scores only 12 points a game, and they have the best turnover percentage in NBA history (or at least since the stat was first tracked in 1977).

At the beginning of this lockout-perverted season, the Sixers’ combination of depth, youthfulness, and continuity was stunningly effective. Without training camp, teams combining unfamiliar parts had trouble discovering which sprockets could be coaxed into which thingamajigs. Elsewhere, squads populated by veterans lumbered from the gate as if wearing jowly Betty Draper fat suits. Dirk Nowitzki, all by himself, sweat out several celebratory jeroboams of Armand de Brignac during the first third of the season. Now, down the stretch run, elite teams like the Thunder and Spurs are purring along, preparing for deep playoff drives. Philly is crumbling.

The Sixers have particularly struggled in close games, winning only a quarter of those decided by single digits. Cliches about the necessity of having a crunch-time “go-to guy” are a sliver’s width from “will to win” psycho-garble, but there’s truth to it here. The Sixers simply don’t have anyone good enough to score efficiently or set up teammates for easy buckets. Lou Williams is 14th in the league in points/48 minutes of clutch time (as defined by 82games.com) but shoots 35 percent in such circumstances. Iguodala? He shoots 25 percent.

Still gun-shy from the Iverson era, the Sixers have relentlessly chosen character over mercurial talent. And they’ve successfully assembled a team of good dudes who aren’t transcendental basketball players. Instead of building around hotheaded goliath DeMarcus Cousins, they selected Evan Turner in the draft. That decision doomed the franchise for a decade.

Despite the Sixers’ struggles, they’re still a team praised by advocates of advanced metrics. Based on their offensive and defensive ratings, their “expected” record would be 37-19, fifth best in the league. Their defense is second only to Boston in surrendering the fewest points per 100 possessions. John Hollinger puts them seventh in his current power rankings.

Support from the pocket-protector set won’t help Philly in the playoffs — assuming they even make it there. This team was never going to oust Miami or Chicago, but their early success broached the possibility of a first-round matchup against a vulnerable team like Atlanta, Boston, or Orlando. That’s not happening now. Last year, when the Sixers lost in five games to the Heat, the series was regarded as a harbinger of coming success. This year, it will be a death knell for the Sixers’ middle-class dream.