Broncos Defense Has Canceled Its Encore 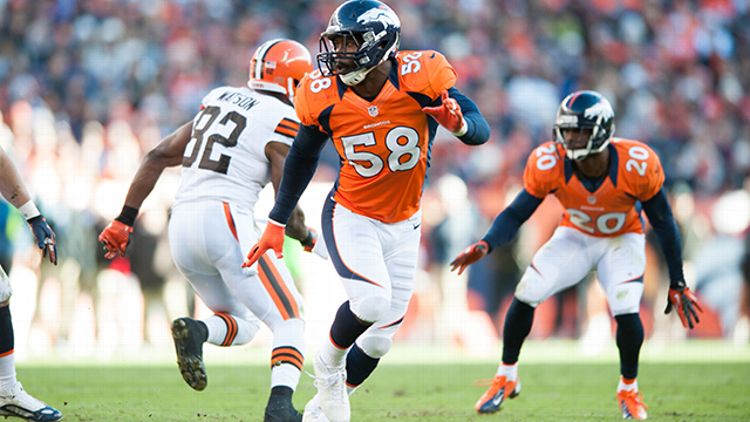 While last year’s Denver Broncos were rightly celebrated for the strength of their offense, their defense also deserved plenty of plaudits. After all, Jack Del Rio’s unit jumped all the way from 24th to fourth in scoring defense, allowing a mere 18.1 points per game during the regular season. How did they pull that off? Well, you know about the big names on the defense, but one hidden path they took toward success went through an oft-underrated locale: health. Nine of Denver’s 11 defensive starters played in all 16 games, with linebacker Wesley Woodyard missing one game and cornerback Tracy Porter only making it through six. (Linebacker Joe Mays did miss time, but that came after he lost his job to veteran Keith Brooking.) That’s 11 missed starts, an impressively low total that’s also extremely difficult to sustain from year to year.

It already seemed likely the Broncos might take a step backward after losing Elvis Dumervil to the Ravens in free agency, but after the past few days, they’re facing a devastating shortage for the early portion of the 2013 season. During their preseason game against the Seahawks this weekend, three players suffered injuries that could keep them out for meaningful action.

First, linebacker Stewart Bradley, who was competing for a starting job on the inside, suffered a wrist injury that forced him to undergo surgery on Monday. Then, star cornerback Champ Bailey went down with a foot injury that forced him onto crutches after the game; he has a foot sprain that is expected to keep him out for several weeks. Defensive lineman Derek Wolfe, a rising player, had the most distressing injury of all. His spinal injury saw him leave the field on a stretcher and then be taken away by ambulance. Fortunately, Wolfe retained movement in his extremities and passed a series of tests after the game. It’s great to see that Wolfe is (relatively) OK, but there aren’t any details yet as to whether he’ll miss time.

After that injury-riddled weekend, you would have forgiven the Broncos’ wish for a quiet Monday. Instead, they got more bad news. Details of Von Miller’s impending suspension broke, and while there were previously rumors that Miller might be suspended for four games with the possibility of appealing down to a shorter sentence, new reports suggested that Miller will likely be suspended for six games, with some small hope of reducing the sentence to four.

The story also detailed the nature of Miller’s transgressions. He reportedly tested positive for marijuana and amphetamines after the 2011 lockout, with a second incident occurring more recently. In that incident, Miller apparently spilled a would-be sample, wasn’t able to produce a second sample, and then delivered a “diluted” sample after drinking fluids throughout a subsequent practice. It seems like a pretty frustrating way to lose six games of a regular season.

If you’re a Broncos fan, this has to be distressing. Losing Dumervil this offseason was one thing; the Broncos could probably have approximated his production with the arrival of Shaun Phillips from San Diego in free agency. Now, it’s entirely possible that the Broncos will begin the 2013 season without their four best defenders from last season: Miller, Bailey, Dumervil, and Wolfe, plus Bradley, who was on the verge of winning the job at their weakest spot on the line. And even if Wolfe is able to come back from his spinal injury relatively quickly, there’s no way they can replace an absent Miller or Bailey. Those guys are just too good, and there’s nobody on the roster who can do a passable imitation of their skills. Missing them both at the same time could be truly brutal.

It hasn’t been that long since the last time a Broncos defense faced similar odds. The 2009 Broncos defense improved from 30th in points allowed to 12th by adding a few veterans and staying shockingly healthy; that year, the 11 starters only missed a combined three games. They had that total beat the next year before the season even started, as Dumervil suffered a season-ending injury during training camp; the Broncos would eventually suffer more injuries and produce the league’s worst scoring defense in 2010. Miller’s “suspension” isn’t an injury, but his unavailability combined with the early-season injury to Bailey can’t be promising for their hopes of fielding a great defense in 2013. They might not need a great D to make the playoffs with Peyton Manning around, but the difference between a top-five and league-average defense might end up serving as the difference between a first-round bye and a trip to New England or Houston in the playoffs.

Video: Kings of L.A. Beat Hank's A-1 All-Stars in the Drew League Semifinals