Bracing for the RG3 Backlash 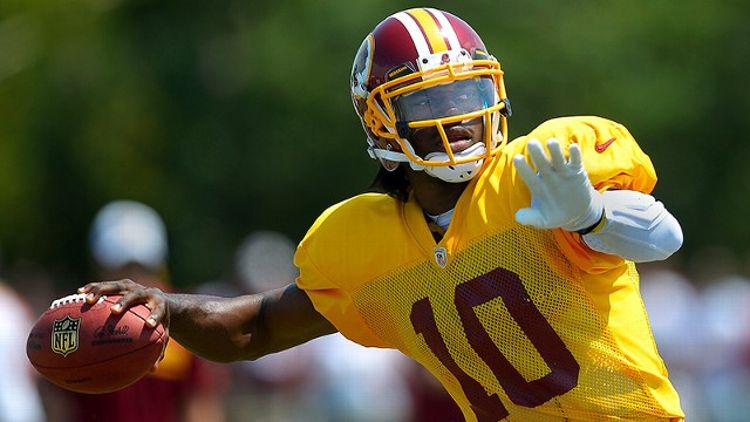 Somewhere in the middle of the latest controversy involving Robert Griffin III, I realized that is just how it’s going to be for a while. For some context: In the past week or so, RG3 was asked how he felt about sitting in the preseason. “I can’t B.S. that answer,” he said. “So, uh, no. I don’t like it. There’s some part of it that I do understand. I don’t understand all of it. At the end of the day he [head coach Mike Shanahan] gave me his word. We talked privately. I know the whole plan. I’m not telling the whole plan. I don’t understand the whole plan at all and I can’t lie about that.”

It was a confusing sound bite. Whatever point he was trying to make clearly came out sideways, and more importantly, it left the door open for everyone else to jump in and put their on spin on what’s happening in Washington.

For his part, Shanahan defended the decision to sit RG3, saying, “We do have a plan for him. He may not always like that plan, but that’s my job sometimes not to be liked. My job is to do the best thing for him. That’s what I’ll do.”

To review: The player wanted to play, and after flunking this exact situation on national television six months ago, the coach decided to play it safe this time.

This shouldn’t be that controversial.

There is no friction. There is an understanding between coach and player. That is all. Don't have to like everything

We’ve still been debating RG3 all week. He was compared to a diva receiver, called insecure, and pitted against his coach to frame all these discussions. By the end it all just blended into one long lecture. As one Washington Post writer put it, “Griffin has been great for the Redskins, whose future is bright largely because of him. But he still has to learn that everything doesn’t revolve around what he wants — and that’s something worth talking about.”

But that’s the thing — none of this is worth talking about. If you want to parse the dynamics between him and Shanahan, wait till something meaningful happens. If you want to parse what RG3 “still has to learn,” just … don’t. In three weeks, nobody — not the player, not the coach, not fans, not media — will give a shit whether RG3 played in a random preseason game.

Anyway, the controversy itself was one thing, but seeing that meaningless quote from last week boil over into a Summit on Robert Griffin this week, I realized that from here on out, this stuff will be part of the RG3 experience. He’s part of the stupidity cycle now.

It’s a specific kind of sports news that feels unique to the last five or 10 year. It starts when a story becomes polarizing, the media realizes it, and then we all just get beaten to death with that story for like six weeks straight. You have people saying really dumb things, other people dedicated to highlighting and mocking those dumb things, others trying to maintain perspective and be levelheaded about everything. Before long it doesn’t even matter who’s being smart and who’s being dumb, because it’s all blended into a noise that just WON’T. GO. AWAY.

At this point, I don’t care if Johnny Manziel stole the Heisman Trophy, signed it, sold it for a kilo of cocaine, and then spent his summer dealing drugs in College Station. Nothing is ridiculous enough to make me care about a Johnny Manziel story for the next six weeks. It’s all like nails on a chalkboard. (Really, though: If Johnny Manziel is exposed over Labor Day weekend as a secret drug kingpin, that would actually be a pretty great way to end this summer.)

Whether it’s Tebow, LeBron, Dwight, Favre, Cam Newton … ESPN plays a big role in all this, obviously, but the stupidity machine works across all media. Grantland does it sometimes, I do it as a joke every Tuesday, and every other day there’s a column that gets everyone outraged on Twitter. It’s all sort of ingrained now.

It’s probably been this way forever, and the combination of Internet and 24-hour news amplifies everything. Either way: Once someone becomes a HOT TOPIC, it doesn’t even matter whether there’s news. Manufacturing story lines and controversy about a handful of polarizing athletes has becomes its own industry, and it’s clearly good for business, because the whole phenomenon has only gotten worse over the last decade. (Twitter makes it so much worse, too, because then you have to watch people complain about it all day, and eventually that becomes as unbearable as the news itself.)

It’s all a big, stupid cycle. But you know that. Seeing RG3 coopted into it is what’s kind of jarring. The player who was pretty much impossible to root against — literally one of the only things all football fans could agree on — is, I guess, going to be someone we can all argue about for the next few years. Somewhere along the line he’s become this polarizing force, where trolls now realize that any imaginary controversy involving RG3 will get people angry and keep people engaged on all sides.

This week’s imaginary controversy is when it clicked for me: RG3 is the next Manziel, the next Tebow, the next LeBron. For a few different reasons.

1. He set unimaginably high expectations last year. People saw his rookie stats and said, “Wow, if he can do this his first year, imagine when he gets more comfortable.”

Everything a rookie QB does is a bonus. We expect them to be overwhelmed, so RG3 was graded on a curve. Against that curve he looked like one of the most impressive quarterbacks anyone had ever seen. Now, in year two, that curve gets replaced with expectations that he not only duplicate the success but get even better. Every time RG3 doesn’t measure up, he’s going to be a disappointment. When people point out that he’s still just a second-year QB playing on a mediocre team, those people will be called out for making excuses for him. Then we go back and forth arguing, people on Twitter complain, etc. I hate it already.

2. The Redskins are the Redskins, and nothing good ever happens to the Redskins. It’ll be pretty shocking if they come out and go 10-6 all over again. And as soon as they start to lose? BOOM, headlines:

We know he’s exciting, but can you win with him?

Does RG3 have his priorities straight?

RG3 is running, but can he run the offense?

[RG3 gets hurt, Redskins win a game without him]

Would the Redskins be better with Kirk Cousins in charge?

3. RG3 isn’t shy about reaching out to the media, whether with press conferences, impromptu clarifications, or vague motivational messages on his Twitter account. It’s great that RG3 is candid and thoughtful, definitely. But once he gets caught in the cycle of stupidity, anything he says will just feed the stupidity and keep it going. Isn’t that pretty much what happened in the last week? Until he learns to just ignore everyone, his candor will work against him.

4. The biggest point: RG3 really might have some issues with trusting Shanahan. We don’t know. Especially after the way last year ended, it makes sense that he’d be a little more suspicious about the way the Redskins handle him. How that relationship evolves will be fascinating, especially if the Redskins start losing.

That’s the thing with all the stories that get swept into this awful cycle. They don’t start out as insufferable. Even the Tebow thing was pretty crazy when it first got started. But after these narratives go through the stupidity machine and everyone starts speaking in absolutes, it all becomes too much to handle. At a certain point it doesn’t even matter who’s right — the whole story just becomes too annoying to think about.

That’s where we’re headed with RG3. This isn’t to criticize anyone or get all preachy; it’s just a warning. Hopefully if we all realize what’s coming, it’ll be easier to tune out the ridiculousness.

It’s one thing when guys like Tim Tebow or 40-year-old Brett Favre get co-opted into the stupidity cycle; they almost work better as sideshows. But RG3 is so much better than all that. He was probably the most exciting player in football last year. If the RedZone Channel had an MVP award, he would’ve had it sewn up by Week 8. He’s stupidly impressive off the field, and on the field, he took a franchise that had been dead and hopeless for the better part of 20 years and turned things around in the span of three months. Superstars like that are the ones who end up transcending games, and teams, and even seasons. Or, to put it differently: Guys like RG3 are the athletes that we remember forever.

Now it’s year two. Everything will get more complicated, and probably a little unbearable. It’s inevitable. So as far as RG3’s concerned, just try to enjoy what happens on the field and tune out the rest. And remember the most important lesson for any fan in 2013: Don’t let sports media ruin sports for you.