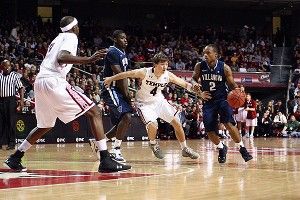 It seems odd to call Philadelphia a basketball town. Despite their success early this season, the Sixers are a distant fourth in fan interest as far the city’s professional teams go. The Eagles and Phillies dominate the headlines, and the Flyers have an avid, raucous following. But with five Division I basketball programs (actually six, but no one cares about Drexel) clustered together within miles of each other, the city every year morphs into one of the true havens of college hoops as soon as the Eagles are eliminated.

The Big 5 started in 1955 when the athletic directors at La Salle, Penn, St. Joseph’s, Temple, and Villanova decided they would all play the vast majority of home games at the Palestra on Penn’s campus in doubleheader formats. Out of this arrangement, the city series was born, an annual round-robin tournament between the five schools. Several major cities have multiple major programs, but none of them play each other with any regularity. Yet for all but an eight-year stretch in the ’90s, the Big 5 schools have dutifully faced each other, playing for a largely mythic city championship and bragging rights at Sonny Hill League summer games.

Although all five teams harbor a healthy dislike for each other, these are largely bloodless rivalries. Unlike Duke and Carolina, or Alabama and Auburn, Big 5 fans traditionally have not woken up every morning hating any one team in particular. (St. Joe’s fans would no doubt cite Villanova as their biggest rival, but this feeling is largely unrequited, as Nova fans are more likely to rattle off four or five Big East schools as their chief enemies before getting to the Hawks.) Rather, the five are more like a family; Penn of the Ivy League is the smart older brother, St. Joseph’s the loud and obnoxious younger sister, and La Salle the slightly senile grandfather prattling on about how great things were back in the day. (Drexel is the unloved stepchild from a previous marriage, or perhaps the family pet. Sorry, Drexel.) Temple and Villanova are mom and dad — the twin pillars of the city’s college hoops establishment. But all five schools have had moments in the sun.

La Salle has largely become an afterthought in the city series, but it hasn’t always been like this for the Explorers. In 1954, the year before the Big 5 started, the Explorers won the national championship behind Tom Gola. The team returned to the finals the next year, only to fall to Bill Russell and San Francisco. The school continued to field successful teams throughout the ’70s and ’80s, but fell into mediocrity in the ’90s. An attempt to land Kobe Bryant by hiring his father as an assistant coach failed, and it has been nearly 20 years since the Explorers were invited to the Big Dance.

Perhaps no school takes the Big 5 as seriously as St. Joseph’s. The Hawks hate Penn because they are Ivy League snobs. They hate Temple because they have state school money, a history of success, and the Owls’ former coach once sent in a guy to commit hard fouls and ended up breaking one of their guy’s arms. They mainly hate La Salle because they just have a lot of hatred and no one is spared. But the team they really hate is Villanova, because St. Joe’s and Villanova are practically the same school, except Villanova is better at everything. St. Joe’s went to the Final Four in 1961 and came within one missed shot of repeating the trick in 2004, but Jameer Nelson’s shot hit the front rim and the dream died. The Hawks have only made the tournament once since then.

Penn’s Palestra, which opened in 1927 and is the beating heart of the Philadelphia basketball scene, is an acoustic marvel. With an arched ceiling, vaulted steel rafters, and a row of skylights on the south side, the building somehow manages to make a capacity crowd of 8,700 sound like a mob five times as large. It has hosted more college basketball games than any other facility, and basketball junkies still make pilgrimages to see games in a building that from the outside more closely resembles a cathedral than a gymnasium. In the early ’90s, the Quakers were arguably the best team in the city and an Ivy League juggernaut. From the winter of 1992 to the spring of 1995, they went 42-0 in Ivy League play. The Quakers also went to the Final Four in 1979. But it is their home court that assures their place in Philly basketball lore.

No city game is bigger than the annual tilt between Temple and Villanova. One would be hard-pressed to find two schools with as little in common. It’s suburban versus urban. Private versus public. Rivalries in Philly’s Big 5 are built on such contrasts.

Temple is the city’s best this year. At 22-6, it is all but assured of a trip to the NCAA tournament, despite an 82-72 loss to St. Joseph’s on Saturday night, which cost the Owls the outright city crown. (Temple is technically 5-1 against city opponents this year, but an earlier win against St. Joe’s and one of the team’s two wins against La Salle do not count toward the Big 5 standings. St. Joe’s, with whom the Owls shared the title, is now 3-2 in city games. Well, 4-2 if you count Drexel, but nobody counts Drexel.) But city games haven’t been easy for the Owls. They trounced Nova back in December, but were taken into overtime by both Penn and La Salle. And this is a Temple team that beat Duke earlier this year. Temple went to the Final Four in 1956 and 1958, and under coach John Chaney went to the Elite Eight five times, but would never get any further. This year’s team is probably the best Temple squad in a decade.

To be sure, no Big 5 game is a battle for the heart of the city. Philadelphia is a pro sports town, and no college team could ever change that. But during the well-documented stretch of losing between when the Sixers won the NBA title in 1983 and the Phillies finally ended the championship drought in 2008, the city longed for a winner. So any team that appeared capable of breaking the hex could capture the region’s imagination. We howled when Kerry Kittles and Villanova won its first and only Big East tournament title in 1995 and looked primed to make a Final Four run only to lose to 14th-seeded Old Dominion in triple overtime in the first round. We moaned when Chaney brought Temple to within one game of the Final Four five times in 14 years, only to fall in the regional finals each time. And we cried when Nelson and St. Joe’s lost to Oklahoma State in the 2004 Elite Eight. More than anything, we just wanted a parade that didn’t involve drunken Mummers on New Year’s Day. In 1985, Villanova gave us one.

It is impossible to overstate just how big an underdog Villanova was when they pulled off their I-can’t-believe-this-is-happening NCAA tournament upset against Georgetown to cap off one of the most unlikely championship runs in tournament history. But Villanova played as close to a perfect game as the tournament has ever seen, and beat the Hoyas to become the lowest-seeded team ever to win the national championship. With the monumental victory came outsized expectations for the program and for the coach, delusions of grandeur. Coach Rollie Massimino, whose profile and ego had both grown exponentially since the championship season, would watch his Wildcats register double-digit loss totals in six consecutive seasons following the 1985 campaign. Nonetheless, he began to believe Villanova had outgrown the city championship. So he did the unthinkable. In 1991, he blew up the Big 5.

In fairness to Massimino, the decision to discontinue the citywide round-robin was made by the higher-ups in the athletic department, citing the school’s new commitments to the ever-expanding Big East. But Massimino took the brunt of the criticism. (Over the years, he had made no secret of his disdain for having to play the other city schools.) Hounded in the city for ending the series, Massimino left Villanova the following year for UNLV. After two years in Vegas, Massimino resigned. Today, Rollie Massimino, architect of one of the greatest upsets in college basketball history, coaches in relative obscurity at a NAIA school in West Palm Beach. Villanova reconsidered in 1999, and the full round-robin was reestablished.

Villanova is way down this year, and La Salle will need a miracle to make the Big Dance. But all is not lost. With the win on Saturday, St. Joseph’s greatly improved its chances to gain an at-large bid into the tournament. And by beating Harvard on Saturday, Penn has shaken up the race for the Ivy League crown — win out, and the title and the NCAA tournament berth is theirs. (Yes, Drexel is 16-2 and in first place in the CAA — the conference that has given us George Mason and VCU in recent years — but I cannot stress this enough, nobody cares about Drexel.) Temple will be a tough out come March. But the city’s basketball teams have yet again done their job. They have kept things interesting until Opening Day for the Phillies.

Brandon Lilly is a Brooklyn-based freelance writer whose work has appeared in the New York Times, the Boston Globe, and ESPN the Magazine.