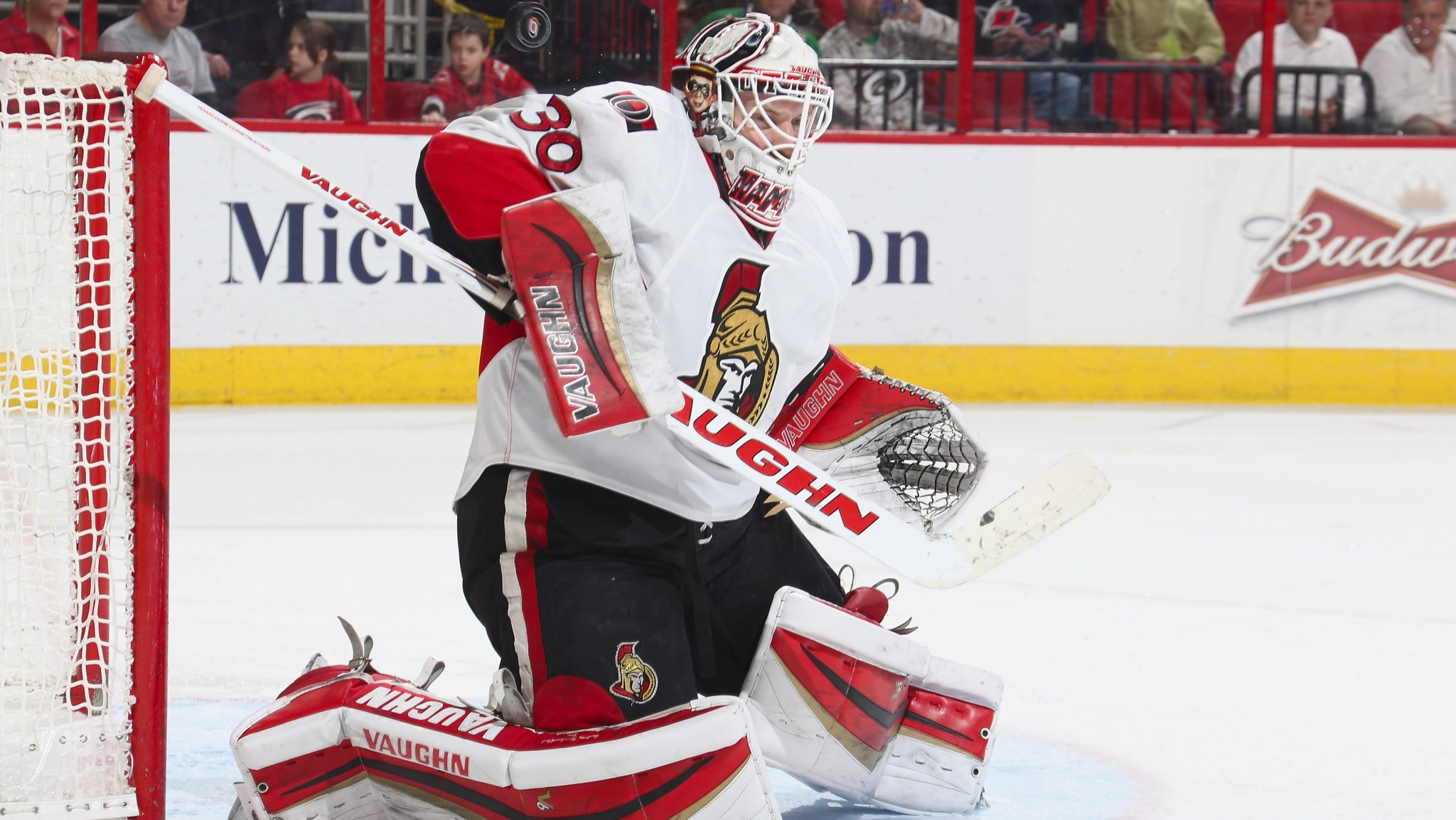 Ottawa Senators goaltender Andrew Hammond has become one of the season’s best stories. The 27-year-old rookie has come out of nowhere to post one of the best starts to an NHL career we’ve ever seen. After last night’s 2-1 overtime win over the Hurricanes, Hammond now boasts a career record of 11-0-1, and has tied Frank Brimsek’s record by starting his career with 12 straight games allowing two goals or fewer.

Now that Hammond has started writing his name in the record book, he’s in some elite company. When it comes to goaltending records, most fans know the basics. It’s Martin Brodeur for regular-season wins and shutouts. Patrick Roy for playoff wins. And, of course, Glenn Hall’s 502 consecutive games, which stands as probably the most unbreakable record in all of pro sports.

Those records are fun, but as regular readers know, I like to go a little more obscure. So today, in honor of Hammond’s miracle run, let’s take a look at 10 of the more unusual goaltending marks in the NHL record book.

Most Games Without a Loss at the Start of a Career: 16

This is one of the records that Hammond is chasing, kind of, or maybe not, since in today’s NHL an overtime or shootout loss only sort of counts. But in any event, Senators fans hoping that they’ve somehow stumbled on the next Ken Dryden probably won’t be thrilled to be reminded of the man who once started his career by going 16 games without losing: Patrick Lalime.

Lalime set the record with the Penguins in 1997, topping the 14-game mark held by Dryden and Ross Brooks. He cooled off, but still ended the season with an impressive 21-12-2 record, and finished fifth in rookie of the year voting. Oddly enough, that would be the end of his time in Pittsburgh, and his NHL action at all for more than two years. He finally returned to the league in 1999 as a member of the Senators.

It was during his time in Ottawa that Lalime established a reputation as a solid regular-season goalie who couldn’t win the big game in the playoffs. We’ve covered this before, but it’s worth repeating here: that reputation is nonsense, because Lalime had excellent playoff numbers. But a handful of bad games, including one memorable Game 7 meltdown against the Maple Leafs, sealed his fate.

Lalime ended up playing for five teams over 12 seasons, earning an even 200 regular-season wins. Andrew Hammond would probably be thrilled with that sort of career, even if it’s not quite Drydenesque. In any event, Hammond can at least know that Lalime is rooting for him.

Most Penalty Minutes in a Season: 113

Goalies occasionally get mixed up in physical play, and every now and then they’ll even drop the gloves and square off. But only one goaltender in NHL history has ever cracked the 100-plus PIM mark, and you’ll never guess who it was.

Wait, did literally everyone just guess Ron Hextall? OK, in that case everyone is right.

Hextall topped the century mark for three straight years in the late ’80s, peaking with 113 PIMs in 1988-89. Those seasons give Hextall the top three spots on the all-time list, and while he calmed down in later years, his name still appears three more times in the top 25. More impressively, his 1988-89 total doesn’t even include his most famous meltdown from that season, since that occurred during the playoffs.

The record for most PIMs in a season by a goalie who wasn’t Ron Hextall is 70 minutes, and the owner of that mark actually is a bit of a surprise. It’s not a noted crease defender like Billy Smith or Eddie Belfour, or a slugger like Sean Burke, Ray Emery, or even Patrick Roy. No, the non-Hextall title goes to Tom Barrasso, who set the mark during a 1988-89 split between those oddball Buffalo Sabres and the Penguins.

Most Points Scored in a Game: 3

Hey, speaking of guys getting KO’d by Ron Hextall …

That would be Jeff Reese, of course, the recently fired Flyers goalie coach who also holds the NHL record for offensive output by a goaltender. That came back in February 1993, when Reese and the Flames ran up the score in a 13-1 win over a truly awful San Jose Sharks team. Reese earned assists on three of those Calgary goals, setting a new NHL record for both assists and points by a goaltender in a single game.

Most Career Games Played Without Recording a Shutout: 132

In addition to having an awesome name, amazing hair, and once getting trucked by Tiger Williams, Reddick’s claim to fame is having played in 132 career games for three teams over six seasons without ever recording a shutout. That puts him nearly 50 games ahead of the next goalie on the all-time list, Jim Hrivnak, who went 85. And Reddick never even came all that close — as best I can tell, he had only three career starts in which he played the full game and gave up just one goal.

As an added bonus, here’s Pokey fighting Reese in an IHL game.

Most Goals Allowed to an Opposing Goaltender: 1

Over the years, a handful of goalies have been credited with scoring a goal into an empty net, either by shooting the puck the length of the ice or just being the last to touch it before the opposing team scored on itself. And plenty more have given up terrible long-distance goals. But only one goalie has ever surrendered a goal to an opposing netminder — and it wasn’t even his fault.

It happened on March 21, 2013, during a game between the Devils and Hurricanes. Early in the first period, a delayed penalty was called against New Jersey, and Carolina goalie Dan Ellis headed for the bench for the extra attacker. But shortly after he left the crease, the Hurricanes accidentally sent the puck the length of the ice back toward their now empty net. Ellis tried to race back, but was too late.

Because Martin Brodeur had been the last Devil to touch the puck, he was given credit for the goal. And because Ellis was on the ice when the puck went in, the goal went on his record. It’s the only goal ever awarded to a goalie that wasn’t recorded as an empty-net goal, and it makes Ellis the only netminder in league history to have technically been scored on by the opposing goalie.

With all due respect to Reddick, shutouts have been a relatively common occurrence through hockey history. That’s been especially true when scoring was low, like it was during much of the ’50s and ’60s as well as the ongoing dead puck era.

So it’s a bit surprising that the record for longest shutout streak to begin a career is a relatively low 102:48, or fewer than two full games. Based on this list, 25 goalies have made their NHL debuts with a shutout, but none has ever managed to do it in back-to-back games.

Maybe even more surprisingly, the guy who owns that record 102:48 streak never recorded a shutout at all. He’s current Sabre Matt Hackett, and he set the record as a member of the Minnesota Wild three seasons ago. His NHL debut came in San Jose on December 6, 2011, when he stopped all 34 shots he faced. But he didn’t start that game, instead coming in after Josh Harding got hurt about a minute into the game. So technically, he didn’t get credit for a shutout.

Hackett made his first career start two days later, and carried a shutout into the third period before finally allowing his first NHL goal four minutes in. That gave him the shutout streak record, despite not earning an actual shutout. In fact, to this day, Hackett still doesn’t have an NHL shutout. He’s got just 109 games to go to catch Reddick.

OK, now we’re piling on poor Pokey with the whole shutout thing. Back in 2004, one goaltender managed to post a shutout in five straight games. And it wasn’t even an especially good goaltender — just a guy who got white hot and became unbeatable for a two-week stretch.

That would be journeyman Brian Boucher, then with the Phoenix Coyotes. From December 31, 2003, through January 9, 2004, Boucher shut out the Kings, Stars, Hurricanes, Capitals, and Wild. The streak ended on January 11, when Atlanta’s Randy Robitaille scored a fluke goal early in the first. It would be the Thrashers’ only goal of the game.

Those five shutouts would be the only five Boucher would record in parts of three seasons in Phoenix, and he managed just 12 more in the other 323 games of an NHL career split among seven teams. But for a few weeks a decade ago, he morphed into the greatest goaltender in NHL history.

Most Saves in a Single Game: 92

Every now and then, a goaltender has one of those once-in-a-lifetime games. Ben Scrivens’s 59-save shutout last year. Ron Tugnutt stopping 70 of 73 shots against the Bruins in ’91. Dominik Hasek making 70 saves of his own to outduel Martin Brodeur in a quadruple-overtime classic in ’94. Even little-known Sam LoPresti making a regular-season record 80 saves all the way back in 1941.

But as impressive as all those efforts may be, they don’t come close to the NHL record for saves made in a single game. That one has stood for nearly eight decades, and belongs to Red Wings goalie Normie Smith. On March 24, 1936, the Wings faced the Montreal Maroons in the playoffs in what would become the longest game in NHL history. The teams were scoreless after regulation, and stayed that way into a sixth period of overtime before Mud Bruneteau finally beat Montreal’s Lorne Chabot for the winner.

Smith’s final stat line: 92 shots faced, 92 saves made, and 176:30 minutes of shutout hockey — just short of three full games’ worth. Wayne Gretzky’s goal-scoring in 1981-82 isn’t the only virtually unbreakable NHL record that ended up at 92.

What are you doing, Patrick?

Fewest Goals Allowed in a Loss: 0

An NHL goalie is credited with a loss when he’s the goalie of record when the winning goal is scored against him. In theory, that makes it pretty darn difficult to lose a game without, you know, giving up a goal. Difficult, yes, but not impossible, as a guy named Mike Murphy proved in 2011.

Murphy is still an active player, most recently seen plying his trade in Austria. But at this point, he has only two career NHL games on his résumé. Here’s what his career stats line looks like:

That’s right: Murphy has never allowed a goal in the big leagues, and yet is somehow the proud owner of an NHL loss.1 I’ll pause here to give you a second to figure out how that’s even possible.

Here’s how it went down: During a game against the Flames on December 6, 2011,2 Carolina starter Cam Ward gave up six goals before being pulled in the third period. Murphy, the backup that night, went in to mop up with his team down 6-3. The Hurricanes scored to trim the deficit to two goals, and it stayed that way until the team pulled Murphy for an extra attacker in the dying minutes. It didn’t work; the Flames scored into the empty net to make it 7-4 and ice the game.

So far, so good. But then the Hurricanes scored two goals in the final minute to make things interesting. It was too little, too late, and the Flames won the game by a final score of 7-6. But because of the comeback, that seventh Flames goal — the one scored into an empty net — ended up being the winner. And because Murphy was the goalie of record at the time, he took the loss, even though he wasn’t on the ice.