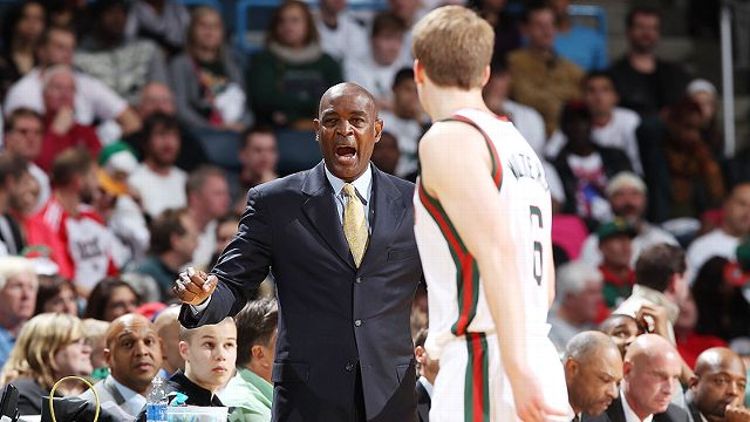 Pacers 68, Bucks 65. Fourth quarter of an early-season Central Division clash, the under-strength Bucks hanging tough with the class of the East. My 6-foot-3 MyPlayer — the Bucks’ rookie point guard — is having a nice game: nine points, 60 percent shooting, two assists, a rebound, and a steal in 11 minutes off the bench for a B+ rating.

Sensing the moment, virtual Larry Drew calls a timeout and unveils a tactical decision dripping with genius: He puts my player at power forward to check David West, who promptly rolls over my simulacrum like an 18-wheeler over a pile of leaves, costing me three straight Allow Player to Score penalties. On the other end, I try to take West out to the deep water where I can use my speed to get by him, but end up missing an open 3-pointer and accruing more penalties for calling for the ball too much (again, I’m a point guard).

I finish with 13 points, four assists, two rebounds, and a C- rating. Overall performance rating: Poor. And, adding insult to injury, as I’m driving to practice Virtual Luis Scola starts tweeting at me, talking about how he shut me down, blah blah blah.

If it’s a sports video game, we want the virtual players to look like their flesh-and-blood counterparts; we want to see the uniforms ripple as the players move; see the pixel-generated sheen of sweat glisten on their simulated forms; see the complex ballet of movements re-created in seamless graphical precision.

If it’s a first-person shooter, we want to see the well-worn metallic gleam of the weaponry, the bloom of the muzzle flash. If it’s a driving game, we want to see the sun refracting off the hood of our virtual GT-R, the leather on the steering wheel, watch the needles on the dash respond as we open up the throttle.

OK, but how real, how really real, should a video game be? You don’t want to have to slog through basic training, with some virtual drill sergeant barking at you, before you even get to fire your video game weapon. Or take a driver’s exam before ever getting to race. I don’t want to do those things. I want to do the fun stuff, like running up and down the court, jacking every shot (if I want), trying to dunk in traffic (if I want), without all the hassle of working toward building the facility to actually do those things in real life. That’s why I play video games, to do things I can’t do. To daydream, in effect, out loud. If I want a feeling of accomplishment, I’ll pay my rent.

Some background: NBA 2K14, from developer Visual Concepts and publisher 2K Sports, is the preeminent NBA video game on the market, having overtaken its onetime rival, the NBA: Live series, over a decade ago in terms of quality and gameplay. Like every other leading sports video game for its particular sport — the Madden series, MLB: The Show, EA’s NHL and FIFA series — 2K had, up until the 2K14 edition, a Create-A-Player option. This gave the end user the power to do exactly what it says: craft a virtual player to any specification — age, birthplace, alma mater, size, position, facial features, vertical leap, running speed, shooting ability, etc. — and place that player on the user’s favorite team.

My 2K methodology used to go like this: I’d make myself (plus a few tattoos and maybe cornrows) in the game as a do-it-all point guard (I want the ball in my hands), max every stat to level 99, put my virtual avatar on the Knicks, and lead the team to their first title in 30-whatever years. Occasionally I’d also make a 6-foot-4, 350-pound power forward (also maxed to 99) named Fatman Crothers.

Then Virtual Me and Fatman would proceed to set the league on fire, breaking age-old scoring records and piling up an ungodly number of awards. I would spend an unseemly amount of time rewatching my saved highlights, searching out the best camera angle to capture the surprise on Dwight Howard’s face as I dunked over him, or Kobe calling for help as I crossed him at the top of the key.

This year, Create-A-Player is gone, replaced with 2K14’s revamped MyPlayer system. In MyPlayer, the gamer molds a player from a set of positional and aesthetic presets, plays in an NBA draft showcase game, and eventually gets drafted by a team. From there, the player has to work his way into the lineup, listen to instructions from the team’s virtual coach, and get along with his teammates and the media in order to progress to the level of NBA superstar. And, listen, MyPlayer is fine. It’s a perfectly OK game mode, if that’s your thing.

The problem is it’s too real in its attempt to re-create the actual slog of athletic development, interpersonal bonhomie, and big-time-sports locker room/front office politicking required of an actual NBA player. (This is also my problem with Grand Theft Auto Online. For all the chaos, fast driving, and gunplay, your goal in there is essentially to have enough money to buy a nice house and some cars. Sorry, but that’s what I’m trying to do out here.)

The difficulties include the smaller, more spit-and-polish details: the multiple, interminable conversational cut scenes that the gamer cannot skip through; the inability (as far as I can tell) to skip games, meaning you must sit through all 82 regular-season games. There are also structural issues: the dialogue choices that your MyPlayer can respond with, and the vaguely moralistic lessons the game seems to be trying to teach you (the human sitting on your couch) about teamwork, love of the game, putting winning first, and not going out to nightclubs.

If you respond to a question from a reporter about what motivates you with something like “I want to get paid,” you can expect to hear about it from virtual teammates, coaches, and sports pundits.

This is a game that wants you to play “The Right Way,” and that’s fine, but it should be my choice. How people engage with their video games is a personal affair. For me, basketball video games are an extension of that universal hoop fantasy: a lone kid, counting out the imaginary seconds of Game 7, launching the shot and winning the title for his favorite team.

MyPlayer scuttles that daydream. You can’t pick which team your player lands on (you can demand a trade, but — just like in real life — this usually doesn’t work out how your player wants it to). You have to listen to your virtual coach’s teachings or you’ll get benched, even if your virtual coach is clearly an idiot. I don’t know about you, but I didn’t pay $60 to play 14 minutes per game off the bench, having to complain to the front office about my playing time, while getting bitched at by Virtual Larry Drew for not passing to O.J. Mayo. This is my daydream, Virtual Larry Drew. Why are you even here?