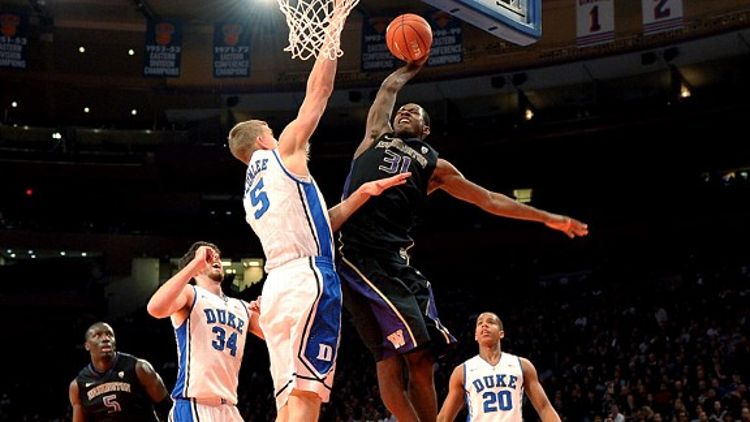 This was a big week for Washington sophomore Terrence Ross. The 6-6 wing got to play two games in a span of five days at Madison Square Garden in New York City, matching up with top-10 ranked opponents Marquette and Duke, both sporting a number of NBA prospects on their rosters.

Virtually every team in the NBA was represented at one of these contests, making this an outstanding opportunity to showcase his talent, with the games being broadcasted nationally on ESPN and CBS.

Ross was not considered an elite-level recruit coming out of high school. In fact, he wasn’t even the best player on his own team back then—that honor went to Kentucky’s Terrence Jones. But his stature has slowly grown, to the point that NBA scouts are now talking about him as a legitimate lottery prospect.

Spend time around those scouts, as I did at MSG, and you’ll quickly learn what they like about him. “He’s a special athlete,” said one. “Everything comes so easy for him,” another opined. “He’s just scratching the surface of how good he can be,” a third gushed. After plays like this, who can blame them.

Ross didn’t want to discuss any of this as his week in New York came to a close, deflecting questions about his individual performance. “It was great for our program to get this type of exposure,” he told us after the Duke game “but not being able to get a win in either game was heartbreaking for me.”

His final tally in New York: 35 points (16-31 FG), 16 rebounds, 5 assists, 4 turnovers, 2 steals in 65 minutes of action. Excluding his very poor first half against Duke, including two air-balls he attributes to “the bright lights,” he showed his talent pretty clearly.

One of the most physically gifted players in college basketball, Ross is a proficient shooter with NBA range. He is dangerous with his feet set, but has the ability to score in the mid-range as well with a picture perfect mid-range jumper. With his unique combination of size and explosiveness, he creates separation effortlessly, converting on over 50% of his off the dribble pull-ups on the season.

Not just a one dimensional shooter, Ross does a good job finding other ways to contribute to his team, be it with his ability to score in transition, on post-up plays, off cuts or working the offensive glass. He’s a willing passer who likes to make teammates better and can be a real presence on the defensive end and especially on the glass when dialed in.

The only thing holding Ross back from emerging as a true star at the college level are his average ball-handling skills, making it difficult for him from to get into the lane in the half-court at a great rate. While he can beat his man off the dribble in a straight line thanks to his excellent first step, he struggles to use his off hand and only doesn’t know how to operate at different speeds at the moment. In addition, he’s not always strong, physical, or crafty enough to finish around help defense. These are all things he obviously still work on considering he’s just 20 years old.

As pointed out a few days ago, here on Grantland, the supply of shooting guards in the NBA right now is much smaller than the demand. It’s not hard to envision Ross going into a private workout this May and knocking a team’s socks off with his silky smooth athleticism and perimeter shooting ability.

In the meantime, Ross will have to find a way to help his 4-4 team win some games in the Pac-12. It will be interesting to see if more offense gets run through him as the season moves on. His freshman teammate, Tony Wroten, ranks 3rd in the NCAA in usage rate at the moment, but also turns the ball over an absurdly high 7.3 times per-40 minutes.

Scouts will be watching to see how Ross performs for UW as they enter Pac-12 play later this month. A NCAA tournament berth likely depends on it.