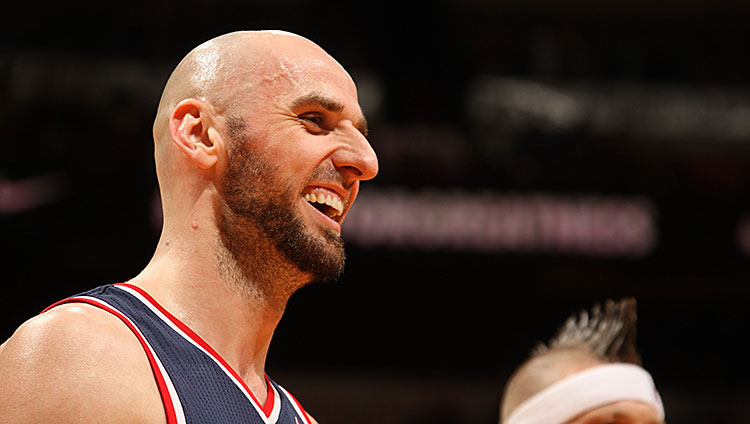 Marcin Gortat’s Instagram is an international treasure. In the last month alone, he’s posted pictures of himself hanging out with a pig, manning some sort of tank,and chilling by the poolside after having one too many Brok Premium lagers.

Gortat’s adventures got me thinking: If this is what he does in his free time, how did he celebrate his contract extension with the Washington Wizards? For that matter, how do any of the NBA’s current crop of free agents celebrate their newfound riches?

Everything below is based on confirmed facts and also totally fictional scenarios.

It’s hard not to admire Gasol — he’s a two-time NBA champion, a four-time All-Star, and, as Sports Illustrated once wrote, “a philanthropic, opera-loving, multilingual former medical school student.” He was this close to making the “Doing It Right” side of this list until a friend made me aware of the following video from 2012:

When basketball players try to do anything remotely outside the realm of their profession, they often hear “STICK TO SPORTS.” For some fans, athletes shouldn’t have hobbies or interests beyond justifying their obscenely large salaries by winning championships. In reality, Gasol’s performance was part of a charity event for UNICEF, and he deserves the right to sing his heart out every year if he’s raising money for a good cause. However, if there’s any chance his post-free-agent partying involved singing in a non-fundraising capacity, I’m going to have to side with the irrational fans here. STICK TO SPORTS, PAU.

You know how competing politicians throw watch parties on election night, and after a winner is declared, TV stations show depressing footage of the losing candidate as his/her event turns into a funeral procession? That’s exactly what a Morey free-agency party would undoubtedly be like. He ran on a platform of spending cuts to make real and substantial changes in Houston, and he came away with … Trevor Ariza and Alonzo Gee. Even Morey’s most loyal constituents can’t be satisfied with his swing-for-the-fences-and-strike-out-like–Bartolo Colon attitude.

Turner hasn’t  signed yet, and I’m not trying to rub salt in his open wounds — he’s going to land on his feet somewhere and continue to be a rich professional athlete. That said, were I to speculate on Turner as a post–free agency partier, I would first establish that he always seems to be at the wrong place at the wrong time. This can be applied to both his spacing on the basketball court and his uncanny ability to do something dumb off it.

I hope Turner avoids putting together his own party and sticks to a night of clubbing instead. Otherwise, there’s no doubt his celebration will be planned at the absolute last minute — not enough alcoholic beverages, noise complaints, the whole shebang.

Kyrie actually committed a party foul — he woke up his friend Dexter Strickland at 5 a.m. shortly after signing a max contract extension.

Do I blame Irving for staying up all night and celebrating? Not in the slightest. But if you’re in a house or apartment, as Irving clearly was, you’ve got to have a little more respect for Strickland. $90 million might be a lot of money, but 5 a.m.? I would’ve been way grumpier than Strickland was.

Usually, signing a five-year contract worth more than $120 million would be cause for celebration. But there’s a catch here: Anthony’s wife, formerly La La Vazquez, has made her affinity for Los Angeles known for quite some time. Beyond the fact that she literally goes by La La, and that James Worthy openly admitted to recruiting her when he pitched Carmelo, there’s this tidbit from her book, The Love Playbook:

I also knew that if I ever bought a house, it would probably be in L.A. It’s so different from New York and Atlanta. L.A. is like my chill place. I can be laid-back and relaxed there. I also could see myself eventually settling there, like my retirement spot.

All of this is to say it’s hard to enjoy yourself at a party when your significant other is longingly staring to the west. And when the center of attention (in this case, Carmelo) isn’t having a good time, it rubs off on everyone else.

Parsons literally signed his contract in a club. He skipped the usual waiting period between inking a new deal and the ensuing celebration and killed two birds with one stone. I’m not sure 55-year-old Mark Cuban was Parsons’s top choice as a wingman for the night, but when you’re getting a very, very significant raise, what’s 30 years between two people?

There was video documenting the event, but it has since been scrubbed from the Internet. Take solace in this picture, because it’s all we have left:

Normally, someone who uses the word “swag” as part of his nickname would be the last person I’d want to party with [Editor’s note: Or the first.]. But this is Swaggy P, without a doubt the most interesting man in the NBA. A Los Angeles native who grew up a Lakers fan, I can only imagine the good vibes Young sent off to anyone in his partying vicinity after re-upping in the City of Angels for four more years. He also says no to drugs, which is perhaps the swaggiest thing about him.

3. Dwyane Wade: TBD, but we all know he’ll re-sign with the Miami Heat

Wade isn’t known as the most endearing guy in the world, so a fair amount of jokes about LeBron leaving him out to dry have been made the last few days. That’s all well and good, but those jokes conveniently leave out that Wade will have to “toil away” … in MIAMI. Wade wasn’t banished to Siberia or Milwaukee. He’ll get a shiny new contract that will allow him to continue playing basketball games for a living while doing stuff like this in his free time:

Seriously, things could be worse. He has a yacht with his name on it.

The French start sipping champagne as a prerequisite to enrolling in grade school (right?), so I can only imagine what kind of International House of Partying was constructed after Diaw signed an extension with the Spurs. Personally, I’m more of a three-buck moscato, Keystone Light, and Hot Pockets guy, but that doesn’t mean I wouldn’t happily indulge in creamy garlic escargot and Bénédictine with names I can’t pronounce. Ain’t no party like a Boris Diaw party.

Gortat is the guy at the bar who’d crush 10 beer cans with his forehead and then sing Whitney Houston on the karaoke machine. He’d get a tattoo on his face on a dare, and then have it laser-removed a few hours later. He’s a lover and a fighter. The man also knows his pierogies, a staple of any proper Polish party.

I’d be cool with having the biggest pierogi belly ever if it meant I got to hang out with the Polish Hammer the night he signed his new contract.