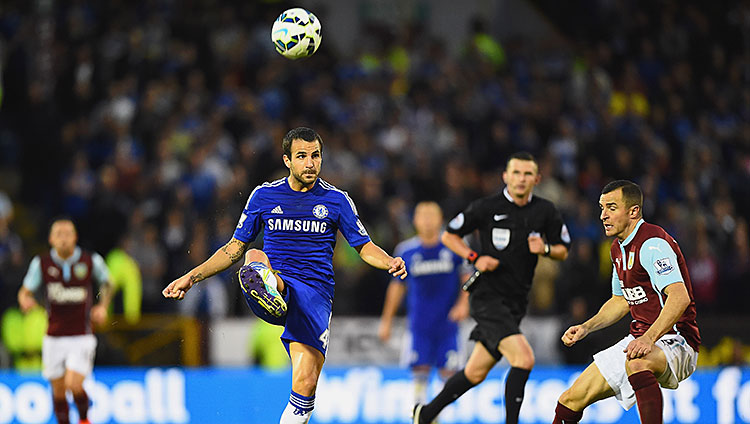 In case you were wondering why your coworkers audibly burst out in a half-strangled gasp at 3:30 p.m. ET on Monday afternoon, they were probably watching Chelsea dismantle Burnley. That’s roughly the moment when Cesc Fàbregas did this.

It’s early in the season for superlatives, but it’s unlikely you will see a more perfect final ball played this year. If you’ve ever heard anyone generally sing Fàbregas’s praises — and a lot of people do — this is what they’re talking about. A late run from midfield to the edge of the box, perfect control of a slightly lofted cross, and then the most beautifully timed and weighted pass you can imagine, slicing open a backline, bypassing half a dozen players, setting up a goal.

Watch a pass like that, and it’s hard to fathom why any club wouldn’t want him on its team. But this summer, Barcelona seemed eager to sell him, and Arsenal waived the chance to buy him back. What were these two usually smart football clubs thinking?

The last three seasons of Fàbregas’s career have not exactly been smooth. He transferred to Barcelona before the 2011-12 season, following a sustained campaign by Pep Guardiola to bring him home (Fàbregas is a product of Barcelona’s La Masia, which he left at 16 for North London). But despite Fàbregas’s familiarity with the club and its style, he couldn’t find room in a crowded midfield that featured Xavi and Andrés Iniesta in their primes and Sergio Busquets emerging as one of the best holding midfielders on the planet.

That left Fàbregas kind of playing all over the place. I’ll let José Mourinho take it from here: “For Barça he was the fake nine, the number ten and winger but I know and he knows what is his best position so he is giving exactly what we need. Quick thinking in midfield.”

Blaming Barça for Fàbregas’s failures in La Liga isn’t totally fair (Mourinho, unfair?!). He was given some opportunities to play in the midfield over his time there, especially recently as Xavi’s legs began to fade. But, even then, Fàbregas and Barcelona never quite meshed. Gerard Piqué, who, like Fàbregas, moved from La Masia to England before returning home, suggested that maybe the stylistic differences between the two leagues were responsible:

In England you have more time on the ball; midfielders, especially those who move between the lines, have more space. There is more freedom to move around, and it is enjoyable as a midfielder.

Fair enough. But that doesn’t explain why Arsenal passed on the chance to bring Fàbregas back to North London. It was Arsène Wenger, after all, who first coached Fàbregas to stardom. If anybody knows how to use Fàbregas, it’s Wenger.

Well, in the years since Fàbregas left, Wenger has filled his position admirably. Aaron Ramsey may play the central midfield position differently than Fàbregas, but he’s no less influential. Fàbregas does his work with the ball, Ramsey does it without. Ramsey is elite at moving into goal-scoring positions from the midfield, and Fàbregas is terrific at breaking down defenses with his passing.

Ramsey and Fàbregas both need a license to roam. If Arsenal had bought Fàbregas, they’d have needed to move either him or Ramsey to a different position.

Fàbregas played a variety of positions for Barcelona but arguably never reached his Arsenal heights. Ramsey can move upfield, but then you get into the domino effect: Where do you put Mesut Özil and the rest of Arsenal’s armada of attacking mids?

In effect, letting Fàbregas go to Chelsea was more of an endorsement of Ramsey than an indictment of Fàbregas. That makes some sense, but it’s probably pretty tough to swallow if you’re an Arsenal fan, especially in light of passes like the one at the top of this post.

This is an ideal situation for Fàbregas. He walked into a Chelsea side where he knows he will start and what he will be asked to do. He is paired with an elite defensive midfielder in Nemanja Matic, who can cover for Fàbregas if he roams and get him the ball in good locations. He gets to play with athletic wingers who are hell-bent on attacking the goal, and a bull of a center forward in Diego Costa, who pushes the defensive line back and creates space for Fàbregas and his creative partner in crime, Oscar, to operate.

It’s been a tough few years for Cesc Fàbregas. He may have finally found a footballing home, in the strangest of places.

"I say to fans, don't worry, because I won't do that anymore," Suarez said. "I spoke to my psychologist, and he said I had to face it and say sorry. I did -- now I would rather focus on the present, which is Barcelona.