A Fate Worse Than Death: Nuggets vs. Jazz 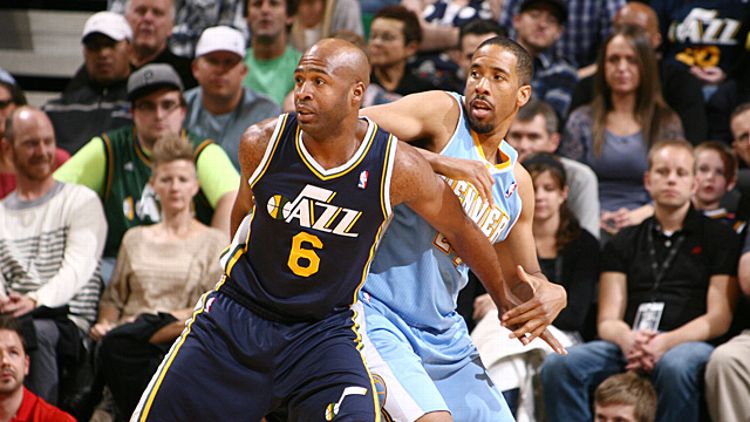 Connoisseurs of basketball misery, pour out a sip of your MD 20/20: For the first time in history, Grantland’s Fate Worse than Death column will not open a new NBA season with a Washington Wizards game. This year, Randy Wittman and the Verizon Center posse decided not to be the last team in the NBA to win a game, so we were forced to abandon the tradition of writing about the Wizards’ first victory of an NBA season. Also, Washington’s 2-4 record is just good enough to fend off inclusion in a series that looks to feature the true dregs of American professional basketball, especially on a night that features the 0-7 Utah Jazz hosting the 1-4 Denver Nuggets. Don’t worry, Coach Wittman — I’m confident that I, you, John Wall, and Marcin Gortat will get to dance the Dougie of despair before season’s end.

Aside from the teams’ putrid records, I was drawn to Monday’s Utah-Denver tilt after reading this description of Nuggets basketball from Roundball Mining Company:

Can we start manufacturing “This is your brain on Nuggets basketball” posters yet? You know, like the ones you saw for the anti-drug movement in the early 90′s with the fried egg? That’s exactly how I feel after watching the Nuggets: completely fried.

Ooh, that sounds nice. Ever since my dad started hiding the hydrocodone from me, I’ve been yearning to get a little numb. Maybe Nuggets basketball can do the trick.

Five games into Denver’s season, the team is already going through an identity crisis. Ty Lawson, its best player, is already explaining that his “level of frustration [is] pretty high” at the Nuggets’ new emphasis at slowing the game down, playing inside-out, and feeding Kenneth Faried and the now-injured JaVale McGee in the post. Apparently, Denver’s front office believes this adjustment will help the Nuggets win playoff games, something they weren’t able to do particularly well in previous years with George Karl’s up-tempo system. One thing the George Karl Nuggets were able to do, however, was simply win games, a riddle this year’s team hasn’t solved.

Coach Brian Shaw seems halfway on board, although some of his recent statements sound as if he promised Nuggets’ management that he could build a winner around the inside presence of Faried and McGee, even though deep down he knew better. “Playing inside-out and throwing the ball in to our big men as a first option is not the most advantageous way for us to play as a team. I understand that,” Shaw told the Denver Post. “But we have to establish an inside game.”

Umm, OK. Tell me once more why your team shouldn’t play in the most advantageous way?

Shaw may feel more freedom to let Lawson and Andre Miller play to their strengths in coming weeks, however, since the Nuggets announced over the weekend that McGee would be out indefinitely with a stress fracture in his shin. That may simplify Denver’s big-man rotation, a five-headed mediocrity beast that includes McGee, Faried, J.J. Hickson, Darrell Arthur, and Timofey Mozgov. They’re like bootleg Voltron. Of course, for me, McGee’s injury was heartbreaking, since anytime you set out to write jokes about the Nuggets, you figure JaVale will just write the thing for you. But even if JaVale can’t help on the court, I’m sure he’ll continue to be a font of positivity in the locker room, where he can bring cheer to his teammates through the magic of Instagram and Mario Kart voices.

It seemed clear from the opening tip of Monday’s game, when Enes Kanter didn’t bother to jump for the ball, that the Utah Jazz know exactly what they are — terrible.

The Jazz are writing this year off and hoping to strike pay dirt in next year’s draft while developing young talents like Kanter, Derrick Favors, Gordon Hayward, and Alec Burks. Or, as GM Dennis Lindsey puts it, the Jazz are in for a “season of discovery.” It could work — Kanter has nice moves and a soft touch with his back to the basket, Favors might mature into a Tyson Chandler–style defensive presence, Hayward looks like a versatile wing scorer, Burks is, ummm, a good athlete, and they possess a slew of draft picks over the next five years. They have a plan.

In the meantime, however, the Jazz are an abomination. Here are a few things I discovered while watching them play Monday night:

Somewhere in the doldrums of the third quarter, during a sequence that consisted of a lot of awkward Rudy Gobert off-ball screens and some Arthur pick-and-pop action, I began to feel the effects of Nuggets basketball. But the Nuggets were not alone. My brain was being fried on both sides — I was the drooling recipient of a Denver Vicodin pellet dipped in a vat of Salt Lake City sizzurp. The illegal screens and fumbled passes and dribbling in circles all started to blend together and wash over me. Brian Shaw, you’re my Dr. Feelgood. Tyrone Corbin, you’re the captain of my #LEANTEAM.

After a while, I needed to stand up and shake out the cobwebs. I paused the NBA League Pass video on my laptop and just happened to capture an Anthony Randolph struggle-face that illustrated my exact feelings at that moment:

In the fourth quarter, Denver pulled away, outscoring Utah 30-13 to cruise to a 100-81 victory and improve its record to 2-4. It didn’t appear to do anything special to close out the game. Lawson used high screens to get into the heart of Utah’s defense and either score his own points or set up easy baskets for Faried and Hickson. Miller scored pretty much at will. And Utah just flatlined. The offense went away from Hayward, and when he did receive the ball, he got called for traveling on a baseline spin and missed a corner 3 in transition. Burks and Jefferson bricked jumpers, a pass went through Kanter’s legs, and suddenly Utah was trailing by double digits en route to its eighth straight loss to start the season.

Mark Eaton, stone-faced and forlorn, watched from the stands. Maybe next year, Mark.