Fourth-and-Short: A Tale of Two Quarterbacks 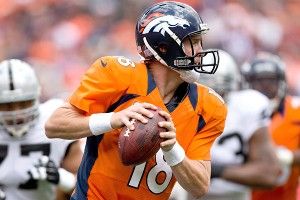 After consecutive losses to the Falcons and Texans in Weeks 2 and 3, the buzzards began to surround Peyton Manning. His statistics — 7.1 yards per attempt with a 60 percent completion percentage — were pedestrian. His shocking three-interceptions-to-the-Falcons game lurked as a sign of how much Manning had lost, an opinion seemingly confirmed when a veteran scout told the NFL Network’s Albert Breer, “Peyton Manning can’t throw the ball anymore.”

And then Peyton went 30-for-38 for 338 yards with three touchdowns and no picks against the Raiders, so all was well with the world. Right?

Those two extremes don’t seem like great representations of Manning, and I wanted to take a closer look at the specific facets of his game and where he might be struggling. So I went back and watched every pass Manning threw during his games against Houston and Oakland to get a better idea of where Manning and his offense were. From what I saw, Peyton Manning can certainly throw the ball. He just can’t throw the ball like he’s Peyton Manning.

The natural inclination in situations like this is to think of the quarterback in question like he’s a pitcher who has lost a few miles off his fastball and make some vague assumption that he can’t throw “the deep ball” or hit some difficult route like a deep out or comeback. That’s not really what I saw from Manning. Manning was capable of making the most difficult throws of the day, but he was inconsistent in a way that I don’t think the old Peyton Manning used to be. He can throw spirals and put zip on his passes, even on the run, but he has to battle with himself to avoid trying to challenge tight windows, and he has throws come out wobbly way more frequently than history would suggest.

One unlucky break for Manning was that several of his more impressive throws against the Texans were wiped off by things that didn’t have anything to do with the quality of his pass. One tight spiral to Eric Decker in the third quarter produced a gain of 36 yards, but it was taken off the books by a holding penalty on the Broncos. Obviously, it’s not like the hold made Manning throw the ball more effectively. A go route to Demaryius Thomas in the fourth that would have produced a touchdown pass was ruled incomplete because Thomas failed to get two feet in bounds. Both those throws were relatively tight spirals placed exactly where they needed to be, nothing that would suggest that Manning had somehow lost his ability to throw.

Manning had another number of throws that wouldn’t have looked out of place in blue-and-white. On several occasions in both games, Manning was able to move out of the pocket and make throws on the run that had his weight behind them, a quality which will be essential to get the most out of the mercurial Thomas. While the fourth-quarter comeback that nearly gave the Broncos a shot to beat the Texans wasn’t quite as impressive as it might have seemed on paper, the aforementioned bomb to Thomas and a perfectly thrown corner route to Jacob Tamme produced big plays on well-thrown passes. It’s hard to find fault with Manning’s touchdown pass up the seam to Brandon Stokley. And this back shoulder throw to Eric Decker was probably a little lower than Manning might have wanted, but it was also in a spot where only Decker had a shot at it.

Other times, Manning atypically left yardage on the field with throws that weren’t quite up to his established standard of performance. His first big pass of the game against the Texans was on a deep post by Decker against single coverage; Manning managed to deliver the ball on time and get it 25 yards downfield with a spiral, but it didn’t have the zip it needed, and required a diving catch from Decker to complete the pass. If Manning hits Decker in stride standing up, the pass might end up going for a touchdown. Instead, Manning has to “settle” for a big gain. Peyton also had several smaller plays, especially in the first half of the Raiders game, where his throws were wobbly enough to cause his receivers to have to slow down or protect themselves to make the catch, without being able to advance it further with yards after the catch. That’s not enough of a problem to write Peyton Manning off, but it’s enough to point out that things might not be the way they used to be.

And, of course, there were certainly a few throws that Manning wishes he had back. Although he didn’t throw an interception against the Texans, that fact represents a small miracle. I counted four clear dropped interceptions by the Texans on the day, including one possible pick-six and two on the fourth-quarter drive that ended with the Stokley touchdown and kicked off the Broncos comeback. Each of them came on passes over the middle on throws where a defender was able to anticipate the throw and either undercut it or was able to attack the receiver at the spot where the ball was thrown. It’s not hard to imagine that the old Manning would have been able to get those balls safely into his receivers’ hands without the defenders being able to get there in time, but it’s hard to say. There were a couple more passes that were either easily defensed or of questionable volition, including the tipped touchdown pass to a triple-covered receiver that served as Manning’s final score against the Texans.

Manning only had one possibly dropped interception against the Raiders, and the difference between those two games is one notable factor as to why I don’t think Manning’s done: strength of schedule! Are we really getting down on Manning after games against the Steelers, Falcons, and Texans? Atlanta and Houston are arguably the two best teams in the league, and the Steelers aren’t exactly chopped french fries and pastrami. The moment Manning got a respite from his tough schedule and got to play a terrible pass defense, he was phenomenal and made the game look easy. Peyton will face one of the league’s toughest schedules this season, but he’s going to look worse against the tough teams than he does against the awful ones, as always. When Manning comes back from his bye and has a seven-game stretch that includes games against the Saints, Bengals, Panthers, Chiefs, Bucs, and Raiders, he’s going to look great.

In truth, the reality is that the Broncos have already adapted the Manning offense from Indianapolis to take some of the strain and stress off of what Manning needs to do. Against the Raiders, virtually every one of his passes in the first half was within 5–7 yards of the line of scrimmage. Unless they have to throw downfield to catch up, the Denver offense mostly consists of screens, swing passes, and pick plays that produce short crossing patterns. You could count the number of times Manning threw more than 10 yards downfield in the air against the Raiders on Sunday on one hand, and it wasn’t because he wasn’t able to; it was because the Raiders played super-conservative behind their pass rush and gave Manning a free checkdown on virtually every play.

Peyton Manning isn’t the same guy he used to be, but the idea that he can’t throw the ball is absurd. Expect the new Peyton Manning to be more inconsistent than the old model going forward, but he’s certainly good enough to keep the Broncos competitive in 2012.

If you watched Tony Romo toss up his handful of interceptions on Monday night — five on paper, but really four with a fumble that was caught in the air — you got a reminder that all interceptions aren’t created equal. When Dez Bryant failed to make a sight adjustment on a Bears blitz and Romo threw to him as his “hot” read off the blitz, Charles Tillman was gifted the easiest pick-six of his career. As Romo moved deeper into debt as the game went along, his decisions weren’t quite as impressive, and he forced his final two picks of the night.

With that thought in mind, I think it’s important to break down Russell Wilson’s three picks from Sunday’s loss to the Rams. Wilson’s job security has come into question just one week after beating the Packers on Monday Night Football, and much of that owes to those three interceptions. How much of those three picks were really Wilson’s fault, though, and what do they say about Wilson’s immediate future in the starting lineup?

The first interception is actually the most interesting of the bunch, as it bears the most meaning for the future. The third-down play actually produces an open receiver very quickly, as Doug Baldwin lines up in the slot and runs an option route against zone coverage before settling in a hole. For a veteran quarterback who can proceed through his reads quickly, it’s an easy checkdown for a first down; for Wilson, though, that’s not the case, because he actually can’t get a good throwing lane to Baldwin. That throwing lane is clogged by defensive lineman Eugene Sims, who doesn’t actually rush the passer but instead sticks around at the line of scrimmage to try to get in Wilson’s line of sight. A quarterback with prototypical height and a higher release point would probably have been able to throw the ball over Sims and pick up the first down, but because Wilson can’t generate that angle inside the pocket, he has to take a step or two to the left to create a throwing lane to Baldwin. Because Wilson does that, the Rams have enough time to descend on Baldwin, who hears footsteps and lets the pass go through his hands and into the arms of Trumaine Johnson. The ball is slightly behind Baldwin, but it’s a catchable pass.

The second throw seems like more of a random occurrence than it actually is. Someone viewing with rose-colored glasses might see the pass and note that Wilson was hit just as he released and didn’t intend to basically offer up a fair catch opportunity for the St. Louis defense, and that’s all true. On the other hand, Wilson is only hit by blitzing cornerback Janoris Jenkins after Jenkins has had time to try to rush the passer, get engaged by Marshawn Lynch, and then throw Lynch aside to make the sack attempt. It’s a throw that needs to be out earlier, plain and simple, against a big blitz like St. Louis’s.

Finally, the game-ending final pick of the day had little to do with Wilson at all. Receiver Anthony McCoy slips (or is possibly partially tripped) coming out of his break, and when Wilson tries to lead him with the throw, Bradley Fletcher comes up with the game-sealing interception. Replacing Wilson with Matt Flynn or Lara Flynn Boyle would accomplish nothing in preventing that interception from occurring. Sometimes, you just have a guy fall down at the wrong time.

For me, it’s hard to imagine how the Seahawks could see how Wilson played on those three picks and order for him to be replaced. Drill him to get the ball out quicker against big blitzes, give him a few more plays with designed motion out of the pocket to create new throwing lanes, and hope that he forgets every mistake by the time he’s back at practice on Monday, but Wilson didn’t do anywhere near enough to earn a benching on Sunday.

About Last Night: Oh, No … Romo