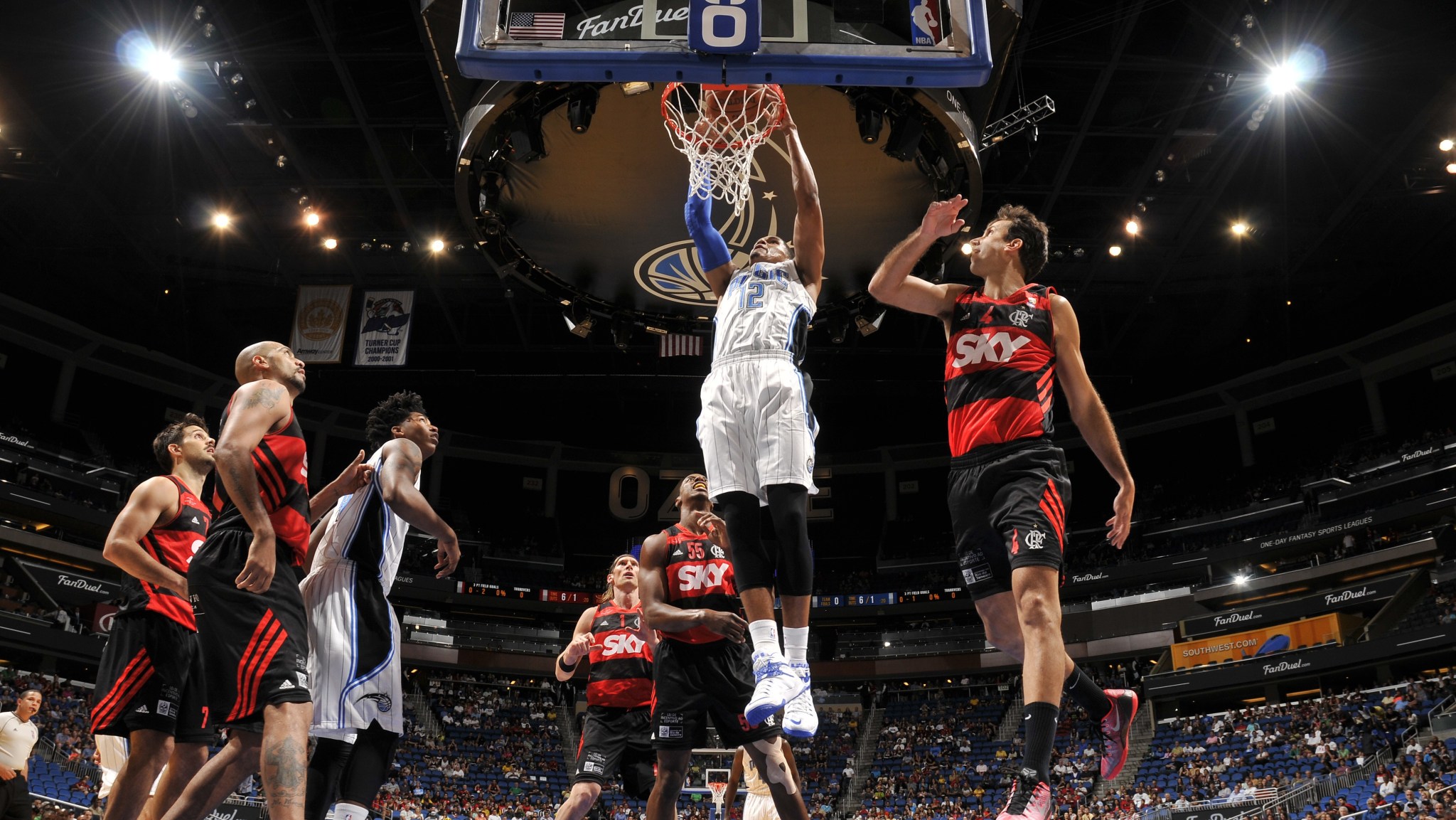 The NBA has struck a groundbreaking partnership with Brazil’s top domestic basketball league in which the two will share best practices, marketing strategies, and player development techniques, per sources familiar with the situation.

The goal of the NBA’s partnership with Liga Nacional de Basquete is to increase the sport’s profile in Brazil, deepen cooperation between the NBA and top FIBA leagues, and expand the NBA’s international brand. The agreement could be announced by early next month, and the NBA will likely obtain an equity stake in the LNB as part of the deal, per sources.

The deal will likely have the NBA sending both cash and people into Brazil for at least two years. The LNB was formed in late 2008 as a way of placing the top 16 Brazilian teams under the same competitive umbrella.

This is a stand-alone arrangement, but it falls within the larger context of the NBA’s quest for global sporting dominance and potential interest in eventually unifying the sport at the highest level under one set of rules. That may not ever happen, but it is an idea with some traction at NBA headquarters and elsewhere around the world.

Top NBA officials are on record about the possibility of adopting several FIBA rules, including the more liberal basket interference policy and a ban on live-ball timeouts late in games. The latter would help the NBA reduce game length, a concern that drew renewed attention this month, when the Nets and Celtics played an experimental 44-minute game in Brooklyn. The game clocked in at just under two hours, about 15 minutes shorter than the average locally broadcast regular-season game and 25 to 30 minutes shorter than the average playoff game.

• Concern over the potential irrelevancy of historical statistics based on the 48-minute game model.

• A sense that fans simply are not complaining about the length of NBA games; any such complaints might be isolated to the start-and-stop nature of NBA crunch time.

• A related belief the NBA could slash game length through a bundle of smaller measures instead of scrapping the 48-minute game length. Those might include a reduction of timeouts; an assurance that a 20-second timeout lasts only 20 seconds; a ban on live-ball timeouts and consecutive timeouts during crunch time; less instant replay; and other little things.

• A belief that if the NBA is interested in saving players some wear and tear, it should prioritize reducing the length of the season over any tiny cut in game length.

• Widespread skepticism that the NBA would ever do anything that risks a reduction in revenue. Moving from 82 games to some lower number would vaporize a bunch of game-day gate receipts, cut valuable inventory for local TV carriers, and reduce some in-game and arena sponsorship opportunities. Players and owners split revenue almost 50/50.2 A decrease hurts every stakeholder who would need to approve such a drastic change in NBA working conditions.

Shrinking game length would reduce the number of advertising windows TV networks could offer, threatening the overall advertising bonanza that drives the value of the NBA’s national TV contracts. Nobody is going for this stuff, right?

Perhaps. But the uproar over the 44-minute game struck me as shortsighted, and the NBA’s partnership with Brazil’s top league might be a small signal the issue is not going away. As I reported last year, Adam Silver and other top NBA officials are at least curious about the 40-minute length of FIBA games.

Shorter games would mean fewer advertising windows in a very literal sense, but that doesn’t necessarily translate into a long-term revenue reduction or unanimous opposition from network executives. Scarcity can increase per-minute value, especially if ratings go up.

There is some belief within the NBA that brisker games could indeed prove more popular among younger fans. Shorter games might also prove to be more unpredictable, since the favorite would have about 15 fewer possessions with which to assert its superiority. Unpredictable games generally rate well, and the NBA is (rather easily) the most predictable of the four major U.S. sports leagues on a game-to-game basis. Unpredictable games could also hold eyeballs longer, making the first quarter seem less of a throwaway to casual fans who might tune in only for crunch time.

There are a lot of “ifs” and “coulds” there, and that’s kind of the point. The media landscape is going to evolve over the next 10 or 15 years in ways we cannot understand or anticipate now. Hell, even the most bullish educated guesses underestimated the value of the league’s new national TV deal by about $500 million per season. It would seem very hard to say definitively today that shorter games would result in a drop in overall revenue.

The league’s TV partners aren’t universally opposed to shorter games, either. There is a real benefit to networks when they can slot a game into a specific prime-time broadcast window with some degree of certainty. Each NBA game is different, and no matter how the league tightens its product, some games will spill over that magical two-hour broadcast window the Celtics and Nets hit a week ago. There will be overtimes, free throws, and instant replays.

Rod Thorn, the league’s president of basketball operations, hinted in an interview with the Wall Street Journal at the notion that TV networks might indeed have some interest in a shorter game:

“You know something, that’s part of it,” said Thorn. “There’s no doubt about it. You want it to fit in in a way that does not detract from the game, and also, fits into a TV time slot. You’re really looking at two things. But what we don’t want to do is something that detracts from the actual playing of the game”

The NBA’s board of governors approved a spate of rule changes last week that in the aggregate expand the use of replay. This is part of the appeal of the 40- or 44-minute game: replay isn’t going away, and it will likely become an even larger part of the game over the next decade. The league can enact a few time-savers, including a ban on live-ball timeouts, but any expansion of replay — even with the league’s new replay center — might offset those and leave us in the same place.

It may be that the only guaranteed way to make games shorter is to actually make them shorter. Even the concern about marginalizing bench players can be spun the other way. If the Cavs and Thunder met in the Finals, how insane would it be if we could watch Kevin Durant, Serge Ibaka, and Russell Westbrook battle LeBron James, Kevin Love, and Kyrie Irving for the entire game?

It’s unpleasant to think about what that kind of shake-up might do to the salaries of players who make up the bulk of the union, but the league office has to at least think about whether a shorter game heavier on star minutes might be even more popular than the current product. It would conveniently dovetail with the NBA’s dream of a hard salary cap: spend on stars, skimp elsewhere.

On the flip side, the league could eventually reach a new normal in which stars might play the same percentage of time in a 40- or 44-minute game as they do in today’s 48-minute version.

None of this is to say these major changes are happening, or even likely to happen. It’s always wise to bet on the status quo, especially when the status quo is doing pretty damn well. That is a big part of why lottery reform lost last week. But it won’t surprise me if and when these discussions go in directions we don’t see coming today. In 20 or 25 years, maybe reducing the length of the season and slashing game times doesn’t have to be an either-or proposition.

The Brazil partnership isn’t primarily about any of this stuff. It is a money and influence move similar to other NBA initiatives outside the U.S. But it is a sign that international cooperation will deepen going forward, and a slow unification of rules might be part of that process.

The union under Michele Roberts, its new executive director, is also expanding its vision to non-NBA leagues, Roberts told me during a long sit-down at her office earlier this month. Lots of NBA expats land in leagues all over the world every year, and they play alongside younger players who will come here at some future time. Roberts wants to strengthen the relationship between the players’ association and international leagues and unions, she says. She wants to investigate global working conditions and opportunities for reciprocity.

Changes will happen, including some we don’t expect.

The Last Complete Contender Falls Back to the Pack: Your Weekly College Football Wrap