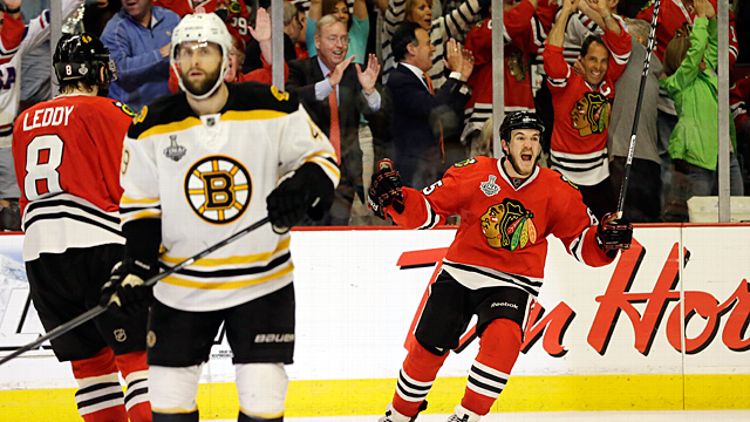 What do you do when you’re completely exhausted? Me, I get cranky. My eyes redden, my skin sags, my temper shortens, and everything seems like a much bigger deal than it probably is. Small tasks become grand impositions. Minor snafus seem life-ruinous. Overheard conversations feel intolerable. I begin considering Joffrey Baratheon in a more sympathetic light.

As for the Chicago Backhawks’ Andrew Shaw? Him, he drops F-bombs on national television. He sits down at a press conference behind the wrong placard, one that says “Jonathan Toews,” and he seems content not to care. (You can’t say as much about Toews, who notices almost immediately and swaps the two name tags so that everything’s where it should be.) And, when asked to walk everyone through the triple-overtime goal that he had scored for the 4-3 win against the Boston Bruins in Game 1 of the Stanley Cup final on Wednesday night, Shaw can only explain, “Luck.”

He wasn’t being humble, just accurate. His game-winning goal was scored when Blackhawks defenseman Michal Rozsival took a long shot from near the blue line that caromed first off Dave Bolland and then finally, fatefully off Shaw.


It was right around midnight in Chicago, on a evening so stormy that pictures of lightning had cropped up on Twitter, and thunder could be heard from within the already rumbling United Center. The Blackhawks and Bruins were just 7:52 away from completing a third overtime — the equivalent of two full 60-minute games. (The box score ultimately resembled something from baseball.) The crowd, at turns boisterous and silently tense, had just broken into a tentative chant: “LET’S GO HOME.” I was thinking to myself that they better be careful what they wish for, lest Boston be the team to send everyone to the exits, when Rozsival took the shot and it ended up getting past Boston goalie Tuukka Rask and into the net. That’s the beauty of overtime hockey: It has to end sometime, it’s just impossible to know when that sometime will be.

Whether it was the stakes, or the longer-than-usual break, or the small inconveniences of having to procure and arrange tickets to the final for friends and faraway family (pretty much every Chicago player at Media Day on Tuesday mentioned that last part, as did the L.A. Kings players last year; it must truly be an unwinnable drag to deal with), the Blackhawks did not get off to a start that satisfied them. By the end of the first period, the Bruins led 1-0 off a Milan Lucic wrist shot, and less than a minute into the second, Lucic scored again to give Boston a 2-0 advantage.

Calder Trophy finalist Brandon Saad (who, truth be told, kinda rocks the Patrick Kane Playoff Mullet better than Kaner himself) cut Boston’s lead in half a few minutes later and sparked an offensive frenzy by Chicago. When the Bruins’ Patrice Bergeron scored on a power play 6:09 into the third to give Boston a 3-1 lead, however, it didn’t seem like the Blackhawks would be able to mount a comeback, especially with Rask in net. But then a “terrible turnover,” in Rask’s words, by Torey Krug led to a Bolland goal. A few minutes later, a slap shot by Johnny Oduya hit off Andrew Ference’s skate and slowly slid into the net. There was that ol’ luck again, tying the score.

The first overtime was playoff hockey at its best. On a night that had begun with an annual “state of the league”–style address by Gary Bettman — in which the commish heaped praise on NHL fans, cast some doubt on the future of the Phoenix Coyotes, remarked that NHL revenues were exceeding expectations, and confirmed that, yes, he’ll still be handing out the Cup, boos be damned — there was, ultimately, no finer talking point or advertisement for the league than a 3-3 overtime Stanley Cup final game.

Rather than sit back and try not to make a game-ending mistake, both teams went for it, resulting in some extraordinarily fun (and frightening) play. Even Shawn Thornton nearly scored on a rush. Chicago goalie Corey Crawford faced 12 shots in the first overtime, more than he’d faced in any other period throughout the game, as my Twitter feed morphed into a delightful series of dispatches from hockey-watching newbies trying to come to grips with the near-tantric anxiety of playoff sudden death.

Somewhere late in the second overtime, though, we crossed the Rubicon into exhaustion. Have you ever played one of those games of Beirut where both teams have only that last cup left, but no one can hit the damn thing to finish the game? It began to feel a lot like that: the loopy, almost drunken loping around (at one point Michal Handzus got so spun out of sorts that it looked like he was purposely practicing pirouettes), the near-misses (just ask Kaspars Daugavins), the creeping sense of OK, let’s end this thing. It wasn’t just on the ice. Kids fell asleep on their parents’ laps. Reporters went from panicking about print deadlines to tasting the sweet freedom of blowing them entirely.

That the game lasted so long, with Chicago and Boston pushing and not sitting back, was a testament to the skill and poise of both teams; it may also portend a long, close series. At least, we can all hope.

For now, everyone — players, fans, me — is just glad that we have two days off to recover from a satisfying but draining Wednesday night. In the Blackhawks locker room after the game Crawford moved around gingerly; Duncan Keith, who logged more than 48 minutes of play, began his interviews standing, took a seat, and ultimately had to indicate he was done. Everyone understood. Shaw cursed on live TV and was later asked about it. He smiled mischievously. “Slip of the tongue,” he said. “I couldn’t think at all actually — could barely breathe. I think I made up a word in there, too, actually. I was never good in English.”

An internal media-training switch seemed to flip, and he settled back into platitudes. “Just shows how much heart our team has,” he concluded. “We push each other to our limits.”

“We’re obviously feeling pretty good about it,” said Toews, his forehead bright red after having spent such a long time under a helmet. “But it’s time to go home and get some rest now.”