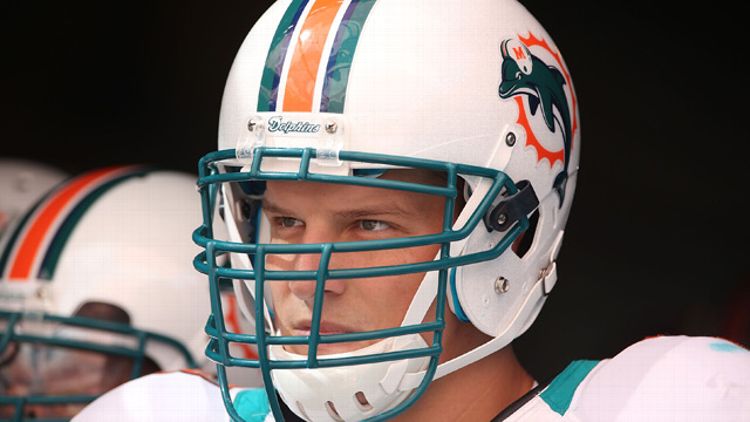 Reminder: These pieces are designed to be from the perspective of an agent trying to hype up his client as the latter is about to hit free agency. My goal in writing these isn’t to be accurate (or lie), but instead to employ whatever arguments I can to make the player in question look as valuable as possible. For more background, see this week’s pieces on Reggie Bush and Danny Amendola and last year’s introductory piece to the series on Mike Wallace. Today’s free-agent target: Jake Long.

Franchise left tackles don’t hit the market very often. Tackles like Jake Long? They’re an even rarer breed. Long isn’t merely a franchise left tackle; he’s a retired-number left tackle, the sort of guy whose name will end up on the façade of your stadium by the time his career is over. There are few tackles in the history of football with his college pedigree and professional success at such a young age, and those tackles own more than their fair share of ugly mustard jackets. Jake Long is a scheme-independent, all-purpose superstar left tackle who is about to enter the prime of a Hall of Fame–caliber career.

It’s difficult to quantify the impact of an individual offensive lineman upon a team, but there are some measures of performance and quality that show off just how impressive Long has been. Let’s start with one simple indicator: Pro Bowl appearances. Long has been in the league for five seasons, and the NFL family has seen fit to place him in the Pro Bowl on four occasions. The only time he failed to make the Pro Bowl was in 2012, when he missed four games after trying to play through injuries.

Four Pro Bowl appearances in five years is an extremely impressive rate of return for a left tackle, especially one who has spent his career going up against the exotic blitz packages of Bill Belichick and Rex Ryan in the AFC East. The only other active tackle to make at least four Pro Bowls in his first five seasons is Joe Thomas of the Browns. The last player before Thomas to pull off that feat was Jonathan Ogden, who is now a Hall of Famer. Before him was Tony Boselli, who would have made the Hall of Fame if not for a series of injuries. And before Boselli was Willie Roaf, who also made the Hall of Fame. As it turns out, 14 tackles have pulled off this four-in-five feat, and of the 12 who are eligible for the Hall of Fame, seven have been honored in Canton. Even the players who haven’t received football’s highest honor continued on to stellar careers, to which the likes of Richmond Webb and Chris Hinton can attest. These are the elite of the elite, the true superstars of the game. Players like this simply don’t hit the market in their prime.

Long is a rare exception to the rule, of course, because he struggled with injuries during the last two seasons. There’s no reason to hide that, because there’s nothing to hide. Long is a warrior, a player who suited up through pain for a team that was going nowhere because it was the right thing to do. He has already delivered after receiving one large contract; unlike with some other tackles on the market, you don’t have to worry about Long’s effort waning once he gets a new deal in free agency.

The injuries that were bothering Long are gone; he received a clean bill of health from the most respected independent voice in the field of sports medicine, Dr. James Andrews, who said that Long is “the kind of kid you want. I’m not worried about him at all.” Jake Long doesn’t turn 28 until May 9, and any team that chooses to sign him to a long-term contract can rest easy knowing that Long will be able to play through the end of any deal. There are many more trips to Hawaii in his future.

And on the field, Long is a mauler who can do anything an offense demands. He has blocked for disparate types of running backs, from Ricky Williams to Reggie Bush and in between. He’s capable of going it alone on an island and taking on the opposing team’s best pass rusher one-on-one every week, which allows your offense to take a tight end or running back and use that player as a receiver or help somewhere else on the line. Furthermore, Long is a disciplined player; he averages just less than three games per penalty, and he committed just one false start and two holding penalties last year. He also only allows about one sack every three games, and that’s come with a mix of underdeveloped and inexperienced quarterbacks like Matt Moore and Ryan Tannehill. During his lone season with a healthy, competent veteran quarterback (Chad Pennington) under center, Long allowed just 2.5 sacks.

The other great thing about adding an elite left tackle to your lineup is that you’re not just improving at one position. In reality, you’re upgrading seven spots in your lineup by adding Long. One, obviously, is left tackle. By adding that dominant left tackle, though, you also improve the performance of your other four offensive linemen. Think about this year’s Super Bowl–winning Baltimore Ravens, who added left tackle Bryant McKinnie to the lineup before the playoffs and proceeded to get a great four-game run to the Super Bowl. McKinnie allowed players who were stretched at their previous spots to move into less demanding roles where they were able to thrive. Michael Oher is a better right tackle than left tackle, for one. Long’s arrival in town will allow you to shuffle your line and produce multiple upgrades up and down the trenches. That creates better running lanes for your halfback and more time for your quarterback to find an open receiver.

There’s another player with a Pro Bowl pedigree at a critical position who hit the free-agent market at a time when teams questioned his health. Like Long, Drew Brees had an injury to his upper body; he entered free agency with a torn labrum in his shoulder that caused organizations to wonder whether he would be the same player again. Despite the fact that highly respected Dr. Andrews operated on Brees, the Dolphins passed on Brees and allowed him to go to New Orleans, where he revitalized a city and won a Super Bowl. That was the last time a player as talented and valuable as Long was allowed to hit the free-agent market. Virtually every team in football looks back at that offseason and wishes it had been smart enough to sign Brees. Hindsight is easy. Long is your chance to apply foresight and acquire a Hall of Fame–caliber talent without giving up a single asset. Signing Jake Long isn’t a risk. It’s an incredible opportunity that 31 franchises will regret passing up on. Don’t be the Dolphins. Be the Saints.