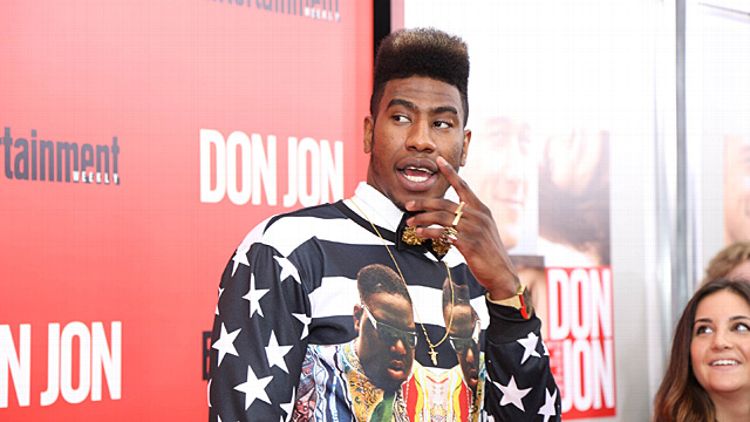 With apologies to Charles Oakley, I feel pretty comfortable stating that Iman Shumpert is the coolest New York Knick since Clyde Frazier. Between his easily nicknameable surname (“Shump”); his invention of #KnicksTape (which eventually spawned this picture of Knicks coach Mike Woodson); and that even while injured, Shumpert was New York’s pregame pump-up circle guy on a team that featured the godfather of pregame pump-up circles himself (Rasheed Wallace), it’s really not even all that close. (Shumpert’s go-to move was to get down on the floor in the middle of the circle, write both “NYK” and the opposing team’s initials in script with his finger, and then stomp on the opposing name.)

When Shumpert started referring to himself in the nickname-ified third person (e.g., “Shump Shump ain’t touch you” after being accused of fouling a teammate during practice) and telling assistant coaches “you don’t want these problems” while miked up during training camp his rookie year, it quickly became apparent that he was not lacking in confidence.

Though Shumpert flailed away as a point guard through the first part of his rookie season, his game flourished when he moved off the ball in the wake of Jeremy Lin’s emergence. After that, Shumpert began routinely locking down the opposing team’s best perimeter player. His best game of the year came in early April, when he played 45 of 53 minutes, scored 15 points, grabbed nine rebounds, dished out six assists, and recorded four steals while hounding Derrick Rose into an 8-for-26, eight-turnover performance in a 100-99 Knicks’ overtime win.

While rehabbing the torn ACL suffered in Game 1 of New York’s first-round loss to the eventual champion Miami Heat in 2012, Shumpert — under the pseudonym 2wo 1ne — recorded and released a full-length mixtape titled Th3 #Post90s, and it was actually pretty good. He’s got better flow than any non–Stephen Jackson NBA rapper, which he proved in his follow-up, a Knicks-themed remix of the Kanye/Jay Z/Big Sean track “Clique.”

That was all just prelude to his performance in the 2012-13 regular season, during which he showed up with a flattop haircut, played mostly stellar individual defense, and became a deadly 3-point shooter. Never a strong outside threat at Georgia Tech, Shumpert shot just 30.6 percent from 3 as a rookie. But after shooting 35.1 percent from deep in the last 30 games of his rookie season, Shump spent the majority of his rehab time hammering out the hitch at the top of his jumper and came back with a much smoother form. The result was a season shooting 40.2 percent from beyond the arc.

In the playoffs, there were stretches during which Carmelo Anthony was ineffective and Shumpert legitimately looked like New York’s best player. A few hours before the clock struck midnight and the date changed to May 8, I was in the Garden when Shumpert gave me the best early birthday present ever.

That it happened on the 18th anniversary of “eight points, nine seconds,” in a game being announced on TNT by Reggie Miller, just made it that much better.

Shump kept himself busy this summer. First came the news that he’ll appear on Michelle Obama’s forthcoming hip-hop album. Then, after Kendrick Lamar proclaimed himself the king of New York on Big Sean’s “Control,” the first New York rapper to respond was Shumpert. His “Dear Kendrick” freestyle came out within 24 hours, and unofficially became the first rap song to name-drop Phil Jackson, Janet Jackson, Batman, Mike Woodson, and Arnold Schwarzenegger in the same verse. The day after that, he posted an Instagram video in which he had a blond streak in the middle of his flattop.

With Woodson openly auditioning candidates for his starting spot (apparently J.R. Smith’s Sixth Man of the Year hardware, new contract, and pot suspension weren’t enough reward for his performance last year), Shumpert came out and made all seven of his shots in New York’s first preseason game — nailing jumpers off the dribble, taking it strong to the rim, and making me change my official stance from “preseason doesn’t matter” to “preseason doesn’t matter, except when Iman Shumpert plays really well.”

After the game, he told reporters: “That’s how I play. I ain’t going to be quiet about it no more. That’s just how I play.” More: “I changed when I came into the league trying to be quiet and feel my way around. But I’ve been around a little bit now. I’m just going to do how I do. Makes me more comfortable.”

Then there was this, as heard on MSG’s broadcast of the following game:

"Iman is amazing. I think he's the best shooting guard in the league." – Ron Artest

Jared Dubin works for Bloomberg Sports, writes and edits for the ESPN TrueHoop Network sites Hardwood Paroxysm and HoopChalk, and is coauthor of We’ll Always Have Linsanity.

Week 6 Fantasy Football Review: No, You Can't Un-Draft These Guys