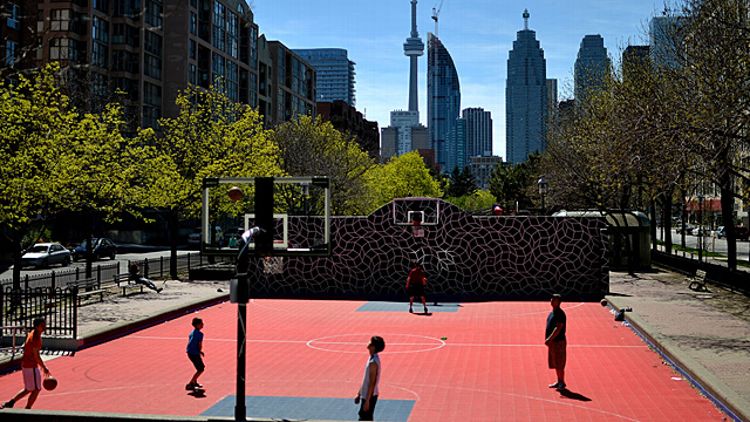 While most sane Americans are busy trying to, you know, avoid sundeath, pickup basketball continues apace in steam boxes and on sun-scorched pitches the nation over. They come looking for simple glory, a good workout, and a little bit of community. They do things with their bodies unwise for people without health insurance, and constantly leave their empty Gatorade bottles on the ground. Whether you’re a daily regular, weekend warrior, or an “I haven’t exercised in three months and this seems like the fastest way to puke myself back into shape,” streetball etiquette is a fairly easy code to grasp. But that doesn’t mean it’s without its more hidden tenets. Here are 10. Here are 10 tenets I made up.

This is a sensitive subject. Certainly there are occasions where mesh tops of the classic (see: Erving, Dr. Julius), hip-obscure (Barnes, Marvin), or nondescript rec league varieties come off as benign. This is rare, however. For the most part, wearing a jersey is a sign of either extreme ability or terrified feebleness. In your case, it’s probably the latter. Specifically, I would sincerely advise against sporting any of the following jersey vintages: Jack Sikma c. 1986, Clyde Drexler c. 1992, Kenny Anderson c. 1991, Allen Iverson c. 1996, Danny Fortson c. 1996, Keith Van Horn c. 1997 (reversible; practice), and your middle school game jersey. I have firsthand experience with the last four. My nipples were chafed almost as bad as my feelings. Hearing “Andre Miller was the key to that team!” will do that to a man.

No three-hour run or seven-game win streak is worth having to place your detached foot into your duffel bag. Even if you have to have mom airmail you your too-small, mold-covered Pennys from seventh grade and lose a couple toenails, at least you’ll be getting some semblance of support. There’s a reason why the speed of the game has grown in lockstep with the footwear: Back in the ’60s and ’70s, they weren’t avoiding violent cuts and weird, spinning landings because they didn’t know how. They avoided them because they valued being able to walk.

“But this is what Holcombe Rucker wore back when he started the Ruck—” Stop it. You look like an asshole.

I realize this applies to roughly 2 percent of the basketball-playing population, of which I am a long-standing soldier. I also realize that contacts and Lasik surgery exist, and have existed for quite some time now. I also have no idea how to change the oil in my car, which should give you a pretty good idea how eager I was to stab flimsy pieces of weird plastic chemicals into my eyeballs. I got a lot of “RAM-BIS!” chants in high school. RAM-BIS chants feed me.

Anyway, avoid wearing glasses — even with a headband. As someone who’s had a dozen or so pairs snapped, smashed, crushed, and melted by elbows, jaws, stanchions, and open palms, having your vision compromised for an hour or two is a much better proposition than footing half a week’s pay for a new pair. Or worse, walking your broke ass around for months with duct-taped hinges the size of june bugs, looking constantly lost. Just aim your shot or pass for the most vaguely familiar blob … somewhere over there. Not like anyone takes jump shots anyway.

This mostly applies to white and/or translucent people. I happen to fall in the latter category, for whom any more than 45 minutes of continuous sun exposure can result in acute radiation poisoning. Doesn’t matter; leave the Banana Boat at home. First off, no one wants to post up a giant, flailing salamander. Second, it takes only a dab of that shit to turn the ball into a wildly unpredictable weapon. Third, anyone who’s ever gotten sunscreen in his eye knows how miserable that can be. Just last weekend I left a short boat trip and drove 30 miles home with only one eye open, moaning loudly the entire way. It’s a minor miracle I didn’t get pulled over. Even if you have to pay some child $5 to constantly douse you with water during breaks in the action, it’s worth it.

A YouTube collection of behind-the-back pickup passes gone awry, if someone ever were to make it, would turn basketball Twitter into antimatter. It would receive 3 billion views and be a thousand hours long. The reason has to do with pickup’s very pace; it’s like watching the NBA, if the NBA’s shot clock were nine seconds. Every player inevitably finds himself in a situation — a fast break, usually — where a deft cross-back flick is all that stands between you and the bucket. The following are the four most likely outcomes of this scenario, together with the odds of each happening:

Do everyone a favor and just miss the layup.

I cannot stress this enough, people. Until you’ve blacked out driving home from a pickup run and vomited your brain into the bathtub, you don’t understand basketball heatstroke. Funny thing is, I thought I was taking sufficient swigs in between games. I was not. Even if you drink so much you have to pee down your own leg in the middle of a 15-14 game, do it. That means you’re hydrated. And it’ll evaporate anyway. Trust me, the last thing you want is Grounds and Roads sending in a snowplow to scrape baller jerky off the asphalt. Obamacare does not cover this.

7. Don’t Ask What the Count Is

The statute of limitations here depends largely on where you are. In some places, games roll at a casual enough clip that asking the score isn’t too big of a deal. In others, doing so is frowned upon, albeit passive-aggressively. Doing it after literally every basket will lead the host players to conclude one of two things: (1) you’re too busy worrying about not getting embarrassed to know what’s going on, or (2) you’re stoned. In either case, you will be jumped on like a full-fed carcass in a famine. Put on your big-boy pants and remember how to count to 15.

“ … That’s the dumbest thing I’ve ever heard. Why can’t you wait until after you lose to smoke a cigarette?”

Good point, fair question. I myself have done this only a handful of times. For some people, however, it’s something of a ritual. Teams made up exclusively of these players seldom do well, and anyway you should reserve the sating for after the losses. You shouldn’t be smoking at all, really. It’s seriously bad for you. But if you’re going to do it, do it after you cost somebody money. Just like dinner or sex.

The quickest path to blacktop respect is slicked with blood. Pretty sure that’s how that saying goes. “Call your own” doesn’t so much guarantee fairness as prevent total chaos and violence. I can count on two hands and a foot the number of times I’ve actually yelled for a foul in a streetball game, and they were all called against good friends I was actively trying to antagonize. You’ve seen this dude a thousand times if you’ve seen him once: “I GOT HIT!” every time the tip of a shoelace brushes across his forehead. Hell, if you survive enough forearms to the teeth without calling anything, they might even start whistling themselves. Unless the stakes of the game are houses, cars, or humans, this typically tends to even itself out.

Look, just because you’ve seen White Men Can’t Jump doesn’t mean you’re good at getting into people’s heads. I PROMISE you you’re not. Streetball trash talk is as fickle a skill as a fast-break lob; the masters become so by dint of sheer, painstaking practice. Besides, by the third or fourth game you’ll likely be spending your off-the-ball time choking back lung-vomit anyway. Until you can successfully run a half-marathon while reading the entirety of 1Q84 as loud as you can, just … defend and rebound. Save your breath for when you have to politely ask the army of 5-year-olds playing at the broken 8-foot rim over there to please give you your ball back.

Happy 50th Birthday, Karl Malone! Here Are Some GIFs of You!