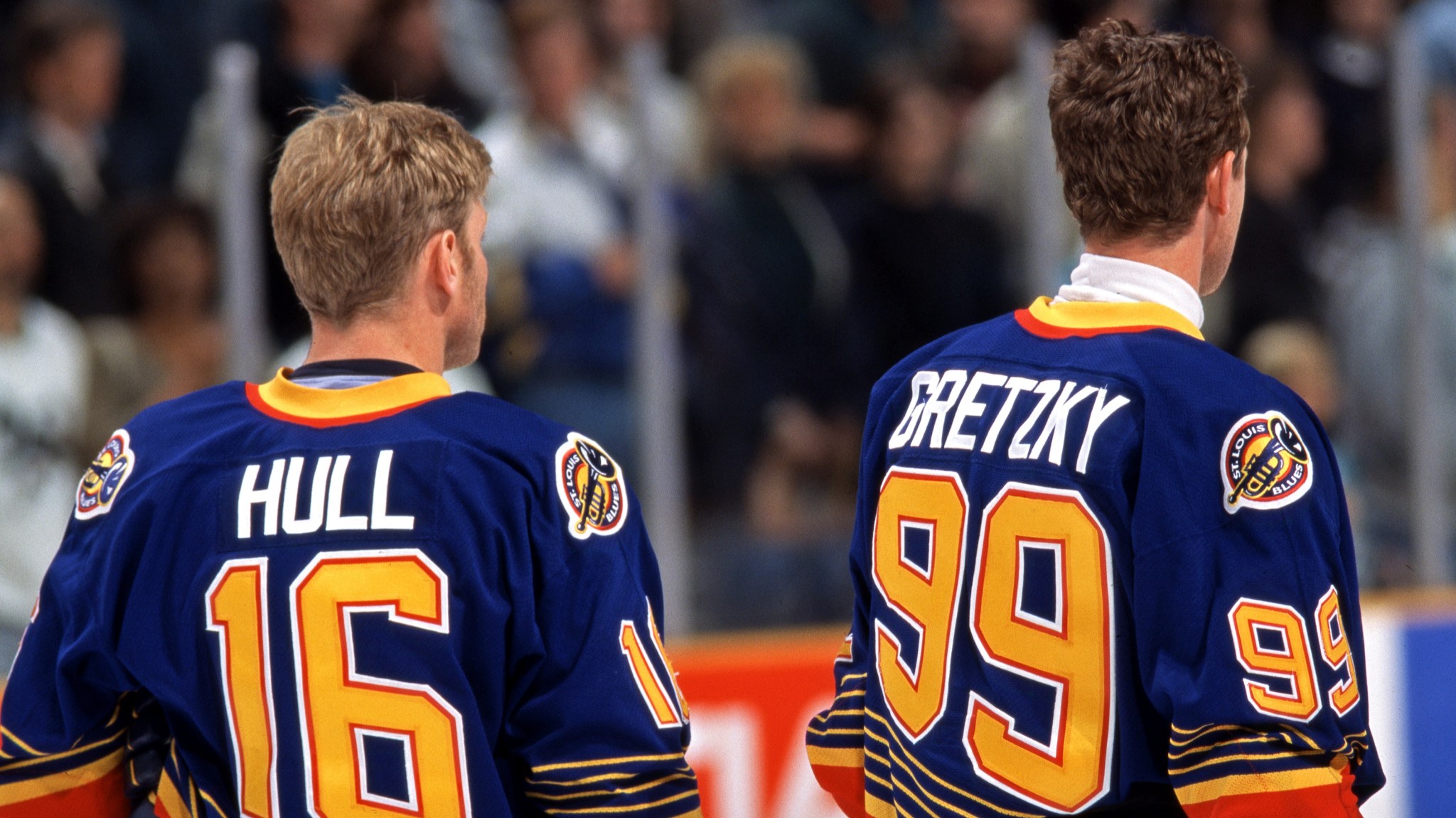 10 Facts About a Fun Team is a new feature in which we’ll take a look back at a notable team and season from NHL history. That team may have been good. It may have been bad. But it was definitely interesting, and as such it deserves to be remembered.

The signing seemed like a curious decision, and one that was somewhat out of character for a Blues front office that’s spent years patiently building a legitimate Cup contender. The last time they tried to get fancy was the Ryan Miller trade and that didn’t work out well, so you figured the Blues would go back to being, well, the Blues.

But there was a time almost two decades ago when this kind of move — bringing in an aging, Hall of Fame–caliber veteran with a big name that he made elsewhere — was pretty much the Blues’ trademark. And during the 1995-96 season, it led to the creation of one of the most fascinating teams we’ve ever seen.

Of course, that year’s team had what we could politely call a “unique” vision at the top of the org chart. We might as well start there.

We need to start here, because all the madness that follows springs directly from Iron Mike.

The 1995-96 season was Keenan’s second as the coach and general manager of the Blues. He’d jumped to St. Louis after winning the Stanley Cup with the Rangers in 1994, citing a technicality in his contract and kicking off a debacle that ended up getting him suspended for 60 days. That suspension, and the half-season lockout that followed, prevented Keenan from wreaking too much havoc on the Blues roster.

The next year was different. With a full offseason to play with, Keenan went to work. He traded Brendan Shanahan for Chris Pronger. He signed Grant Fuhr as a free agent. He signed Shayne Corson, too, losing Curtis Joseph to the Oilers as compensation in the process. And a few weeks into the season, he stripped Brett Hull of his captaincy and gave it to Corson.

Hull didn’t especially appreciate that last move, and it set off a feud with Keenan that would be one of the dominant subplots of the season. Hull was the best player in franchise history and would go on to record his seventh consecutive 40-plus-goal season (not counting the lockout year), but Keenan didn’t like the winger’s offense-first style of play. To this day, it’s fair to say Hull is not a fan.

As the season wore on, the crusty coach/GM decided the franchise needed a new face. And so he did what any of us would do: He went out and landed the biggest star the game has ever known.

2. They traded for Wayne Gretzky.

Any hockey fan can picture Gretzky’s greatest moments: smashing records and lifting Stanley Cups as a kid in Edmonton; bringing the game to a whole new segment of fans as a slickly marketed star in Los Angeles; taking one last victory lap as a classy veteran in New York. But you could be forgiven for forgetting that The Great One was also, briefly, a St. Louis Blue. Lots of hockey fans have.

With the 1996 trade deadline approaching and Gretzky playing out the final year of his deal on a bad Kings club, it became apparent that Los Angeles could end up moving its captain. The Rangers emerged as the favorite, but couldn’t close. That opened the door for the Blues, and Keenan got the deal done: Gretzky for Craig Johnson, Patrice Tardif, Roman Vopat, and draft picks.

That doesn’t sound like much, and in hindsight it wasn’t. Vopat was the centerpiece, a 19-year-old rookie who’d played 25 games in St. Louis. Johnson and Tardif were both young forwards. Of the group, only Johnson went on to any sort of productive career, although even that was mostly as a depth guy, and none of the players the Kings chose with the draft picks ever played in the NHL.

Keenan might have been a tyrant in the dressing room, but he knew how to win a trade. Gretzky was immediately named captain, relieving Corson of his duties. The idea of the greatest setup man in history being paired with Hull was almost too good to be true. Gretzky even scored in his first game.

And besides, there was little doubt Gretzky would feel right at home in the St. Louis dressing room …

3. They were packed with ex-Oilers.

The whole “stack the roster with former Oilers” thing had worked out well for Keenan in New York, so he went back to it in St. Louis. In addition to Gretzky and Fuhr, the team featured Craig MacTavish, Charlie Huddy, Glenn Anderson, and Esa Tikkanen.

Each of those players had key roles in the Oilers’ Stanley Cup teams of the 1980s. Of course, that had been a long time ago, and we’ll get to that in a second. But first, there’s one more piece of the Oilers connection to keep in mind.

4. They also had a pair of current Oilers.

In addition to MacTavish, the 1995-96 Blues also briefly featured an appearance by journeyman defenseman Dallas Eakins. MacTavish and Eakins, of course, have since been reunited as the GM and coach, respectively, of today’s last-place Oilers.

That’s not actually all that interesting. I just wanted there to be one story that would come up when they Googled their own names that wouldn’t have the words “imminent firing” in the headline.

5. They were really, really old.

So yeah, they were largely built around the core of a team that had won Stanley Cups a decade ago. And Keenan’s Blues were clearly in “going for it now” mode, so you’d expect them to lean toward experience. And lean the Blues certainly did, in the same way your grandpa leans on his walker.

How old were they? Other than the 21-year-old Pronger, the next youngest Blue to dress for at least 50 games was 27-year-old enforcer Tony Twist.1 Gretzky, MacTavish, Anderson, and Huddy were all 35 or older, as were Jay Wells and Basil McRae. Both goalies were 33, and the team ultimately used 22 players who were in their age-30 season or later.

Even in a mid-’90s era that didn’t value speed quite as much as today’s game does, that was sort of nuts. But while the Blues were old, at least they could say their old players were pretty good.

6. They were stacked with future Hall of Famers.

At various points, the 1995-96 Blues featured no fewer than seven players who’d eventually be inducted into the Hockey Hall of Fame. That list includes Gretzky, Hull, Fuhr, and Anderson, as well as Pronger (who’s a slam dunk to get in once he’s eligible). They also had Al MacInnis, as well as a fading Dale Hawerchuk for the season’s first five months.2

So picture it: Gretzky feeding Hull on the first line. MacInnis and Pronger manning the blue line. A Hall of Fame goaltender in the crease. A Cup-winning coach behind the bench. And a ton of veteran leadership seeping out of virtually every other spot on the roster.3

These guys must have been amazing!

7. They weren’t actually all that good.

Oh right, the standings. Yeah, it turns out that the 1995-96 Blues were less than the sum of their parts.

The Blues actually finished below .500, posting a 32-34-16 record. They were fourth in the Central Division and only made the playoffs by two points.

Partly owing to Keenan’s midseason moves, Hull and MacInnis were the only two players to record more than 60 points as members of the Blues. Gretzky played well in St. Louis, recording 21 points in 18 regular-season games, but he never really clicked with Hull the way everyone had expected him to. (He also suffered a concussion in his second game, which wasn’t considered a big deal back then but could have affected his play.)

On paper, the Blues should have been one of the best teams in the league. In reality, they were barely average. But on the bright side, they did set one record that will probably never be broken.

8. They went almost the entire season without starting their backup goalie.

That’s because in 1995-96, Fuhr started the Blues’ first 76 games. That was the kind of streak that hadn’t been seen since the days when teams didn’t dress backups, and nobody has come even close to it since. In fact, Keenan appeared to have every intention of starting the veteran in all 82 games, until a strained knee snapped the streak in early April. Fuhr came back in time to finish with 79 games played, setting an NHL record that will almost certainly stand forever.

It’s not like the Blues couldn’t find a decent backup; they had Jon Casey, a solid goalie who’d been an All-Star just a few years before. And given that Fuhr was already well into his thirties, it sure seemed like a recipe to wear him out by the time the playoffs arrived. But as it turns out, fatigue wasn’t what the Blues needed to worry about.

9. They ended up needing that backup goalie in the playoffs.

The Blues met the Toronto Maple Leafs in the first round of the playoffs, and it goes without saying that Fuhr got the start. He played great in Game 1, making 33 saves in a 3-1 win.

But early in Game 2, Fuhr made a routine save with Nick Kypreos on his doorstep. Pronger shoved Kypreos from behind, sending the Leafs’ tough guy barreling over Fuhr. Well, maybe “sending” is the wrong word here, since the replay sure made it look like Pronger’s shove had somehow caused Kypreos to lunge in the opposite direction, in direct violation of the laws of physics.4

Either way, Fuhr came up limping and left the game. He’d torn a ligament in his knee and would miss the rest of the season, leaving the little-used Casey to shoulder the load.

10. It all ended on one of the NHL’s most famous overtime goals.

Even without Fuhr, the Blues held on to win that first-round series with the Maple Leafs in six games. That led to a second-round showdown with the Red Wings, who’d dominated the regular season on the way to 131 points and a league-record 62 wins. Detroit was heavily favored, but the Blues played them tough, taking them all the way to a seventh game. That one stayed scoreless until double overtime, when this happened:

That goal didn’t just end the series — it essentially ended this version of the St. Louis Blues. Gretzky hadn’t enjoyed playing for Keenan, and he bolted for New York as a free agent in the offseason. Many of the veterans moved on, and Anderson retired. A few weeks into the new season, Corson was traded. The team struggled, dipping under .500 by mid-December, and home games at the new Kiel Center featured thousands of empty seats.

On December 19, 1996, Keenan was fired as coach and GM. His eventual full-time replacements were Joel Quenneville behind the bench and Larry Pleau upstairs, and both had long and successful tenures in St. Louis. For his part, Keenan went to Vancouver, where he presided over the Mark Messier/Trevor Linden debacle, and then on to various other stops.

He was last seen in the KHL, and his name still comes up every now and then when an NHL team has an opening. Here’s hoping he comes back someday. The jury may be out on whether he’s really the right guy to deliver you a winner, but the man sure knows how to build an interesting team.