The Twin Awards: The Best and Worst of Actors Pulling Double Duty 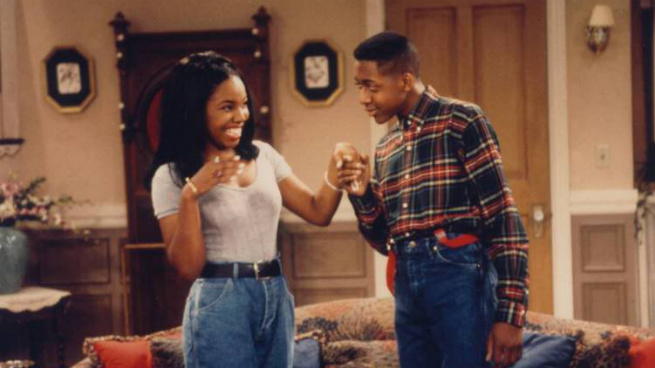 But still, SOMEHOW, despite existing in a galaxy elastic enough to allow all of that (and loads of other ridiculous things) to happen over a four-year stretch, he never played a thing I think we all wanted to see him play: his own evil twin.

Normal Zack Morris was a handful. Can you imagine the sort of trouble Evil Zack Morris would’ve caused? It’d have probably taken him only about two episodes to push a segregation act through the school board. BY THE END OF HIS FIRST SEASON, BAYSIDE WOULD’VE FULLY ADOPTED APARTHEID. That’s an episode of Saved by the Bell I want to see. That’s the real world, Peter Engel. Alas, it never happened. But maybe the second-best option has:

Entertainment Weekly announced last week that this fall Zack Morris’s Mark-Paul Gosselaar will play a set of twins, one good and the other a serial killer, on CSI on CBS. I assume he will be marvelous in the roles. (I needn’t see any more than the time he played himself and also impersonated a Russian chess master to be convinced.) Until then, some awards for others who have played their own twin on TV or in a movie: 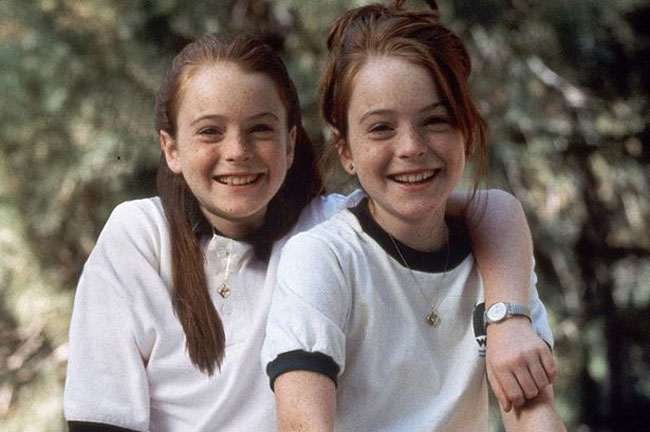 In 1998, Lindsay Lohan starred in The Parent Trap, a movie in which she was basically forced into being a 12-year-old Machiavelli TWICE, AT THE SAME TIME. We don’t need to fully recount the unspooling Lohan has suffered professionally and personally since then,* just know there is a 600-word subsection on her Wikipedia page titled “Machete and legal issues.” I have to assume that all of this knotted together in her brain stem.

*I wouldn’t change a thing, though, and I don’t imagine she would other. I watched The Butterfly Effect. You start piddling around in the past, and all kinds of crazy shit starts to happen. And I just don’t think any of us want to live in any sort of alternate version of reality where Lohan is happy and well adjusted but Mean Girls doesn’t exist. Mean Girls is a masterpiece.

Dude, for real I had no idea that Armie Hammer was a single person playing both of the Winklevoss twins in 2010’s The Social Network until I saw him in 2013’s The Lone Ranger and started searching around on Google to see if his twin brother was involved with the film. I LITERALLY WENT THREE YEARS THINKING THERE WERE TWO ARMIE HAMMERS (maybe the other would’ve been named Leggie Hammer?). When I was in middle school, there was a set of identical twins named James and Jesse Vargas. I felt the same way finding out that Hammer didn’t have a twin that I did the first time I saw James and Jesse walk down the hallway one behind the other, except I guess technically I felt the opposite of that way. I don’t know. It was crazy, is what I’m saying. 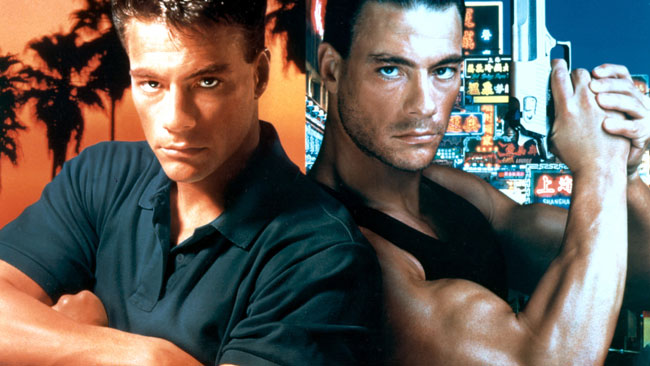 My own twin sons were born in 2007. They’re super dope. I love them a bunch. Still, I was more excited about watching this movie when it first came out than I was about them when they first came out. I mean, I didn’t know what my sons were gonna be like. They could’ve turned out to be jerks. JCVD was a proven commodity. That’s just me using real-life advanced stats, bro. I’m like the Daryl Morey of dads.

The Twins Most Likely to Topple a Hong Kong Criminal Empire 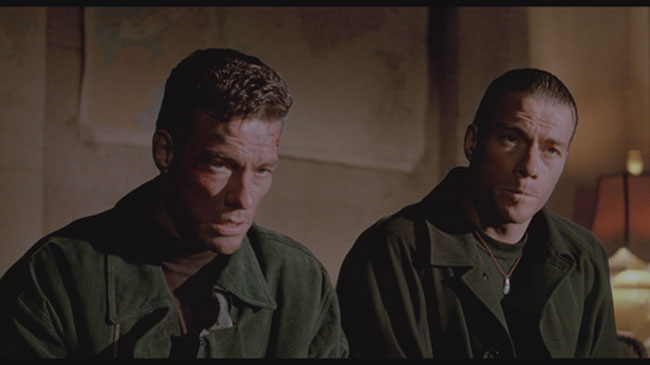 (Fun bit: Double Impact starts back when the JCVD twins were babies. One of the twin babies was a girl.) 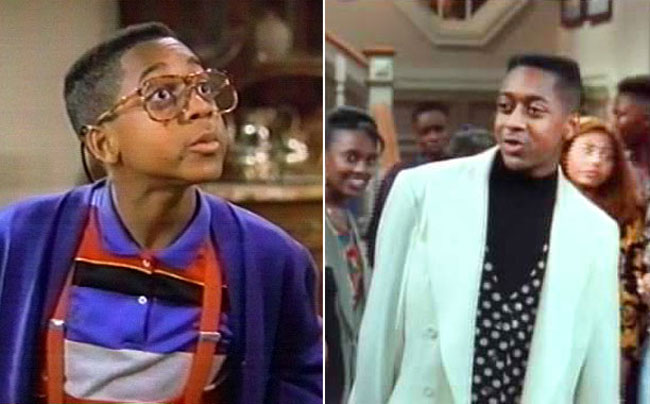 There are a bunch of movies and TV shows in which someone plays two roles and those two people look exactly alike but those two people aren’t technically twins. (Usually it’s as part of some only mildly believable doppelgänger plot, but also occasionally as part of a plot that requires the term “multiverse” to be used on the regular, like in Jet Li’s The One.) There was Michael Cera in 2009’s Youth in Revolt, in which he played himself and also a slightly cooler, imaginary version of himself. There was Eddie Murphy in 1999’s Bowfinger, in which he played a stand-in of a separate person for a fake movie (or maybe he was a fake person in a real movie or something like that; I don’t know, that was the worst shit I’ve ever seen in my life). There was Jake Gyllenhaal in 2014’s Enemy, Jesse Eisenberg in 2013’s The Double, and every actor in any sci-fi sitcom that was on the air longer than four weeks. None of them, though, NOT A SINGLE ONE, did it better than Jaleel White as Steve Urkel and Stefan Urquelle from the sitcom Family Matters. What nuance, what depth, what duality. Amazing.

The Twins I Hope My Twin Sons Grow Up to Be the Most Like, But Maybe Not Really

The Ghost Twins, The Matrix Reloaded 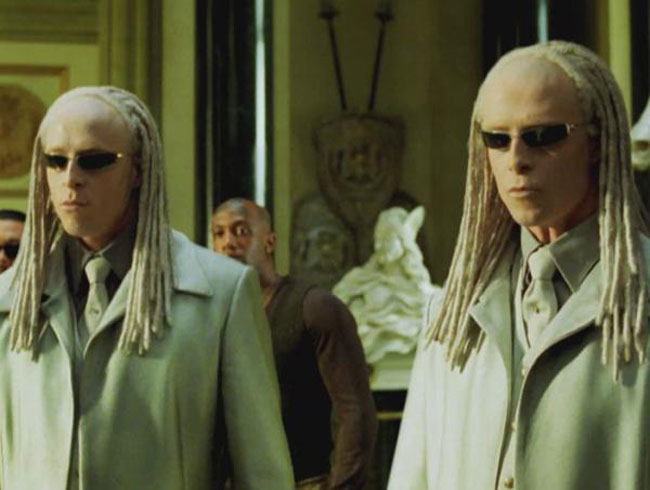 They wear matching outfits (INCLUDING WHAT APPEAR TO BE FULL-LENGTH WHITE LEATHER DUSTERS), they have white dreadlocks, they fight with straight razors, they know karate, and, oh, by the way, they can turn themselves into ghosts and travel through objects and insta-heal their wounds. All pluses, really.

The only thing going against them: They either aren’t very smart or they’re tacky showboats. Either way, it’s not good. To wit, this scene:

It starts with Twin A floating up through the ground in pursuit of Trinity and the Keymaker. After Twin A materializes, he chases after them, gets a door closed on his arm, and then stands there trapped while Trinity shoots slugs into it. Q: Why doesn’t he just turn back into a ghost and float through the door?

Twin B shows up, ghosts his way through the door, turns back into a person, then turns back into a ghost when Trinity starts shooting at him. Q: Why does he turn into a ghost when Trinity shoots at him? When Twin A was getting shot, he didn’t even flinch. Bullets don’t appear to hurt them. Which means Twin B is unnecessarily ghosting. I don’t want my sons to be guys who unnecessarily ghost.

After Twin B disarms and grabs Trinity, Morpheus releases Twin A from the door, who then ghosts himself, which erases the gunshot wounds to his arm. Qs: Again, why did he have to wait to be let out of the door? And why didn’t Twin B let himself get shot and then just ghost-fix it after? The evidence against Twin B as an unnecessary ghoster is almost impossible to ignore at this point.

Morpheus, after being told to drop his weapon, fires two shots at Twin B, who is still holding Trinity as a human shield. Qs: Why does he need her as a shield? And why doesn’t Twin A just kill Morpheus while he stands there?

When the bullets get near Twin B, he ghosts himself, which allows Trinity to escape. Q: YOU’RE INVINCIBLE, SO WHY ARE YOU STILL GHOSTING YOURSELF, DUMMY?

Trinity and the Keymaker run to a car. They get in. Morpheus occupies the Twins by sword-fighting them (bullets can’t kill them, so maybe the sword will work?). The Twins ghost themselves every time Morpheus swipes his sword at them. (KILL ME.) Trinity pulls the car around. Morpheus hops over the hood and jumps inside while the Twins just watch. Qs: Why don’t they ghost their way into the car? Why don’t they carry guns? Why don’t they just HURRY UP AND KILL THESE FOOLS AND THEN NOBODY HAS TO WATCH THE REST OF THE HORRIBLE, HORRIBLE MATRIX RELOADED???

I changed my mind. I pick different twins for my sons to be like. The new pick: 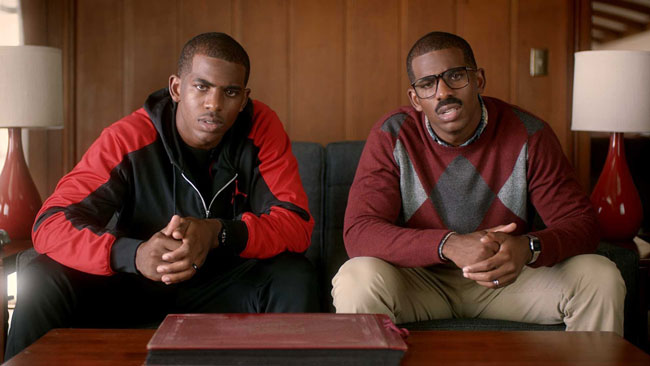 The Most Meta Twins 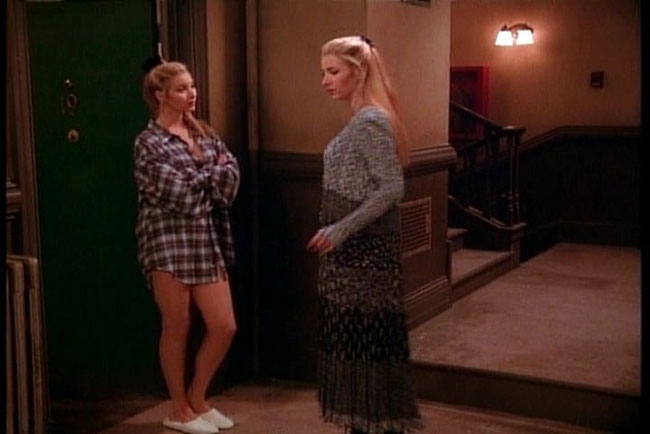 Just a very nerdy thing to know: Lisa Kudrow played Phoebe Buffay on the Friends sitcom. Before that, she was cast in a brief role on Mad About You as a waitress named Ursula Buffay. Mad About You and Friends were both set in New York, so Ursula’s part was pulled into the Friends solar system. I wish that I’d had to look this information up. I didn’t have to, though. :(

The Most Offensive Movie Twins?

This is an old Western in which Shatner plays a good, wholesome, normal white man who is a drifter and also a good, wholesome, normal white man who thinks he’s a dirty, murderous, rebellious Comanche warrior. It’s easy to tell the difference between the two because whenever Shatner is the Comanche twin, he doesn’t wear a shirt and sometimes he has a little bit of war paint on his face and all of his sentences have the phrase “my people” in them somewhere. (“I have promised my people you will burn in the fire,” etc.) In fairness to Shatner, though, the movie was filmed in 1968 when maybe every single white person was super racist. 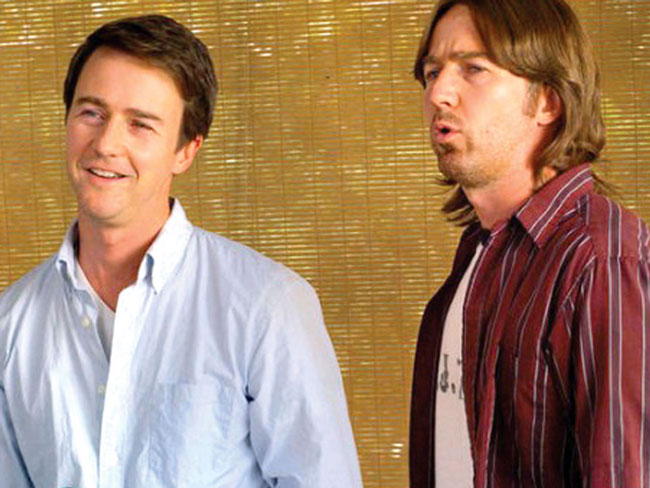 Because of his wig.

The Least Believable Portrayal of Twins

Because here’s a picture of David Hasselhoff with his own evil twin.

Boom. Throw some facial hair on and there you have it: evil twin.

Here’s Spock as his evil twin:

You should know it doesn’t work out that smoothly in real life. I tried to grow my facial hair out because I thought it’d make me look more menacing. It didn’t. Instead, I just looked like Hedo Turkoglu.

The Most Believable Portrayal of Twins

Matthew Modine was good as twins in 1992’s pretty boring Equinox. The deliciously creepy Jeremy Irons* was deliciously creepy in 1988’s Dead Ringers, a movie I hadn’t bothered to watch until my twins were born. Nic Cage was nominated for an Oscar for his portrayal of twins in 2002’s Adaptation. Leonardo DiCaprio was mostly good as twins in 1998’s mostly bad The Man in the Iron Mask .** Still, even with all that star power, you know what none of those guys knew? Kung fu. You want to win this category, you need to do at least one roundhouse kick in your movie. Plus, Jackie Chan had a ponytail that kept almost falling out and he never once broke character. You can’t beat that.

*Has Irons ever done anything poorly? What a gem. I don’t understand why he doesn’t have 50 Oscars. The Time Machine was like 1,000 times better than Argo. ARGO DIDN’T HAVE ONE SINGLE MONSTER IN IT. FOH, AFFLECK.

**The plot here is devastating: Leo, playing a king, keeps his identical twin brother locked up in an iron mask so nobody will know the twin exists. That’s a thing I briefly considered doing when my twins were born because one of them was born with his nose mushed to the side because he and his brother were so cramped in the uterus. Luckily for him it straightened itself out after a day or so.

Death or Glory: The Diverging Post-‘Lost’ Careers of Carlton Cuse and Damon Lindelof