Sequeltology 6: Simmons Breaks Down the Brackets 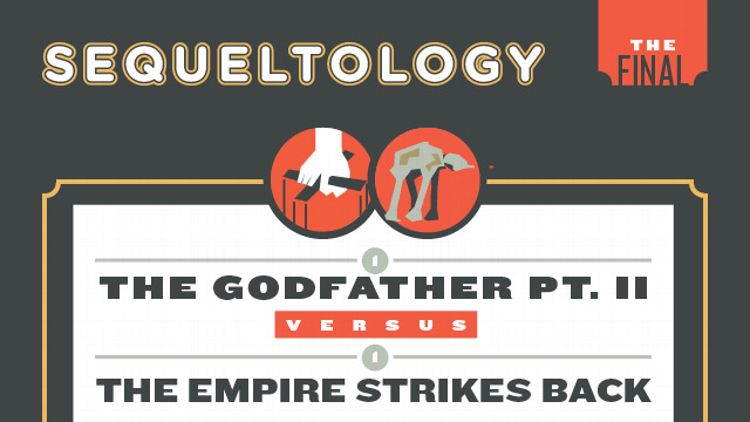 Before we break down the final matchup of the Sequeltology bracket — Godfather II vs. Empire Strikes Back (VOTE HERE) — I thought we’d answer the most frequently asked questions of the past nine days.

Q: Why didn’t you pick 64 movies instead of 32?
SG: It was 75 percent laziness and 25 percent “We need to do whatever it takes to make sure Rocky 5 doesn’t end up making the cut.”

Q: What was the most egregious omission from the 32-sequel bracket?
SG: Austin Powers: The Spy Who Shagged Me. I already whined about this in our “Biggest Sequeltology Omissions” edition of the YouTube Hall of Fame, but still, how could our staff (who voted for the seeds) overlook the funniest sequel ever made? You can’t even blame a post–Love Guru backlash against Mike Myers, because Wayne’s World II (a total cash grab littered with now-dated pop culture references and a dated-at-the-time Graduate homage) somehow sneaked into the bracket over Shagged (a superior sequel in every conceivable way). They made Wayne’s World in about three minutes! It’s one of those movies in which you can tell they were frantically writing scenes on cocktail napkins right before they filmed them. And we rewarded it???

(My theory: The massive success of the Austin Powers franchise became counterproductive from a “coolness” standpoint. The same thing happened to Borat, actually — once recognizable movie lines enter the mainstream and your 61-year-old uncle or accounting professor thinks it’s funny to make jokes in Borat’s or Austin Powers’s accent, it’s almost unrecoverable.)

Runner-up choice: I thought Before Sunset was one of the most original sequels ever made, but I’m admittedly a sucker for “catch up with the same characters a decade later after they’re much more jaded and beaten down” sequels. (You easily could have talked me into Big Chill II, St. Elmo’s Fire II, Pretty Woman II, Swingers II, Almost Famous II, and About Last Night II for the same reason.) The only reason Sunset didn’t make it? During the L.A. voting, noted romantic cynic Jay Kang bullied everyone off their original votes by unleashing his deadly Jay Kang Sarcastic Cackle and trolling the movie for about 20 seconds. People got scared off. I blame Kang. And by the way, he’s the same guy who gave Jackass 2 his highest possible score. See how flawed this process was?

Q: Wait, you love nothing more than complaining about flawed voting processes. It’s like your editors created Bracketology specifically to give you something to bitch about in the office, right?
SG: Yeah, but still.

Q: What other omissions bugged you?
SG: Home Alone 2 was better than Home Alone … only one of the most successful movies ever made. This seems relevant. We should have included Mighty Ducks 2 if only because we’re probably losing Rembert Browne when his contract’s up — not picking Ducks 2 for Rembert was a bigger slap in the face than the Celtics nearly trading Ray Allen last February. (And look how that turned out.) Our movie nerds flipped out that Army of Darkness missed the cut — including our ESPN Films buddy Dan Silver, the biggest movie dork I know and one of those guys who would literally drop dead of a heart attack if you looked him in the eye and told him that you genuinely believed Crimes and Misdemeanors was a better movie than Annie Hall. The second Road Warrior movie was considered one of the best sequels ever made for years and years … and eventually, everyone forgot this. Especially our voters. (I blame Mel Gibson.) Fast & Furious revived that franchise, made a bazillion dollars, guaranteed that they’d be making those movies every 18 months for the rest of our lives, and led to one of my favorite B.S. Report breakdowns (with Adam Carolla). You could make the case that Austin Powers was the second best trilogy ever made, and that BOTH sequels could have made it. And frankly, I’ll never forgive myself for not remembering to nominate Bad News Bears in Breaking Training for all the reasons mentioned here, and especially this one.

Q: What was the worst sequel that actually made it?
SG: After we failed America by including a generic action movie like Bad Boys 2, I was delighted when Rocky II trounced Boys in Round 1 with four times the votes. Al Pacino’s cringe-worthy performance in Ocean’s Thirteen should have eliminated it from consideration just out of principle. And God bless the Jackass franchise, but it’s hard to think of them as “movies” rather than as insane YouTube videos strung together into an 80-minute glob. If there’s a way to drug-test the 539 people who voted for Jackass II over Godfather II on Round 1, I’d like to explore it.

Q: What was the single biggest Sequeltology upset?
SG: Indiana Jones: The Last Crusade easily bringing down Aliens on Day 4. You can’t even say Aliens was penalized by being an ’80s movie, because Last Crusade was an ’80s movie. I’m 45 percent sure that a totally baked Harrison Ford spent four hours stuffing the ballot.

Q: At what point during this Sequeltology process did you realize you were old?
SG: Probably during the voting session for L.A. staffers. I suggested Halloween H20 and nearly got laughed out of the room, followed by Robert Mays saying, “You don’t understand, my generation doesn’t CARE about Michael Myers.” That one really stung. (Fortunately, I oversee Mays’s yearly Disney review — so it’s not like I can’t get my revenge.) H20 was a cleverly written sequel that revived a moribund franchise (no, really — it made $55 million), jump-started Josh Hartnett and Michelle Williams’s movie careers (fine, it went 1-for-2 there), proved that LL Cool J wasn’t just the “Mama Said Knock You Out” rapper (you’re right, I’m reaching), and erased the stink of Halloweens 3 through 6. It also allowed the Halloween junkies (I’m one of them) to pretend that those four movies never happened, and that Jamie Lee Curtis’s three movies (1, 2 and H2O) were unofficially the Halloween trilogy.

Lemme flip this around for you: Who’s the most famous Hollywood murderer ever? Either Michael Myers or Jason, right? Well … did it make sense that they were only represented in Sequeltology twice? Didn’t think so.

Q: Who made Chuck Klosterman the self-appointed czar of sequels?
SG: We’re still trying to figure this out. It happened organically during a massive e-mail chain, when we were trying to determine sequel rules and everyone just kinda went with it. When “The Ethicist” says, “I want to become the Sequel Czar,” you don’t stand in his way.

Q: Did you fire the Grantland staffer who thought it was a good idea to rig the brackets so that Dark Knight and Godfather II battled in the semifinals instead of the finals?
SG: Nope. Only because we don’t know who made the mistake. (Everyone is still passing the buck and blaming other staffers.) I’m just biding my time and waiting until the right moment — probably the Grantland Christmas party, after there’s been some distance and everyone has thrown down a few drinks — to find out what really happened. Rule No. 1 for Totally Contrived Internet Brackets: “When You Have Two Overwhelmingly Heavy Favorites, Make Sure They Meet in the Finals.” If this were sports, you’d wonder if that epic semifinals battle took too much out of Godfather II and left the door open for a finals upset. But guess what? It’s not sports. It’s a totally contrived Internet bracket.

Q: So … who did you vote for? Godfather II or Dark Knight?
SG: Heading into this process, I just assumed Godfather II would cruise to the title for a variety of reasons, including:

1. It’s the greatest sequel ever made. Some even believe it’s better than the original Godfather, which isn’t true … but still.

2. It’s one of the greatest movies ever made. You could say it’s the ’96 Bulls of sequels.

3. It features one of the great performances of all time (Pacino as Michael Corleone) and a tremendous performance by one of the greatest actors who ever lived (Robert De Niro), kick-starting the “De Niro or Pacino” debate that lasted for another 30 years (one that I even tried to solve in a Sports Guy mailbag once). And we haven’t even mentioned John Cazale’s performance as Fredo yet. John Cazale was the Robert Horry of 1970s cinema. By the way, you know I’m excited about a movie when I keep bringing up convoluted NBA parallels. Sorry. I can’t help it.

And look — you could make a really good case that The Dark Knight was the best movie of the 2000s. (I argued in 2009 that Almost Famous was the most rewatchable movie of the 2000s, but there’s a difference between “best” and “rewatchable.”) We won’t totally know until there’s the right amount of distance — maybe 20 years or so — when the impact of Heath Ledger’s death fades a little, when we can judge the movie for what it was, and most important, when Maggie Gyllenhaal’s lousy performance takes on a life of its own. One of the great things about Godfather II? You can watch it over and over again for 40 solid years without finding any real flaws. It’s an impeccable movie. Even the risky ending (when they brought the Corleone brothers back for a flashback scene) worked way better than it should have. But I’m never going to watch Dark Knight without thinking, I don’t really care if Maggie Gyllenhaal lives or dies right now. And that’s a problem. It’s the Luc Longley/Bill Wennington platoon of that movie. (See? Another NBA analogy. I told you, this is what happens to me.) So for me, the choice was clear.

But I get the generational thing, too. If you’re under 25, you might feel more attached to Dark Knight then a “classic” that came out four decades ago, just like you might think LeBron is better than MJ. (I can’t stop.) That’s why we worried Dark Knight might win … and it almost did, coming within 66 votes of sneaking into the finals. What a battle. Our friends at Facebook told us that Godfather II vs. Dark Knight was the closest voting battle they’ve ever had for anything with over 10,000 votes. I thought that was amazing.

Q: Those last two sentences … did you make them up?
SG: I did.

Q: Is this over yet? Just tell us the betting line for the Sequeltology finals and wrap this up, please.
SG: I have Godfather 2 as a minus-600 favorite over Empire Strikes Back. You know where I stand. And if you’re on the fence, just remember … for all his wisdom, Yoda never came up with a line as great as, “If anything in this life is certain, if history has taught us anything, it’s that you can kill anyone.”

(Well, except for the people who liked Wayne’s World II more than The Spy Who Shagged Me.)