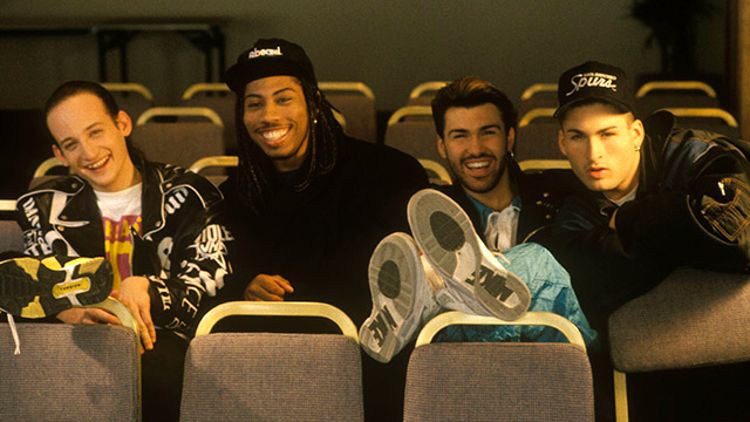 Welcome to our newish series, Rembert Explains the ’90s. Unlike the source material for our previous, ’80s-themed series, these videos have been seen countless times, with the result being an unparalleled, almost embarrassing level of expertise. Rembert will write down his thoughts as he’s watching the video, then we’ll post those thoughts here. This week’s installment, selected by Grantland editor Juliet Litman, is the time Color Me Badd made a cameo on Beverly Hills, 90210 (Season 2, Episode 26, 1992). If you have an idea for a future episode of Rembert Explains the ’90s, e-mail us at hollywood@grantland.com.

Note: This feels more like an ’80s clip, because I did not watch Beverly Hills, 90210, but all is not lost in the “expertise” department, seeing as I know everything about the discography and wardrobe decisions of Color Me Badd.

0:00 The bar is set pretty high on this clip, because uploader “Billy Meade” calls it “The greatest moment in 90210 history.”

0:04 Jennie Garth is clopping around the diner in a sundress, black clogs, and rolled-down tube socks. Swoon city.

Boy, did these people matter back then.

0:10 Color Me Badd just walked into the diner. Curious to find out if they’re playing the roles of four normal guys or themselves, the most famous up-sexers of 1992.

“Donna, these are my friends, Kevin, Mark, Bryan, and Sam.”

This is weird. Are they going to sing “I Wanna Sex You Up” in the middle of this diner? Also, aren’t these kids in high school? Also, why are the four Badd guys friends with Jennie Garth?

I really should know their characters’ names. But I forget. Regardless, Brian wins for excitement.

“This is Brenda and Donna and Brandon.”

Thanks for the character name bail-out, Garth. Also, why does she beef with Brian Austin Green like that? She introduced Brenda (Doherty) and Donna (Spelling), but not the BAG? She even introduced Brandon (Jason Priestley) and he wasn’t even at the table:

0:32 Before going on, let’s talk about each of these guys:

They were great, because there’s really something for everyone.

Great. We’re all on the same page.

0:32 Throw this piece of acting in the Library of Congress.

0:44 The sequence of events over the past 10 seconds: Almost George Michael Guy asks about the hamburgers, Tori Spelling goes full fangirl over the group, as if they aren’t 5 feet away, and Jennie Garth says that her friends, Color Me Badd, will have to “sing for their supper.” And she makes this face while saying it:

I really should go back and watch this show.

0:48 How do you feel about this Garth declaration, BLACK?

It should be noted that he delivers this line with his head facing away, something only the finest of actors can pull off — that muffled, mumbly, completely uninterested dialogue.

0:50 I don’t know what this is about, but as soon as Color Me Badd agrees to sing, both Garth and Spelling respond in the same way with their tongues.

It’s as if it’s a signal. Like a distress signal. Or a “my body is changing” signal. Definitely one of those two.

0:57 Of COURSE they turned the chairs around before sitting in them.

1:17 These are two high school girls who are about to fight to the death over George Michael Guy.

Unfortunately, one of them will be stuck with Almost George Michael Guy. And that person will be Shannen Doherty.

1:29 Ahhhhhhhh this just got awkward, George Michael Guy is mumblewhispering love Spanish to three high school girls, how do I close this video?

She can’t even look him in the eyes, she’s so flustered by the fake lisp he’s just developed.

George Michael Guy just locked eyes with her. She has officially been chosen, for about five seconds. A zoom-out, however, shows us that NOT EVERYONE IS THRILLED BY THIS.

1:34 It’s also worth noting Receding-Hairline Curly-Fro Kenny G Fire Marshall Bill Guy has not had a close-up. This has become a varying–degrees–of–George Michael Guy show, featuring BLACK and some fourth humanoid figure in the background.

1:57 Even though I’ve yet to hear the lyric “Making love until we drown,” I can’t pretend as if this song isn’t a jam.

1:58 Color Me Badd’s appearance in the diner has led to this.

2:04 And just like that, the episode’s over. BUT DID THEY EVER GET THEIR BURGERS?