Prepare Yourself for the Blaxploitation Musical ‘The Wizard of Watts,’ Coming to You This Weekend From ‘Black Dynamite’ 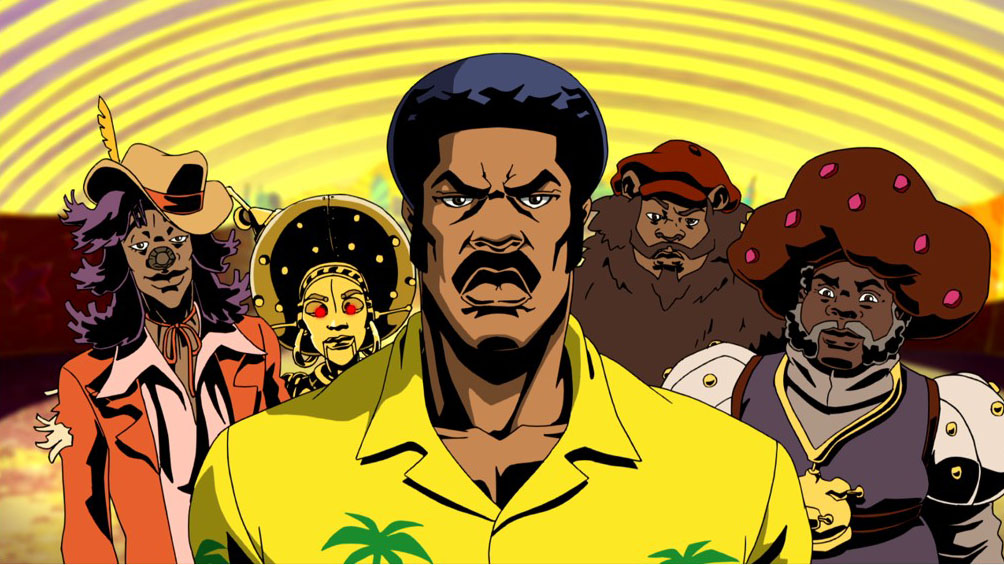 Even Black Dynamite needs to take a day off. Unfortunately, sometimes you get hit in the head with a brick on your day off and, in turn, get transported to a land called Oz-Watts. 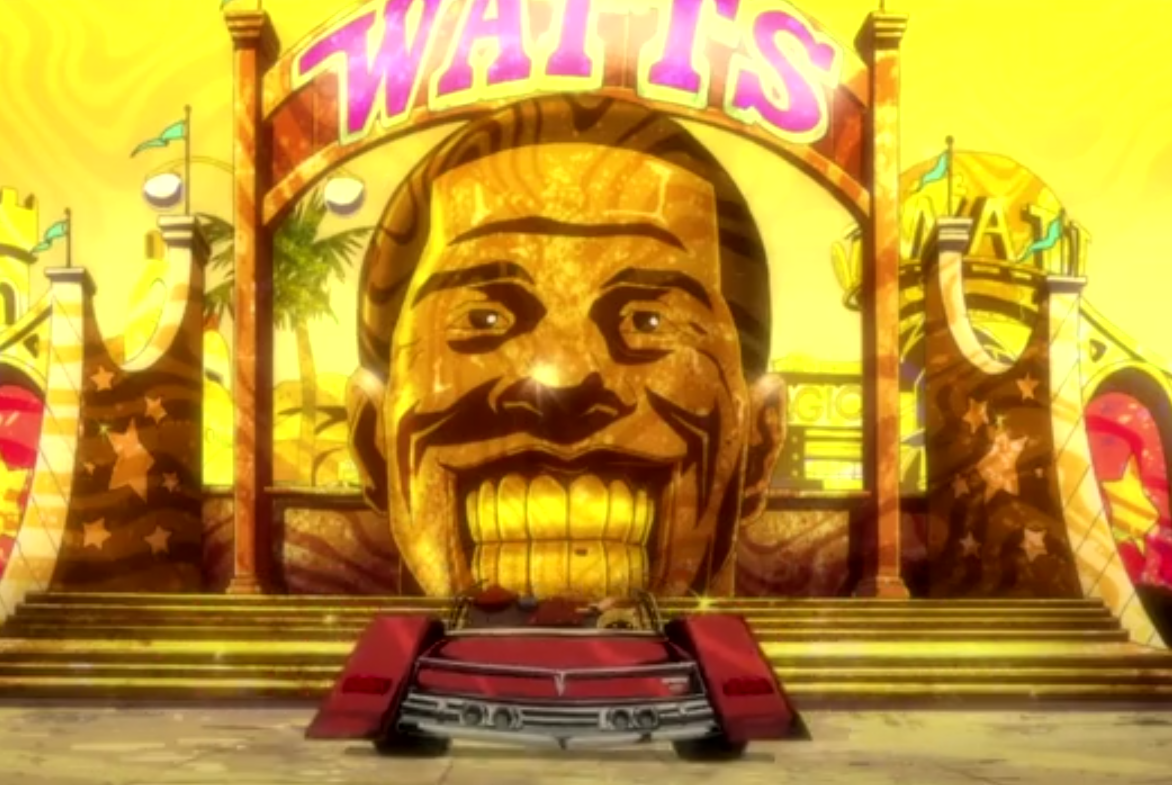 Confused? Good. Because it’s only going to get wilder.

On Saturday evening, an hourlong musical premieres on Adult Swim. It’s an episode of Black Dynamite, which is now in its second season (and a spinoff of the 2009 blaxploitation spoof cult classic of the same name, starring Michael Jai White as the title character).

The musical is called “The Wizard of Watts.”

Let’s look at the eight-item checklist needed to deem something a Blaxploitation Spoof Wiz-Inspired Animated Musical:

1. Is there a man with gold wings and a crown that says “Godfather” who looks like James Brown and says, “Welcome to the black version of The Wiz”? 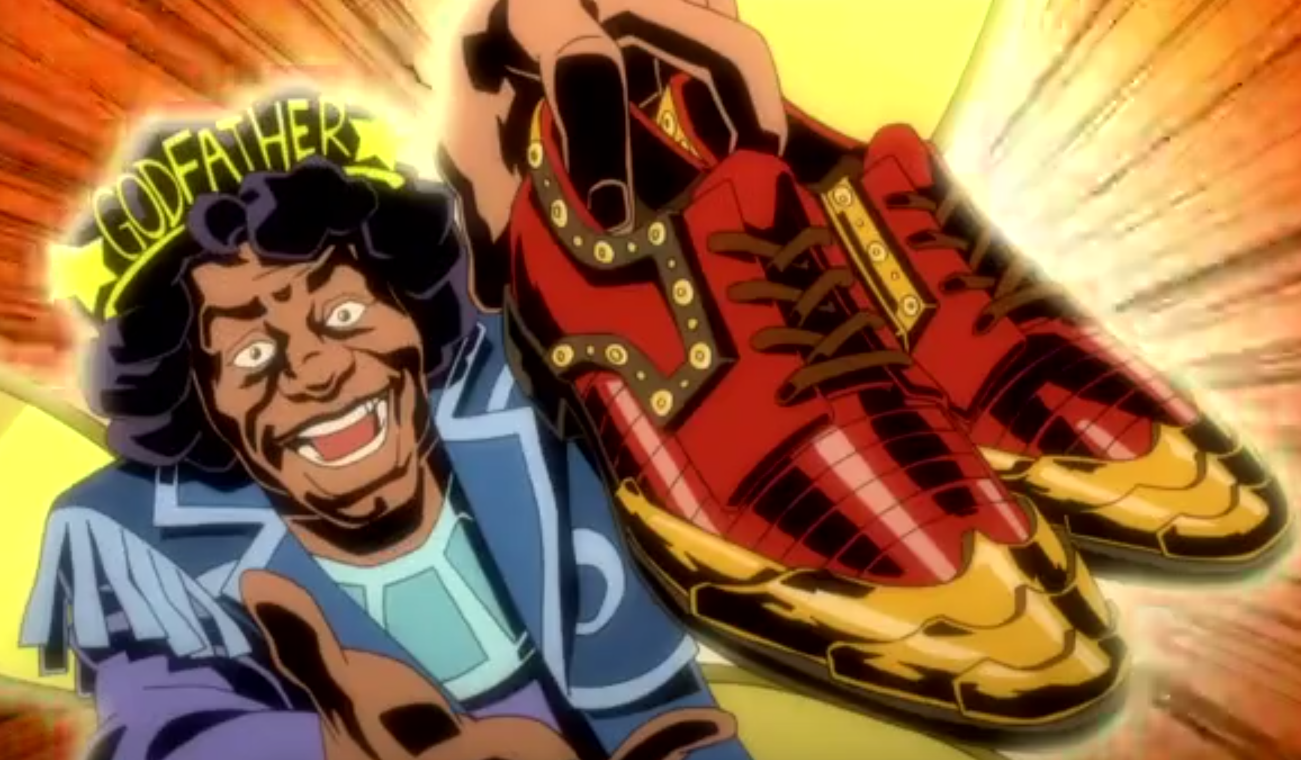 2. Is there a black poodle that talks — and is voiced by Tyler, The Creator? 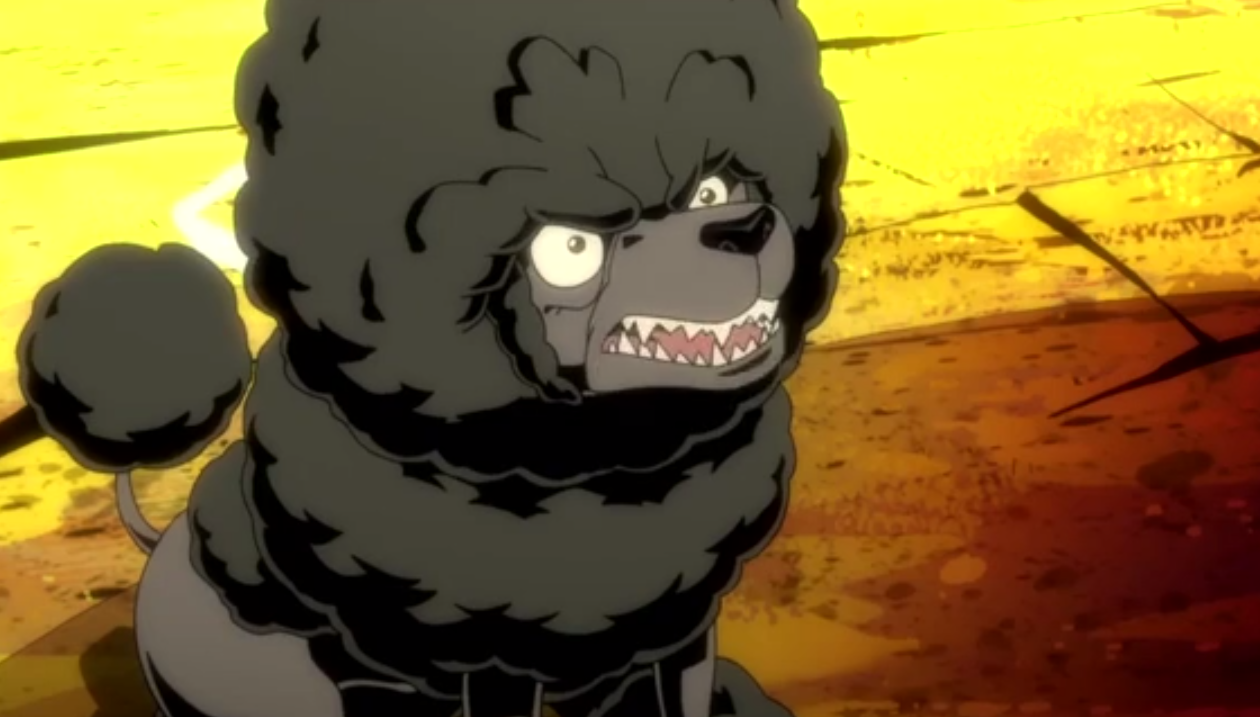 3. Is there a “Rapper’s Delight” bass line coming out of a lowrider, followed by a set of twin unicorn-riding bigfoots with perms, clapping in unison? 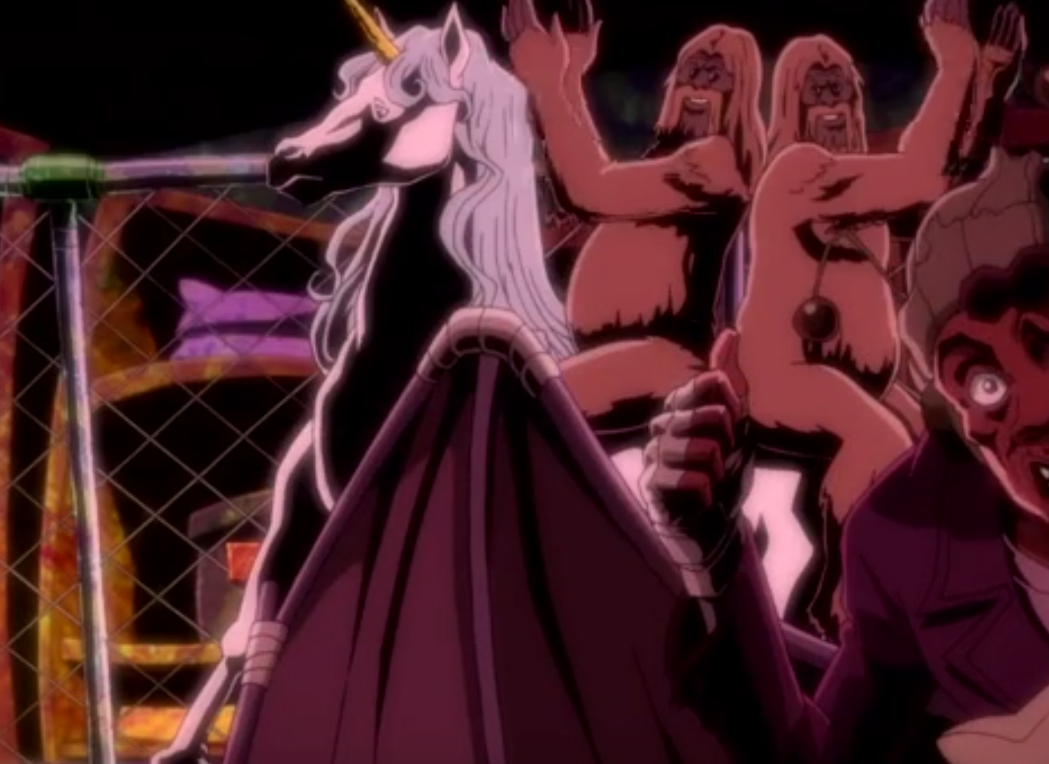 4. Is there a scarecrow with Katt Williams hair who hangs out atop two street signs while barely dressed women — women with beaks for mouths — dance around him, one of which is voiced by Erykah Badu?

5. Instead of a flying monkey, is there a flying junkie? 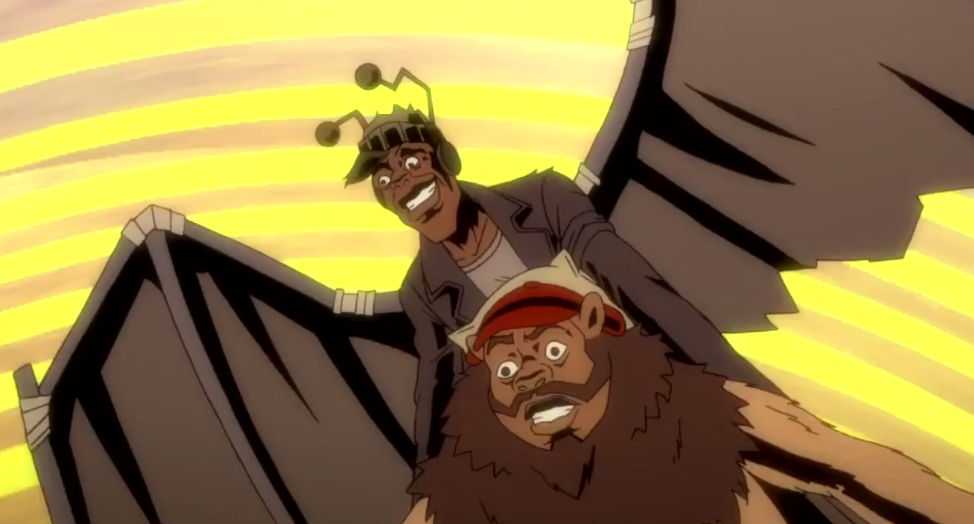 6. Is Magic Johnson the Wiz? 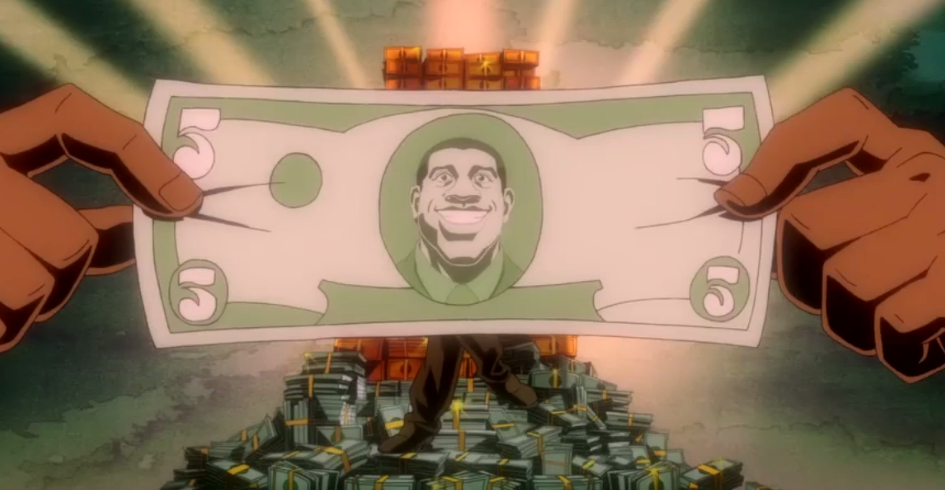 7. Is there a lion that says, “You cats are going to see the great and powerful Magic Motherfuckin’ Johnson, oh you know I wants in”? 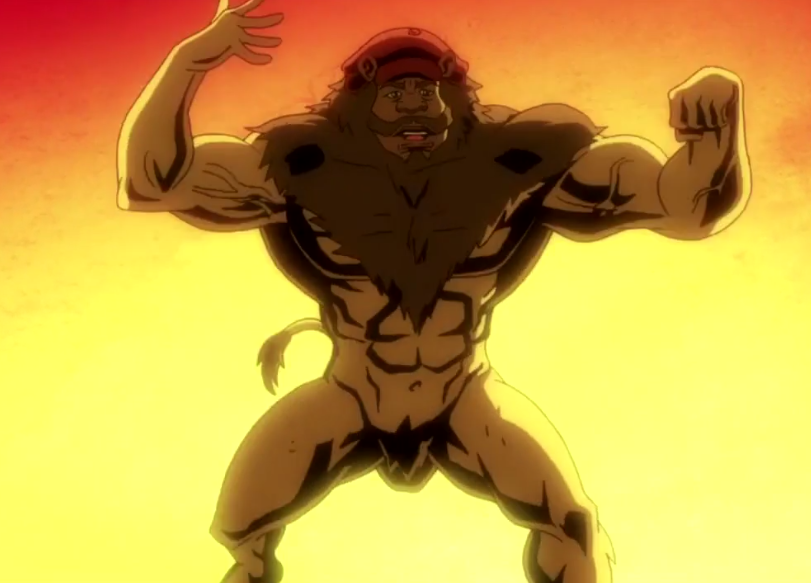 8. Is there a gigantic, pixelated green penis, which belongs to a police officer frog voiced by J.B. Smoove, choking out the protagonist? 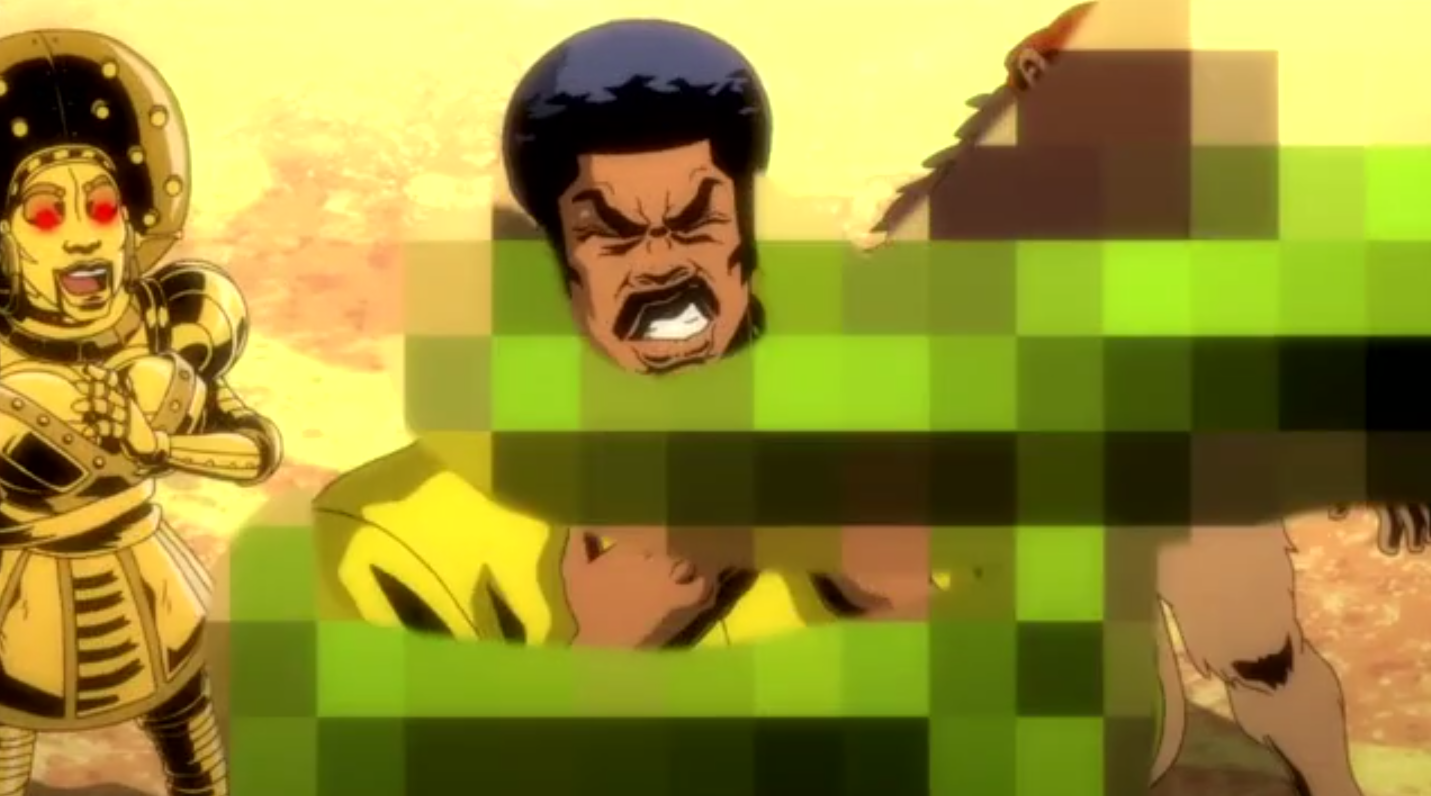 Perfect. Eight for eight. Now that that’s settled, I deem this worthy of viewing.

What happens after the frog-officer’s penis attacks Black Dynamite, however, is what truly makes this interesting. Because the musical (in the trailer, at least) turns to commentary on police brutality. Here’s an exchange between a pig in riot gear and Black Dynamite:

Black Dynamite: Wicked honky bitch of the West Side, you done fucked up now.

A fight breaks out, the police begin beating the citizens, and then Black Dynamite catches a camera that was flying in the air. He points it at the main officer. 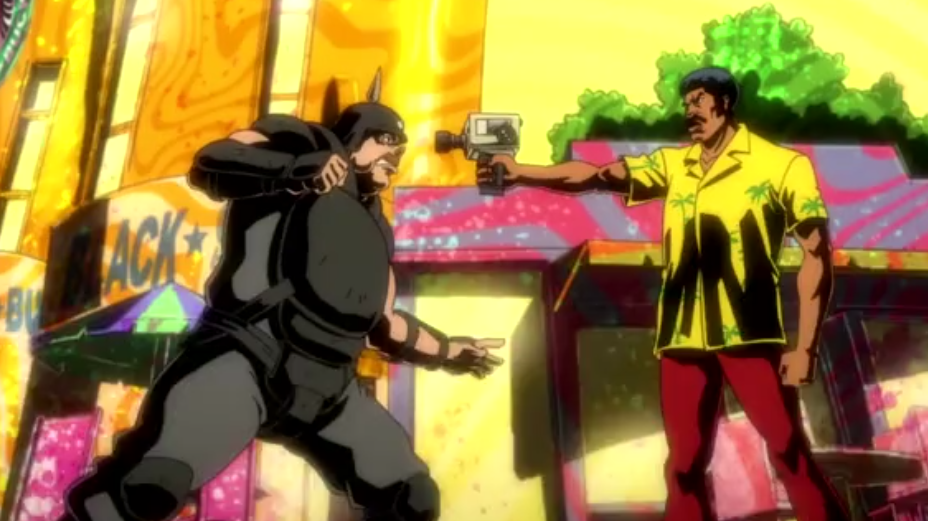 A gunshot goes off. The screen goes black. You hear the signature “DY-NO-MITE.”

Like many pieces of art that have been terrifyingly topical over the past six months, “The Wizard of Watts” was conceived more than two years ago, before it was known it would fit right in with the times.

Carl Jones, cowriter and director of “The Wizard of Watts,” said this to The Daily Beast:

The Wizard of Watts is not just about police brutality. It obviously wasn’t done with Ferguson in mind because it was done way before that. I don’t want to paint the picture that this is our answer to Ferguson or speaking to Ferguson. There are so many layers to this movie and so many other things that we want to do that we don’t want to be overshadowed by the way the media has a tendency to spin what the show is about just because of what’s happening right now. There are a lot of other things that you can get out of it.

It’s social commentary of all types. And like some of the best social commentary, it’s often subtle, hiding in plain sight in a comedy. You can pick up some of these subtleties just from the trailer, but there are also very clear, in-your-face statements that you can only learn from watching the musical. As with any musical, suspension of disbelief is necessary. But for better or for worse, “The Wizard of Watts” doesn’t seem to require much of an imagination.

“Oh, no! Not an irrefutable visual record of my illegal actions!” says the pig in riot gear, upon having the camera pointed at him. Which explains the gunshot sound in the trailer. Because, in Oz-Watts, footage is the only way to defeat the bad guys.

'The Right Reasons' Podcast: Breaking Down 'The Bachelor' and 'The Challenge' Premieres