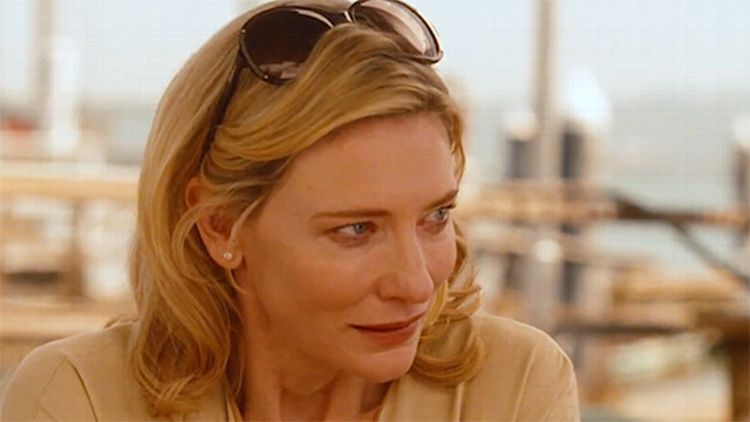 It’s become commonplace to assert that 2013 was an especially rich year for American movies, partly because it’s true. Yet you wouldn’t know it from the categories I’m going to examine today. Here we are at Best Actress and Best Supporting Actress, and the field before us does not constitute good news. In her delightful acceptance speech at the National Board of Review awards last week, Emma Thompson, who won for Saving Mr. Banks, said that while she is ordinarily inclined to complain about the “dearth of roles for women,” this year, like buses, “suddenly 17 came along at once.” If only it were true; if only there were even a dozen legitimate contenders for Best Actress instead of the five, all previous winners, who have been on Oscar-guesser short lists since Labor Day and now look as though they will march toward nomination morning unimpeded by surprise, competition, or even the kind of serious discussion of the specific merits of their performances that only happens when there are more serious contenders than there are slots.

Thompson will be one of the five this year, and although I think Saving Mr. Banks is a cringe-making apologia for (and example of) Hollywood’s appetite for sanding the spikes and splinters off a good story, I can’t really begrudge the affection for its star: As P.L. Travers, she brought taste, control, and comic modulation to a caricature of a role, and did everything she could to hint that the imperious author who insisted that silly Americans were ruining Mary Poppins was more than an uptight British meanie. (How I wish that Thompson, who has a well-earned screenwriting Oscar for Sense and Sensibility, had gotten a crack at this script.)

Thompson will be joined, in all likelihood, by Sandra Bullock for Gravity and by Judi Dench for Philomena. Ordinarily in Oscar handicapping discussions, a question mark does not hover anywhere near Meryl Streep, who is in line for a record 18th nomination for her starring role as a rancid, drug-addled matriarch in August: Osage County, a red-meat part that won Deanna Dunagan a Tony when Tracy Letts’s play ran on Broadway. But a combination of critical indifference to the movie and a very late opening (August: Osage County was still in only five theaters when voting ended) could make this the rare year in which Streep is the odd woman out. I think she’ll make the cut, but if she doesn’t, the spoiler will probably be American Hustle’s Amy Adams, a four-time Supporting Actress nominee whom the Academy clearly loves. (May I pause for a second to note, simply, that she is fantastic in American Hustle? The way she slips in and out of that British accent in order to make you wonder if she’s calculating or just losing control? That’s blurriness done with precision. And her primal scream of ecstasy and adrenaline and fear while sitting on a toilet in a disco was, for me, one of the year’s most unexpectedly exciting movie moments.)

This is all moot, of course, because all of the above actresses know that what they’re competing for, barring a real shake-up, is the chance to serve as handmaidens at the coronation of Cate Blanchett. As soon as Blue Jasmine opened in July, Blanchett’s portrayal of a modern-day Blanche-in-Madoff’s-clothing made her the presumptive front-runner. Nothing since has altered that, which is a shame — not because Blanchett’s unsparing, un-self-sparing performance isn’t great (I think it’s the best in this category) but because this should have been more of a fight. In a better year for actresses, it would have been.

And this is where we in the prediction game become part of the problem. Thompson, Dench, and Streep were on everybody’s short lists long before their movies were shown, because when you’re making wildly premature surmises, pedigree and the friendly whispers of publicists (“Between us? I’ve seen a rough cut of the movie, and she’s really good”) are all that matter. Predictors don’t like surprises, and so when they come along, the system in which they/we participate is slow and sometimes grudging about revising long-held assumptions, especially when it means elbowing a big name aside. That’s true whether the surprise is a TV actress like Julia Louis-Dreyfus, exploring every nuance of her vulnerable, sharp-tongued, compromised character in Enough Said, or a relative unknown like Brie Larson, creating a perfectly lived-in naturalistic portrait of a young social worker in Short Term 12, or a foreign newcomer like Adèle Exarchopoulos, embodying her character in Blue Is the Warmest Color so completely that people still wonder if the performance is acting or just luck.

These performances should have been discussed right alongside the big names. Instead, everyone — predictors, campaigners, and, I suspect, voters — essentially cooperated early on to divide the field into two categories: the type of actress we nominate, and the type of actress we don’t. Those on the list, and those trying to crash the list. The thing is, there shouldn’t be a list. The process of creating predictive rosters that include unseen performances ultimately contributes nothing to the season except the early reinforcement of well-financed campaign narratives and the marginalization of merit-based choices. OK, end of harangue. For now. Here’s to a deeper bench and a fairer fight next year.

Right on the edge
Amy Adams

There’s not much cheerier news to report in the Best Supporting Actress contest, a field in which the work of the five women who will likely be nominated is very good, but the bench is pretty empty. The choices seem to have been defined by preexisting narratives rather than by spirited discussion of the performances. 12 Years a Slave’s Lupita Nyong’o is the gorgeous newcomer who had to go through hell onscreen but made her quieter moments vivid too. Nebraska’s June Squibb is, at 84, the late-in-life discovery who can make every older member of the actors branch believe that if they were just given one terrific role, they could bring the lifetime of experience and control to it that she did. Give or take a couple of billion dollars, worldwide fame, and the Jean Hersholt Humanitarian Award, Lee Daniels’ The Butler’s Oprah Winfrey is exactly what she was when she was last nominated in this category 28 years ago for The Color Purple — the outsider who, surprisingly, can really act. American Hustle’s Jennifer Lawrence is The Phenomenon — an Oscar winner, the star of the biggest current franchise in movies, and an actress on the precipice of her third nomination before her 24th birthday. As many have pointed out, this kind of all-at-once emergence of a full-on American female movie star is extraordinarily rare — the last time it happened was with Julia Roberts, who received her first Oscar nomination in this category for Steel Magnolias six months before Lawrence was born. She is now a strong prospect for her fourth, for August: Osage County — in a role that was considered a lead on Broadway.

I like all five of these performances a great deal. I like the way Roberts embodies a haggard spirit who mostly knows how to keep a lid on her vast reserves of anger and resentment. I like the fact that Squibb never plays her big moments as big moments or as cutesy-oldster comedy turns; she helps us believe Bruce Dern because she helps us believe their marriage. I love the way Winfrey slumps in a chair, and looks assessingly at herself in the mirror as she applies makeup, and lets herself get a little physically sloppy and loose when she drinks; she’s alive to her character both emotionally and physically. I wish Lawrence would stop getting cast in roles for which she seems too young, but with every performance, she seems to find something new and difficult to make look easy — she seems to be enjoying herself onscreen but never at the expense of her character or the audience, which is an achievement of a high order. And I can’t wait to see Nyong’o in a non-suffering role; she’s clearly got the goods to pull it off.

If I’ve gone on at length about these five performances and their merits, it is in part because there is little else to talk about. Sarah Paulson is wonderfully ugly and Alfre Woodard has two unforgettable minutes in 12 Years a Slave, but Fox Searchlight has chosen its battles on this film, and its campaign is about Nyong’o. If August: Osage County has more support than I imagine it does, Margo Martindale could be a contender for a role that won a Tony for Rondi Reed on Broadway; she nails every beat as Streep’s vindictive sister, suffering only from the fact that the way the play has been cut, those big beats are all that’s left of her character. Sally Hawkins does a great job as Blanchett’s happy-go-lucky sibling in Blue Jasmine, but in life as in the movie, the bad sister seems to gobble up all the attention. And Octavia Spencer, who won this award two years ago for The Help, is unerringly fine as Oscar Grant’s mother in Fruitvale Station. A hysterical, grieving hospital sequence would almost certainly have secured her a nomination this year, but it’s to her and the movie’s considerable credit that absolutely nothing in her big scenes is shaped or played to make them feel like big scenes. In a category that sometimes reward histrionics, she may be penalized for good taste.