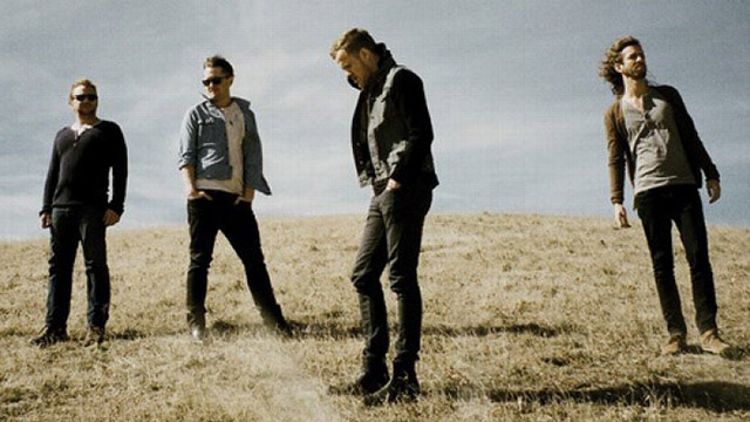 The first (and possibly last) thing you need to know about Imagine Dragons is that the name really oversells the band. The existence of Imagine Dragons is a sad reminder that Ronnie James Dio is dead, and therefore the perfect moniker for a Ronnie James Dio side project is left to a pop-rock group from Las Vegas that’s clearly inexperienced in the hydra-balladry arts. (Does Pirates of the Caribbean include a dragon? Not good enough either way.) But let’s set that aside for now: Imagine Dragons are presently situated at the forefront of what I like to call silent-majority rock. If you follow pop music exclusively via the Internet, you may have little or no idea who these guys are; if you glean your knowledge of contemporary jams primarily via the radio and/or ads for prestige-averse major-network dramas and/or video-game sound tracks, you probably know that Imagine Dragons ranks among our most successful bands at the moment. (In the current rock-flavored chart pop landscape, Imagine Dragons is the Black Sabbath to Maroon 5’s Led Zeppelin.) This band is all around us right now, which is obvious unless you’re staring only at the hippest music websites. Imagine Dragons is like Neo for anyone who mistakenly believes that pop-culture reality can be perceived solely through the lens of their social media matrix.

“Radioactive” is the second single off of Imagine Dragons’ full-length debut Night Visions, which has a decent-sized chance of one day selling as many copies as The 20/20 Experience did in its opening week — blockbuster numbers for any band classified as rock in 2013. Like ID’s previous hit “It’s Time,” “Radioactive” is rock music at its least rock-like, drawing from the same trendy well of dubstep and Europop accoutrements as practically every other act near the top of the Hot 100.

Production notes
The influence of Alex Da Kid — the executive producer of Night Visions and overseer of alt-leaning rap smashes like Eminem’s “Love the Way You Lie” and Dr. Dre’s “I Need a Doctor” — has served Imagine Dragons well commercially. “Radioactive” is cut from the same cloth of dramatic, turgid, and frustratingly effective melodrama as those songs: Singer Dan Reynolds is highly reminiscent of Alex Clare on the similarly ad-friendly 2012 hit “Too Close” on the wubby verses, before he slips into a late-period Grohl-esque howl on the anthemic chorus. The beat never picks up past “remedial sports arena stomp,” but “Radioactive” always ends before I expect it to, clocking in at a fleet 3:07. But that’s still enough time for the repetitive chorus — “whoa-oh-oh-oh, oh-oh-oh, radioactive, radioactive” — to seep into your system and turn your digestive system into a tub of pink goo.

Lyrical notes
“Radioactive” conforms to the apocalypse fetish of pop circa 2012, now bleeding into ’13. Reynolds actually refers to this directly in the first verse: “This is it, the apocalypse,” he says plainly, which makes Imagine Dragons somewhat less poetic than, say, Ke$ha. The imagery at the start of the song — Reynolds is breathing in chemicals, he’s making said breathing noises, he’s breaking out of a prison bus — suggests a godforsaken dystopia. But the message is muddled by the cuddly video, where each Imagine Dragon is imprisoned by an evil kingpin (played by Lou Diamond Phillips for some reason) who amuses himself by holding cockfights between puppets. And not scary, “Land of Confusion”–style puppets, but puppets that sort of look like Muppets. It makes not a lick of literal sense, but visually, it perfectly sums up a band that broods darkly in the least threatening fashion imaginable.

Verdict
At least it (probably) won’t make you sterile!

Filed Under: On Repeat

See all On Repeat

The Elysium Trailer: The Space/Class-Warfare Revolution Will Be Televised